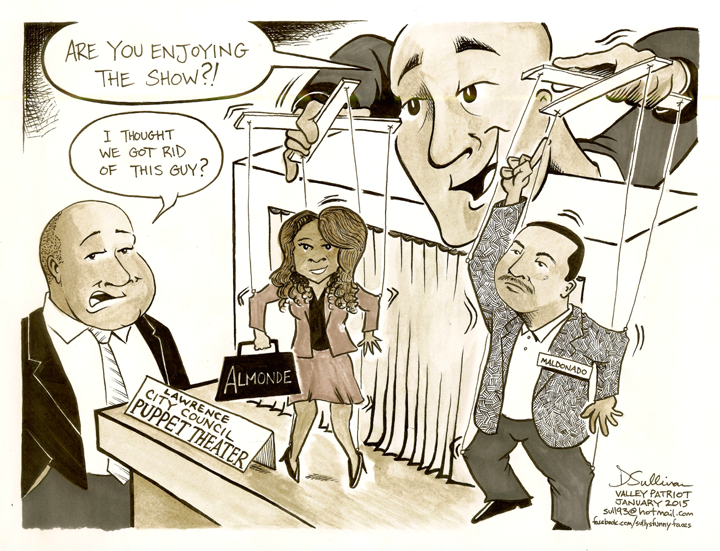 With all of the problems facing the City of Lawrence, the city council is focusing their efforts on protecting political hacks in city hall and attacking Mayor Dan Rivera.

Last month, the council considered a vote of “no confidence” in Mayor Rivera claiming he is playing politics with his firing of Lantigua appointees.

The narrative the city council wants people to believe is that Rivera is no better than Lantigua because he is systematically getting rid of city workers simply because they were appointed by or loyal to Willie Lantigua.

But, while President Maldonado and the other Lantigua operatives left over on the city council are desperate to equate Rivera with Lantigua the facts do not bear this out.

It’s true that Mayor Rivera has removed some Lantigua hires in city hall. But, what is also true is that unlike Lantigua’s first week in office back in 2010, Rivera has only removed a small number of city workers, most of whom were directly involved in Lantigua’s shenanigans and responsible for breaking the law.

To date, Rivera has fired or removed Lantigua’s comptroller David Camasso who refused to pay fired or laid off city workers under Lantigua despite the state law that says they must be paid.

Rivera also removed one of Lantigua’s wives from the city’s personnel department. Lantigua’s wife was caught illegally collecting thousands of dollars in home heating assistance while collecting nearly $100K as a city worker, and while Lantigua was living with her collecting more than $170K as both a state rep and the mayor of Lawrence.
Another person removed by Rivera was Rafael Tejeda, the election coordinator who once admitted he forged signatures on nomination papers and then certified those signature as genuine.

But there are many Lantigua hires or loyalist working for the city who have not been fired by Mayor Rivera.
This is a stark contrast to the Lantigua’s first week in office where he fired almost every department head and appointee of Mayor Mike Sullivan.

Another stark contrast between Lantigua and Rivera is that when Lantigua fired Sullivan appointees he violated the law and personnel policies of the city.

Rivera has yet to do that.

We find it hypocritical for Lantigua’s hacks on the Lawrence City Council to be calling for a vote of no confidence against Mayor Rivera.

In the four years of scandal, fraud and mismanagement under Lantigua’s administration, Lawrence City Councillors never once called for a vote of no confidence against Lantigua.

Even after Lantigua accused Lawrence firefighters of setting fires to make him look bad, accused police of trying to plant drugs in his car, invented a story of an unmarked police car trying to run him down, sending ambulances, fire trucks, trash trucks and police cruisers to the Dominican republic, layoffs of 24 police officers and 25 firefighters and the closing of two fire stations, yet never once did the Lawrence City Council consider a vote of no confidence against Mayor Lantigua.

We all know what is going on here. Lantigua’s allies on the council are trying to set the stage for Lantiua to return and run against Rivera in three years.

We call on the voters of Lawrence to pay very close attention to which councilors are involved in this effort against Rivera and vote them all out of office this November.

Lawrence needs to move forward and that cannot happen while Willie Lantigua is still pulling all the strings on the Lawrence City Council.