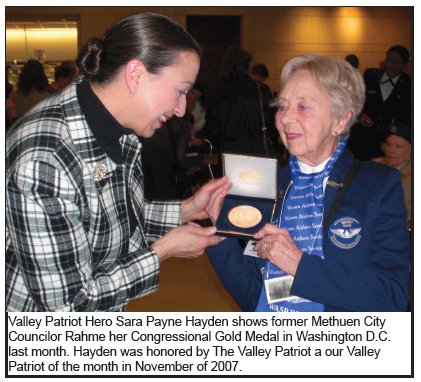 Born in 1919 at the foothills of the Blue Ridge Mountains in the little town of Granite Falls, Sara Payne Hayden would eventually be one of the 200 out of the 300 surviving WASP’s (Women’s Airforce Service Pilot) to travel to the Capitol to receive the Congressional Gold Medal of Honor in Washington, DC on March 10, 2010. It was the largest group to ever assemble at the Capitol for such an occasion with approximately 1700 people in attendance! I was lucky enough to be one of them.

When Sara Payne Hayden went to the movies one night in 1942, little did she know that her life would change forever. She would see a newsreel calling for female pilots and advertising the WASP program. Women were being called to enter the program to offer relief for male pilots who were needed in combat. She knew instantly that was for her. She really did not have the support of her family or friends and against all odds; she borrowed money and entered the WASP program at Avenger Field in Sweetwater, TX. She borrowed money to gain the necessary flight hours before her application and during these lessons many obstacles both financially and socially were overcome in order to complete her flight time.

Sara Payne Hayden became a WWII WASP and was a member of the Class of 1944-10. There would be 25,000 applicants into this program with only 1,830 acceptances. Eventually, only 1,074 women would graduate from this program.

It would be sixty-six years later that she would receive the highest civilian award from the United States Congress. She was joined by her son Dr. Shawn Hayden and grandson Dallas of Plano, Texas and grandson Derek Hayden, a US Marine from New Bern, North Carolina. Also in attendance were her niece Lynda (Payne)Phillips and her husband Lee from Beaufort, North Carolina, and some of her women friends from the 99’s and the Women’s Military Aviators (WMA).

Bestowing the award to this group was Speaker of the House Nancy Pelosi, D-CA, journalist Tom Brokaw, House Minority Leader John Boehner, R-OH, Senate Minority Leader Mitch McConnell, R-KY, and Air Force Lt. Col. Nicole Malachowski who is the first female Thunderbird pilot. Receiving the award on behalf of the Women Airforce Service Pilots was WASP, Deanie Parrish. I would be remiss if I didn’t mention Senator Kay Bailey Hutchinson, R-TX, Representative Barbara Mikulski, D-MD, Representative Ileana Ros-Lehtinen, R-FL, and Representative Susan Davis, D-CA who all led the way for these women to be recognized after all these years.

During WWII, these women were responsible for testing the aircraft that were shot up during the war and also for ferrying supplies. They were also used for target practice using live ammunition for gunnery trainees; they towed targets for ground to air anti-aircraft gunnery practice and targets for air-to-air gunnery practice. They were an experimental, non-military group until they finally received veterans’ status in 1977 from the federal government. Sara went to Washington with the WASP’s to testify. This was the G.I. Bill Improvement Act of 1977 and it granted these women full military distinction.

Her duty station was Randolph AFB, CIS. She was commissioned to the Air Force in July 1949. She served in active duty from August 1951-September 1953 as a Recruiting Officer.

Hayden’s activities in the community are well known. They include speaking engagements for various groups especially schools. She was the WASP representative at the opening ceremony of the WWII exhibit at the JFK Museum; Color Guard on women’s day at the Viet Nam Moving Wall; and “In Defense of Hanscom” Conference on January 30, 1995. She has been an active contributor at the Woman’s Texas University archives. She was featured on MCTV (Methuen Community Television) on the series “Call to Serve” that works with the Veterans’ History Project at the Library of Congress. She is part of the permanent exhibit at the Women at Work Museum in Attleboro, Massachusetts where she was also part of the keynote address for the Women Who Fly program at the museum.

Hayden is active in the Methuen Women’s Post 417 of the American Legion. She is the Past Commander, Life Member for over 50 years, Post Adjutant, Finance Officer and the Boys’ State Chair.

Hayden is a pioneer in American military history. She broke through barriers that most could never imagine. She trail-blazed through the skies and her work and sacrifices have made it easier for military women of today. Sara Payne Hayden takes every opportunity she can to educate others about the history of the WASP.

We thank you Sara Payne Hayden for your military service, for your undying loyalty to your country and your community. Congratulations on receiving your Congressional Gold Medal! You deserve it!