By ValleyPatriot on October 11, 2012Comments Off on VALLEY PATRIOT OF THE MONTH: Angelo Giambrusso 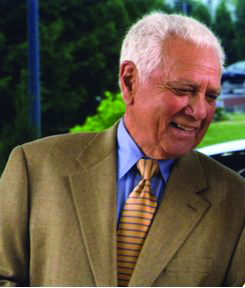 HERO IN OUR MIDST

Yet nothing compared to the dangers of Ploesti, for which he received double credit.

Angie was a navigator on the B-24 Liberator heavy bomber, the “Belle of the Orchard,” attached to the 720th Squadron, 450th Bombardment Group (H), 47th Wing, and 15th Air Force.

Ploesti seemed impenetrable. It had one of the best integrated air defense networks in Europe: several hundred 88mm and 105mm anti-aircraft guns secured the widespread area, while smaller caliber guns were hidden in haystacks, rail cars, and mock buildings. Three fighter groups were always on standby.

Unknown to Giambusso and his crew, a signals-intelligence station in Athens was continually monitoring and relaying the Allies’ planned bomb runs to Ploesti, picking up signals as far away as North Africa.

On one of Angie’s missions, his bombardier, who understood German, had picked up the Luftwaffe’s message that Americans were headed to Ploesti…

“We flew in formation so we had lots of fire power. But if a plane got separated or disabled, it became a sitting duck for German ME 109 fighter planes. You either got crippled or shot down. Our plane was badly shot up many times, crash landed a few. We were grateful for our fighter-plane escorts.”

Angie especially remembers one successful bomb run to Ploesti, probably their fiercest fighter attack encountered—and one that earned them a Unit Citation. It was April 5, 1944. A formation of forty B-24 heavy bombers, carrying the maximum payload of 8,000 lb., set course for Ploesti’s marshaling yards and refineries. Nearing target, the B-24s were aggressively attacked by 40 to 60 enemy aircraft firing rockets, cannon and heavy machine guns—trying to destroy the formation before they reached their target. Angie’s squadron, being in the lead, took the brunt of the attack. First the Germans attacked in pairs, threes, and fours—diving through the B-24s’ formation and up under the second attack unit. Then they attacked from all angles—many from the 6 o’clock position in formations of six abreast. Planes at the 10 o’clock position fired a volley of rockets. The battle raged about an hour. Through it all, the B-24s severely wiped out Ploesti’s oil supplies and marshaling yards, destroyed at least 27 enemy fighters, and damaged many more.

“Our plane was badly shot up and crippled. If it weren’t for the Tuskegee Airmen (the famed all-black unit) who came to our rescue, we would have been dead. We had to make an emergency landing but came through OK. I tell you, we were grateful! We had barely touched ground when one of our crew literally flew out the cabin door and spontaneously grabbed the biggest, tallest Tuskegee guy and locked him in a huge bear hug. That’s a sight I’ll always remember—that rural boy from the deep South will never forget who saved his life!

Giambusso also flew on strategic bombing missions to Yugoslavia, Romania, northern Italy, Germany, Poland, Czechoslovakia, Austria, Hungary, and the Balkans. In southern France, they supported the Allied landings on the coast under very difficult circumstances, with night take-offs and rendezvous executed with exceptional precision and skill. They often engaged in “shuttlebombing,” going from one target to another.

The heartbeat of a patriot

Angie’s military career spanned two wars—WWII and the Korean War—and two branches of the service. He went from flying on B-24 Liberator bombers in Europe to clearing land mines and building roads for the infantry and tanks in the mountains of Korea. The latter, he says, was far more grueling.

After his discharge in 1945 from the USAAF, he entered the reserves and was called up during the Korean War. By then an MIT graduate working as a mechanical engineer, he wanted to stay in his field so, after overcoming many hurdles, he transferred into the Army. He went before a board of three generals and was commissioned a 2nd Lieutenant in the U.S. Army. He later rose to Captain with the 13th Combat Engineer Battalion, Company A, which supported the 17th Infantry “Buffalo” Regiment, 7th Infantry Division.

From B-24s to land mines 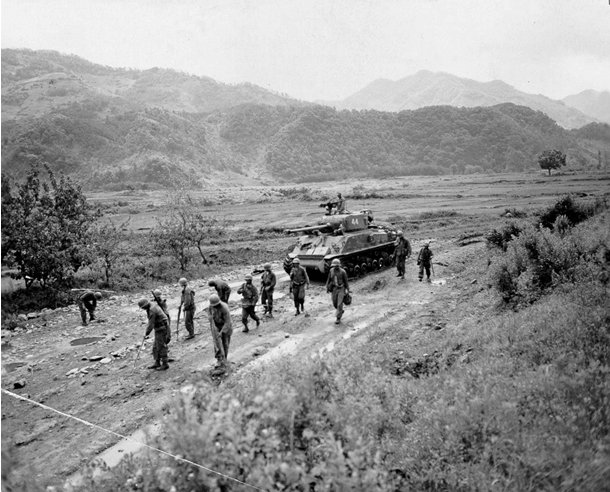 From September 1951 to September 1952, Angelo Giambusso served in Korea where he cleared both anti-personnel and anti-vehicle land mines. Early in the Korean War, the U.S. had set anti-personnel mines to protect the borders. These followed a specific pattern and were set with trip wires, making them easier to find. Far more dangerous and difficult were the “shoebox” mines laid by the Chinese Communists. These rectangular wooden boxes, about 1 ft. long, held a tiny explosive inside. They lay hidden under a thin layer of soil. “You had to push a prong to find them.” Most dangerous of all were the anti-tank or anti-vehicle mines. Much larger and often booby-trapped, they had to be exploded first.

Giambusso also did “lots of road work”—maintaining existing roads and building dirt roads on mountain ridges for Sherman tanks and the infantry.

He was awarded the Bronze Star for his “outstanding engineering achievements” during October 21, 1951, to August 20, 1952, in constructing a ridge-line tank road in the mountains during mid-winter despite the “tremendous hardships of weather and terrain.” He laid mines “under enemy observation and fire.” He “maintained supply lines despite landslides and washouts during the winter months and the spring thaw.” Nothing “thwarted the firm resolution of Captain Giambusso… (whose) determination and leadership…inspired his men…”

Angie Giambusso also received a Letter of Commendation as commanding officer for “outstanding performance of duty,” November 21, 1951 to January 6, 1952, in building a road through the mountains, needed for the supply and evacuation of troops, under “the most adverse conditions.” He not only stabilized existing roadbeds but also built roads closer to battle lines and a tramway that hauled supplies close to Hill 1243, near Kumhwa.

Angie Giambusso knows what it means to go through the fire, protected. Aerial battles over Europe. Crash landings. Enemy fire on mountains in Korea. Hidden explosives and land mines.

As the Lord promises: “Fear not…I have called you by your name; You are Mine…When you walk through the fire, you shall not be burned, Nor shall the flame scorch you…Fear not, for I am with you…” (Isaiah 43:1-2, 5).

Thank you Angelo for your service to our country and for being a hero in our Midst.