By Dr. Charles Ormsby on April 8, 2005Comments Off on Valley Patriot of the Month (April, 2005) – Haverhill’s Mike Buglione- Heroes in Our Midst 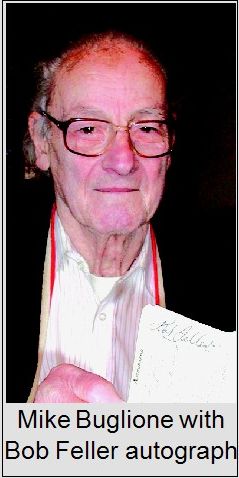 HAVERHILL, Mass. – Shortly after his 22nd birthday and nine months before Pearl Harbor, Michael Buglione went to his draft board and requested to be taken in the next round. Heck, he thought, it’s just “Goodbye dear, I’ll be back in a year.” Well, it was over four years before he returned from a Pacific cruise he will never forget.

The first few months of Army duty were routine. Buglione trained at Fort Devens and took part in maneuvers in North Carolina. He recalled with amazement how poorly the US was prepared for conflict. “We were training with wooden rifles and we put signs on trucks that said ‘I’m a tank’.” Buglione was assigned duty as a machine gunner but he never fired a machine gun until just a few weeks before facing hardened Japanese troops on Guadalcanal.

Buglione was assigned to the 26th Yankee Division at Camp Edwards on Cape Cod when the Japanese struck Pearl Harbor in December of 1941. He was arriving with a truckload of supplies and was told, “Don’t unload the trucks … just drive them to the rail yard.” – They would be needed more at the front than in a warehouse at Camp Edwards.

Most of the 26th Division was assigned to Europe, but Private Buglione knew he was destined to serve in the Pacific when he was told to get shots for the tropics. Shortly thereafter, he and several of his closest friends from Methuen were assigned to Task Force 6814-C (the “C” represented his first destination: New Caledonia) and were sent to the Brooklyn Navy Yard to board the USS Santa Elena, a cruise ship that had been quickly transformed into a troop carrier.

After passing through the Panama Canal and crossing the equator, the Santa Elena headed for Melbourne, Australia.

At this point, Winston Churchill nearly changed everything for Task Force 6814-C when he requested that Roosevelt send them to Malaysia to help British troops there. Luckily, Admiral King advised against this reassignment. That was fortunate, because shortly thereafter, the British troops on Malaysia were overrun and captured by the Japanese. 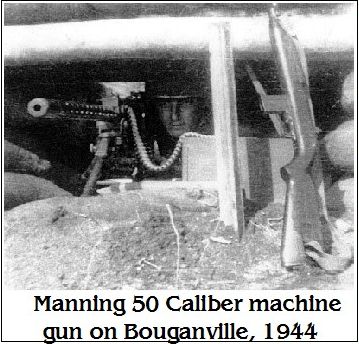 Buglione noted that the Japanese treated their British captives horribly. Most of the Brits died at the hands of their captors, some having been subjected to cruel medical experiments similar to those carried out by German “doctors” in European concentration camps. Had Churchill’s request not been refused, Mike Buglione’s wartime experience might have been very different.

After a short stay in Australia, Buglione was assigned to the Americal Division and put on a troop ship to New Caledonia which, after being there for a few hours, everyone called “Mosquito Hollow”. The mosquitoes swarmed all over everyone and you couldn’t get away from them. The lotions and mosquito nets helped … but only a little.

In New Caledonia, Buglione had his first chance to train with the Browning 50 caliber machine gun. Mike remembered that they arrived at camp covered with a cosmolene gel that had to be washed off with gasoline.

Shortly after the Marines landed on Guadalcanal, PFC Buglione was deployed to the island to protect American artillery batteries. One of his more repugnant memories was the stench of bodies (both American and Japanese) that filled the air and the flies that were attracted by the smell. The battles on Guadalcanal were so fierce and constant that neither side had the luxury of burying their dead.

Buglione also remembers the nightly air raids by the Japanese and the time that his unit’s howitzer fire gave away their position on Point Cruz to Japanese bombers who responded by dropping three 500 lb and one 2000 lb bomb near his position. They thought twice about firing their artillery at night after that!

Air raids weren’t their only threats to safety. Japanese artillery routinely lobbed shells at Mike’s position on Point Cruz. One Japanese gunner, nicknamed “Pistol Pete” by the American troops, survived the war and later corresponded with members of Buglione’s unit. Buglione spent approximately three months on Guadalcanal serving on Bloody Ridge, near Henderson Field, and on Point Cruz. His duty on Guadalcanal was terminated when the jeep he was riding in tipped over, killing one soldier and severely injuring Buglione’s shoulder. He was airlifted to the New Hebrides to recover.

Before rejoining his unit, Mike recalled several interesting encounters. While healing his shoulder and struggling with multiple bouts of malaria, he met Joe E. Brown [movie star 1928-1964] who was on a USO tour visiting the troops. Shortly afterwards, Buglione was hiking back from an evening meal with some buddies when a jeep pulled up and they were invited to “jump in” by Admiral William “Bull” Halsey [Commander of the South Pacific Area in 1942/43 and Commander-in-Chief of the Third Fleet in 1944] … quite a treat for a couple of hardscrabble soldiers! Also, during a brief stop on Tonga and Tabu, he encountered local natives who gave him a grass skirt in exchange for an old chino shirt.

In August of 1943, Buglione, still suffering from malaria, rejoined his unit which was now stationed on Fiji. It was during this period that he met Bob Feller, the great Cleveland Indians pitcher, who was serving as a gunner on the USS Alabama, and got his autograph.

During this same period, the American forces attacked the Japanese in the Philippines to fulfill Gen. Douglas MacArthur’s promise that he would return. The nearby picture of Mike, manning his 50 caliber machine gun on Bouganville, was taken shortly before he was sent to Cebu Island in the Philippines to support the Allied invasion.

Buglione witnessed the immense firepower of the US Navy as they shelled Cebu just prior to his disembarking from an LST on the beach. He recalls the trees being tossed around like matchsticks by the exploding shells. 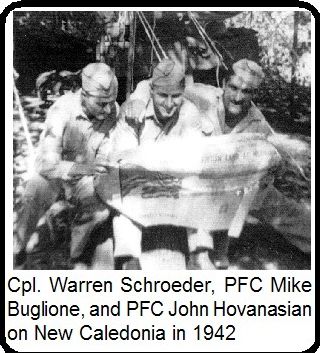 Probably the scariest threats were the attempts by Japanese soldiers to penetrate the Americal Division’s security perimeter at night. One night, the Japanese succeeded in infiltrating the unit’s right flank and a fellow soldier in a nearby bunker was killed and two others wounded by the Japanese using sabers. Sabers were used to keep the attack quiet so that the Japanese could make off with several 30 caliber machine guns. Mike was certainly lucky to be in a different bunker that night.

As the fighting subsided in the Philippines, some of the soldiers who had fought from the beginning of the war were able to go home. Those having 100 points or more were sent back to America. Buglione easily met this requirement having served for over three and a half years and in three major battles … he had 105 points.

As Buglione arrived in Pearl Harbor on his way back, he heard the news of our bombing of Hiroshima and Nagasaki … and the war was soon concluded. Buglione was discharged on September 1, 1945 … one day before the Japanese signed the Instruments of Surrender. Of equal importance to Mike Buglione is what happened exactly one year later. He married his wife Mary on September 1, 1946. Shortly thereafter he moved to Haverhill where he worked at the Robbi Shoe Factory for 23 years and Raytheon for 10 years. Mike has been a Haverhill resident ever since.

Corporal Michael Buglione, thank you for your service to your country.