By ValleyPatriot on January 31, 2020Comments Off on VALLEY PATRIOT of the MONTH ~ Fr. James Broderick – 39 Bombing Missions Over Nazi Germany in a B24 Liberator 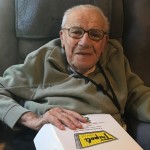 Originally hailing from Gloucester, Massachusetts, Fr. James Broderick is now a Catholic priest living in retirement at the Archdiocese of Boston’s Regina Cleri Home for Retired Priests. After graduating from Saint Ann’s High in Gloucester, with the Class of 1943, he joined the US Army Air Corp. Father Broderick completed his pre-deployment training in Biloxi, Mississippi and Sioux City Iowa, completing flight training and practice bombing runs across the Nevada desert before leaving for Europe.

Father Broderick served in the European Theater of Operations, reaching the rank of Master Sergeant before the war ended, and before he could even legally drink a beer. Fr. James “Jim” Broderick was assigned to the crew of a US Army Air Corp’s B24-H Liberator as a bombardier, flying during the air campaign against the Germans during the Second World War. During the war, US Army Air Corp crews, along with RAF and Free French Air Crews, bombed Germany around the clock. While serving with the 445th Heavy Bombardment Group as part of a 10-man B24-H Liberator crew, he flew on thirty-nine bombing missions, and an additional twenty auxiliary missions. This was the same unit that Hollywood actor James “Jimmy” Stewart served in. 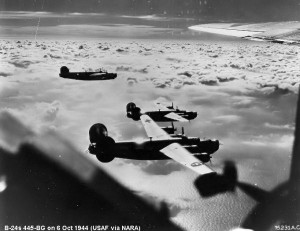 During World War II, there were three heavy bombers being flown by the US Army Air Corp, the B-17 Flying Fortress, the B-24 Liberator, and very late in the war, the B-29 Superfortress. How dangerous was bombing the Germans during World War II? On September 27, 1944, Fr. Broderick’s unit was on a bombing mission over Germany. The flight of thirty-five bombers was jumped by over one hundred and fifty German fighters. In the ensuing fight, twenty-nine German fighters and twenty-five American bombers were shot down. Only four of the thirty-five American planes made it back to their original base. The next day, only one was fit to fly! For the Unit’s service during World War II, the airmen of the 445th received the Distinguished Unit Citation.

After defeating the Germans and saving the world in 1945, Master Sgt. Broderick became one of the millions of American Veterans who were being demobilized after their service to our nation during World War II and returned to civilian life. Using his GI Bill benefits, he attended and graduated from Dartmouth College in Hanover, NH. After college, he worked as a banker for Old Colony Trust, reaching the rank of Junior Vice President.

During our conversation, Fr. Broderick told me, about the Irish waitresses treating him badly during business lunches at the Durgin Park Restaurant. The poor service and rude treatment continued until a coworker told the girls that they too, were Catholics. While working as a banker, he met a young woman and became engaged to be married. During his marriage preparation, he attended Catholic Retreat, it was on this retreat at St. Joseph’s Abbey in Spencer, Massachusetts, he made the decision to become a Catholic Priest.

One of his more interesting assignments as a priest, was ministering to Quechua Indians in Peru. The tribe was so remote, that Father Broderick often traveled by horseback while serving the tribe. Recently, at the age of 93, he had the opportunity to ride again at the Myopia Hunt Club. He also served at many local parishes, including Sacred Heart in Haverhill, MA, Our Lady of the Presentation in Brighton, MA and Immaculate Conception Parish in Newburyport, MA Although he grew up as an only child, his room at Regina Cleri, is covered with photos of the dozens of families he ministered to during his career as a priest.

Interviewing him, I learned that one of the most remarkable traits this man has is; the humbleness he displayed when discussing his life; as an airman, a college student, a banker, and a priest. During World War II all the 16.5 million men and women who served faced danger, and the prospect of dying at a young age. The risk was particularly high in bomber crews in the European Theater and submarine crews in the Pacific Theater.

Father Broderick talked to me about his bombing missions over Nazi Germany with the same demeanor and with the same ease, as he did during our discussion of his duties serving in a parish in Newburyport, Massachusetts. Truly a “hero in our midst”.
Please join us at the Dracut American Legion on RT 113 in Dracut, on February 15th, 2020, at 7pm as we pay tribute to US Marine Corp Veteran’s Phil and Don Everly with a free concert highlighting their music. Family event, with no admission.