By ValleyPatriot on December 6, 2019Comments Off on VALLEY PATRIOT of the MONTH ~ Gerard Boucher US Marine Corp-Retired; Still Serving Brother & Sister Veterans! 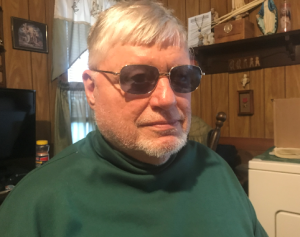 Haverhill’s Gerard Boucher joined the US Marine Corp to avoid getting drafted by the US Army. On the wall of his home sits a Bronze Star and three Purple Hearts, so he certainly picked an unusual way to avoid the draft.

Talking to Gerard and his close friend Carolyn for an hour or so in his kitchen, I felt transported back to the Merrimack Valley in the 1960s. Gerard graduated from Haverhill Trade Class of 1966, found himself in Vietnam in 1967 with the 26th Marines, and is now retired from the US Marines. He currently serves as the Secretary/Treasurer of the Massachusetts Regional Group of the Blinded Veterans Association. Carolyn attended Newburyport High, and said she was glad she was not a young man back in the 1960s, as many of the young men in her class ended up in Vietnam. She later graduated from Smith College and was once roughed up by the Boston Police during an antiwar protest. Both enjoyed 50s and 60s music in their youth, and still do. Gerard following Doo Wop bands to this day, he and Carolyn recently attended a Doo Wop concert together in Plaistow, NH.

After he was wounded, a relationship with a blind Veteran of World War II started Gerard on his lifetime journey of serving his fellow Veterans.

Throughout our meeting, Gerard asked me to help him spread the word of the great work of the Blinded Veterans Association. Wounded three times in Vietnam, while serving with the US Marines, Gerard’s only concern during our recent meeting was how many blind Veterans I currently know, and can I help him locate more of these men and women, so he can help them lead productive lives.

Not one of the Veterans from any branch of service or any era that I interviewed over the last two years, has ever boasted about their military service. Gerard is cut from the same cloth; he is focused on serving the needs of others. He took this spirit of humble service to our great nation to another level, with his constant probing questions about who I knew in the Veteran’s community, and how I can get other blind Veterans in touch with him, so he can assist them. 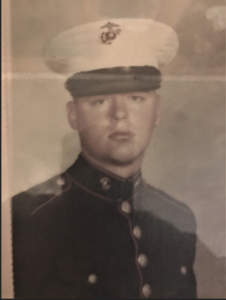 Barely out of his teens when he was blinded in combat, in Vietnam, during a mortar barrage on October 11, 1969. He recovered in the Chelsea Naval Hospital from his other wounds, but it was while there, he learned that his sight would not come back. His entire focus during our meeting was engaging me to help inform the public of the work of the Blind Veterans Association.

The benefits of joining, and the organization’s goals. Truly quite a hero, wounded three times defending our nation, he lives the spirit of “Semper Fi”, focusing on how he can do more for his fellow Veterans. Not one to focus on what he cannot do, he is focused on what he can do. Gerard earned a BA from Bradford College, a MA from Thornwood in the Netherlands, and a PhD from Atlantic International University based in Hawaii. His thesis was on “Multicultural and Social Justice”. This was written using JAWS speech software for the blind. He has written a book on his experiences in Vietnam and afterward, and both Gerard and I are looking for an editor and publisher for his book.

Meeting with Gerard made me question what, if anything, I am doing for my fellow Veterans. After attending the wake and funeral last summer of a young Veteran who died suddenly, leaving behind his small children I have been more focused on how the Veteran’s Organization I belong to, the American Legion, can help prevent us from attending more wakes and funerals of our young Veterans. How many problems can be solved by two Veterans meeting for a cup of coffee, or going for a hike, catching a Red Sox game, or even just having a beer together?

I remember about a year ago, a local Veteran was going to lose his job because he needed brake work done on his car so his car would pass the Massachusetts State Auto inspection, and his family simply did not have the funds. Solvable problem, but if this Veteran and his family cannot solve it, no car, means no job. My Legion Post provided some of the funds to get this repair work done, the funds were sent directly to the mechanic, who did the work. Never was I prouder to be a member of the American Legion than I was hearing this story at our Post’s monthly meeting. A few dollars from his fellow Veterans prevented a job loss that would have created even more financial problems for his family. Dracut American Legion members Bob Page, Roland Provencher, both Veterans of the US Air Force, and retired Dracut Veteran’s Services Officer Bill Zounes, a Veteran of the 82nd Airborne, for years have been the “tip of the spear” when it comes to helping Veterans locally.

Meeting with them over breakfast at Lowell’s Cameo Diner, they asked me to encourage Veterans to visit their fellow Veterans, at the Bedford VA, in local nursing homes or assisted living centers, or simply stopping by their house for a cup of coffee. All three understand young Veterans are correctly focused on family and careers, but all three believe in strength in large numbers of Veterans banding together for a common cause and ask all Veterans to join the American Legion.

Our challenge to all Veterans, from all services, and all eras, to visit these two organizations online, the American Legion and the Blinded Veterans Association, email or call their officers, learn more about both Veterans organizations, and how they are assisting Veterans. If you are eligible, join either or both online as well.

Further challenging our brother and sister Veterans is to find some small way to assist their fellow Veterans. It does not need to become a full or part time job, it could be as simple as a job referral or helping with a home repair. How about taking a Veteran to Muddy Waters in Methuen for a beer and a burger? Or down to Tripoli’s at the beach for a slice of pizza? It does not take much to make a fellow Veteran’s Day special! With that being said…

Happy Veteran’s Day to all!

Two Types of Blinded Veterans Association Membership
Life Membership: Impairment of sight or vision is determined to be service connected.

Associate Life Membership: Impairment of sight or vision is not determined to be service connected.

If you are a Veteran and have served on federal active duty in the United States Armed Forces at any time since December 7, 1941 and have been honorably discharged or are still serving in our Armed Forces, you are eligible for membership in the American Legion.

Because eligibility dates remain open, all current active duty members of the U.S. Armed Forces are eligible to join the American Legion at this time, until the date of the end of hostilities as determined by the government of the United States. This writer encourages active Navy, Coast Guard, Marine, Army, and Air Force personnel to help protect their benefits and honor their fellow Veterans by joining online or at a local Post.

https://www.legion.org/
The Dracut American Legion asks all World War II and Korean War Veterans to call 603-518-5368 and sign up for an Honor Flight to the Memorials in Washington DC!