By Tom Duggan on September 28, 2015Comments Off on VALLEY PATRIOT OF THE MONTH, HERO IN OUR MIDST ~ Harold Paragamian , WWII 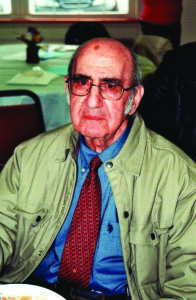 Mr. Paragamian, 90, took occasional classes at Merrimack between 1969 and 1998, earning an Associate’s degree along the way. A recent audit of his courses determined he is eligible for a Bachelor of Arts in Liberal Arts, which will be dated 1998.

An Army veteran of World War II, Mr. Paragamian earned four campaign stars during 14 months of fighting, from Normandy to the Rhineland, with the 113th Cavalry Reconnaissance Squadron. He retired in 1995 after 40 years working at Fort Devens in Ayer.

Merrimack College was founded in 1947 by the Order of St. Augustine at the behest of then-Archbishop Richard Cushing, who was responding to the concerns of a Merrimack Valley manpower commission that returning World War II servicemen needed to be educated for the civilian workforce. 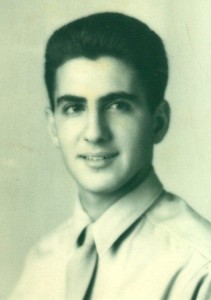 Mr. Paragamian has been active in the local Armenian-American community and a regular attendee of St. Gregory Armenian Apostolic Church.

The diploma was presented by Merrimack College President, Christopher E. Hopey in a ceremony in Our Mother of Good Counsel Chapel. Many of Mr. Paragamian’s friends and family attended and joined a reception after the ceremony.

Paragamian was featured in the Armenian Mirror Spectator back in 2010 where he talked about his service in WWII.
“You wondered if you would ever come out of it alive,” he said. “There were some bitter days. Not only was it devastating to see your own men killed, it was also painful to see Germans die. The human element is very close to me.”
His military service spanned four decades as a Civil Service employee working in the Army Post Exchange at Fort Devens, Ayer, whether it was as a forklift operator or sales advocate, before retiring in 1995.

“Through the grace of God, I have much to be thankful for,” he adds. “I count my blessings each and every day. World War II veterans are dying every day. Hopefully, I can still make a small difference.”

VALLEY PATRIOT OF THE MONTH, HERO IN OUR MIDST ~ Harold Paragamian , WWII added by Tom Duggan on September 28, 2015
View all posts by Tom Duggan →