By ValleyPatriot on January 31, 2017Comments Off on VALLEY PATRIOT OF THE MONTH – Hero In Our Midst ~ Larry DeBenedictis 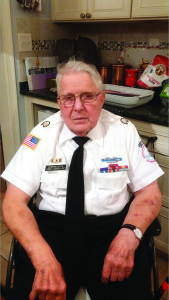 When I met Larry DeBenedictis, he had just returned home from a wake for an old friend. That friend was U.S. Army LT. Colonel John W. Watson Jr. He passed away unexpectedly at the age of ninety. LT. Colonel Watson was a fellow Korean War Veteran and had spent 3 ½ years as a POW. Larry reminisced about their friendship and wondered out loud how his good friend had done so well in life after all he witnessed during the war.

Larry’s modesty about his own military service is something I’ve encountered quite a bit lately. While interviewing veterans, they are always more concerned about their fellow soldiers than themselves. As a matter of fact, the very first thing Larry said to me was, “Beth, I just want to clarify that I’m no hero.” I looked at him almost defiantly and said, “I’m sorry sir, but I strongly disagree. Whether you saw combat or not is irrelevant. You unselfishly served OUR country and therefore, you are a hero.”

Lawrence Robert DeBenedictis was born in Medford, MA on June 4, 1929, and was one of twelve children. His father a Master plumber had hoped Larry would join him in running the family plumbing business.

After high school, Larry attended Franklin Tech in Boston and took courses in plumbing, heating and air conditioning. He received a master plumber’s license at the age of twenty one making him one of the youngest licensed plumbers at that time. With his skills, Larry had an interest in joining the Navy but was drafted into the Army before he had a chance to enlist.

He was drafted on August 17, 1951, at the age of twenty two and became a Corporal in the Army.
Larry was sent to Korea to help the South Koreans fight against the Communist army of North Korea. While serving, Larry showed leadership skills and was put in charge of a squadron. He would have anywhere from eight to ten men under him. Their assigned combat area was vastly out in the open. Because of this, they did most of their patrol work during the night time hours so they could stay hidden from the enemy. The squad would venture out into “no man’s land” far from their trenches and string coils of barbed wire in the hopes of slowing down the enemy. Larry was always careful not to go into territory that hadn’t been cleared of land mines.

One night, Larry and another soldier stopped the barbed wire coils half way across the perimeter. A higher ranked officer told them it wasn’t safe to stop there and to continue with the wire. Not able to ignore a direct order from a superior, Larry and the other soldier continued on. Suddenly, there was an explosion! Larry had stepped on a landmine. 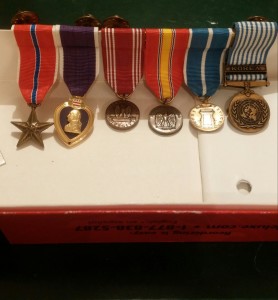 He remembered waking up and looking down at his shredded clothes. One leg was severely injured while the remaining limb was a mere stump bleeding profusely.

The other soldier had been taken away to an aid station but Larry was left behind as they incorrectly assumed he was dead. Larry knew he needed to tie off his legs to stop the bleeding.
A couple of other soldiers at the scene helped fasten makeshift tourniquets. A medic finally arrived and shot Larry full of morphine. The medic marveled that he was still conscious and talking. Larry told the medic that if he stopped talking he would surely die. After eventually reaching the aid station, Larry was heavily dosed with morphine and finally rendered unconscious.

The next time he woke up was in a hospital in Japan. However, before being shipped stateside, gangrene set into Larry’s remaining leg and it had to be amputated. He finally arrived home in America in 1952 and was sent to Walter Reed Military Hospital in Maryland. By April of 1952, Larry was back home in Medford, MA.

While Larry was in the service overseas, he was receiving letters from a young woman. Her name was Carol and she was a friend of one of Larry’s sisters. Carol waited anxiously for Larry to return home and when he did, the courtship began. In November of 1953, Larry and Carol married and moved to the town of Billerica, MA. They had two sons.

Being fully disabled, the army retired Larry and he was given a stipend but it wasn’t enough to live on. Larry then went to VA Tech College (some of the tuition was paid by the government) and he got a job as a building inspector for the town of Billerica.

Like all amputees in the early days, Larry was fitted with wooden legs. He was able to use crutches to do his job as a building inspector. As the years went by he would be fitted with more modern prosthetics, the most recent one being computerized.

Presently, Larry is as independent as he can be. He drives a specially equipped van (paid for by the Veterans organization). He does errands and enjoys food shopping. He clips coupons and buys food to bring to the Billerica Food Pantry. Larry spends around $300 on each monthly visit to the pantry.
Larry is still active in his military organizations: the DAV Disabled American Vets, Korean War Vets Association both the Greater Lowell and Boston chapters. He attends veteran functions, parades and of course the funerals of his fellow veterans. He also spends a great deal of time at the Bedford VA Hospital where he visits the veterans and other soldiers.

As we were wrapping up the interview, Larry’s wife Carol showed me the medals he had received. In a small, delicate box was the Army CIB (Combat Infantry Badge), the Bronze Star – V for Valor, a Purple Heart, Good Conduct Medal and two Battle Stars for service in Korea.

These medals reveal only a fraction of the story concerning the bravery of Corporal Lawrence Robert DeBenedictis. This is the same gentleman who at the beginning of our visit tried to tell me he wasn’t a hero. We beg to differ! It was an honor to meet him and a privilege that he allowed me tell his story. Thank you for your service, sir!!

Beth D’Amato, Heroes in our Midst