By ValleyPatriot on December 28, 2018Comments Off on VALLEY PATRIOT OF THE MONTH – HERO IN OUR MIDST: Peter Fantasia, 102-yr-old World War II US Army Medic 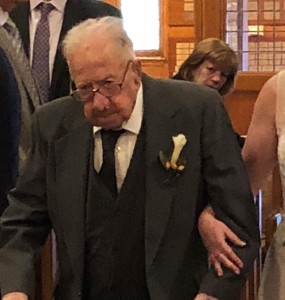 Somerville’s Peter Fantasia, now living in Reading, Massachusetts at the Artis Senior Living, vividly described to me how he got captured near Rodalbe, France. While serving with Lima Company, of the 3rd Battalion, of the 104th Regiment, of the 26th Infantry Division, the “Yankee Division” as an Army Medic, he was tending to two wounded American soldiers, an NCO and an Officer, when a German Infantryman with the 11th Panzer Division cornered the three Americans in their fox hole. Peter said to the wounded American sergeant “I’ll dive right, you shot him”, to that the German soldier replied, in an American Southern drawl, “I would not do that if I were you”. The three American soldiers had the misfortune of being captured by a German soldier who was raised in Arkansas.

For his book and film, Band of Brothers, Stephen Ambrose interviewed Technical Sergeant Donald George Malarkey, who was a non-commissioned officer with Easy Company, 2nd Battalion, 506th Parachute Infantry Regiment, in the 101st Airborne Division of the United States Army during World War II. Don Malarkey recalled a very similar incident, but with reversed roles, when he asked a German soldier who was recently captured by the US Army, where he was from, Sgt Malarkey was shocked when the man replied in perfect English, “I am from Oregon!”

What were these two young German Soldiers, who were raised in the United States, even doing in Germany? Economic conditions in both the United States and Germany were very bleak during the Great Depression, and facing anti-immigrant sentiment in the United States, many Germans and Italians returned to Europe. These immigrants left because, perhaps because being poor and hungry with your extended family in your native land of Italy or Germany, was better than being poor and hungry in the United States. In the States, during the Great Depression, the immigrants found themselves surrounded by equally poor, but native born Anglo Americans, who did not want them in their neighborhoods, their factories, or applying for scarce American jobs. My interview with Peter confirmed that this anti-immigrant sentiment existed even in Somerville, Massachusetts. Peter recalled how his father could not purchase a home in certain Somerville neighborhoods, due to the fact that he was a recent immigrant from Gaeta, Italy. Many German immigrants in the United States and Canada, where also German Nationalists, and returned to Germany when Hitler rose to power and encouraged all Aryan’s to return to the Fatherland.

Peter’s Italian immigrant father was now a proud American, and consider Somerville, their new home during the Great Depression, so the family stayed in the US. In 1941, American singer Horace Heidt’s hit song “Goodbye Dear I’ll Be Back In A Year”, was about America’s Peacetime one-year draft. Drafted in 1940, the song reflected Peter’s personal military situation at the time. Peter trained for a year, with fellow his draftees, mostly men from Massachusetts and the other New England states. The 104th Regiment then rotated back to Camp Edwards, Massachusetts after their year of unit training, the Regiment arriving on December 6, 1941. Most of the men in the unit were excited to be discharged soon, their required year of training complete. Events of December 7, 1941 changed all their lives forever. 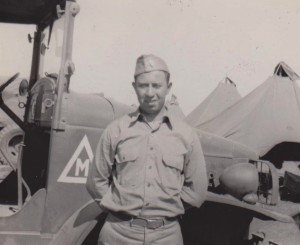 Educated in Somerville Public Schools and studying for a period of time at Northeastern University, Peter owned the Highland Food Shop in Somerville before the war. He sold the shop to a cousin when he was drafted. While in the US Army, Peter married an Irish girl, Mildred Mooney, on May 7, 1944 (despite the efforts of Peter’s Italian mother to derail their courtship) Looking at the mischievous grin on Peter’s beautiful bride’s face in their wedding photo, makes this writer wonder what she was thinking when the photo was taken on her wedding day.

After intense training in the United States Peter’s unit left for Europe, and landed in Cherbourg, France on September 7, 1944. Military training even during peacetime, is very arduous, and even dangerous for American servicemen. During their training period in the Florida Keys, Peter’s unit was required to remain behind during a hurricane evacuation. The Soldiers lashed themselves to bridges to avoid being sweep away by wind and water. I’d like to remind the readers, that in the 1940’s the US population was around 132 million men and women of all ages. 16 Million American men and women served in the US Military during the war. So why do we call Peter and his peers, the “Greatest Generation”? Because 15% of the total US population in 1941 served in the US Armed Forces, and among fit men aged eighteen to thirty, a better answer is almost all of them enlisted or where drafted. During one of my other Veteran interviews this summer, the man told me that at his high school, his class, the Class of 1943, every man was either drafted or volunteered.

Today’s youth? Consider a recent article in the Navy Times published in 2018, the article stated that most military planners agree that only around 17% of our current high school seniors, male or female, would be accepted for military service. Military officials feel that physical fitness, mental fitness, moral fitness, and even functional literacy is lacking in many of today’s American High School Seniors. Of even more concern to today’s military leadership, is that many of the best and brightest of today’s aged youth, have so many career options, few are considering military service.

Captured by the German Army’s 11th Panzer, Peter spent time in Stalag III-A, Stalag III-F, and Stalag XII-A. He had two advantages that helped him survive the POW Camps. He did not smoke, which made his Red Cross issued cigarettes extremely valuable. Peter could trade his cigarettes for food and other essential items. The second was, as a Medic, he was not put on work details. Captured on November 12, 1944, Peter was in the POW camps until liberated by the Russians on April 28, 1945. The Russians, kept Peter and his comrades as a “guest”, for a few more weeks. This was a common practice, with the Soviet Union “billing” the United States for the soldier’s food and medical care.

Rumors of Allied POW’s liberated by the Russians being kept in captivity by Soviet Dictator Joseph Stalin after the war persist even today. No direct evidence is known to the American public of live Allied soldiers being held by the Russians after the war. In 1992 US President George H. W. Bush and Russian President Boris Yeltsin formed the Joint US-Russia Joint Commission on POW/MIA’s. The only American Veteran’s Organization invited to this conference was the Veterans of Foreign Wars. Both sides have since turned over remains of military personnel to each other, returning the remains of these fallen heroes to their families. But the American Public is in the dark as to whether either the American’s or the Russians held each other’s military members against their will after World War II or during the Cold War. We liberated their POW’s and they liberated our POW’s. One can only hope the politicians on both sides turned the soldiers over to their country of origin?

Peter returned home on September 28th 1945, reading his Silver Star citation, awarded to him for his bravery on November 12, 1944, I learned that he was missing in action, or MIA when he was awarded the medal. The Silver Star is the US Military’s third highest combat decoration. Only the Medal of Honor and the Distinguished Service Cross rank higher. But I cannot help to think the real hero might have been his wife Millie, his young Irish-American bride, recently married, stuck in Somerville with a suspicious Italian mother in law?

Peter and his wife, whom everyone called Millie, had two sons and two daughters. His cousin not wanting to sell him back the store, after the war, Peter worked for the US Post Office in Somerville until he retired. They now have nine grandchildren, four great grandchildren, three great, great, grandchildren with a fourth on the way.

At age 102, Peter Fantasia walked his granddaughter Kathryn down the aisle on her wedding day on October 13, 2018. Her own dad died in 1999, and Peter considers escorting her down the aisle, one of the greatest moments in his life. How tough was this generation? As a young man, Peter, stayed behind when overrun by the Nazi’s, tending to his wounded comrades, earning the Silver Star while listed as Missing in Action. A 102 years old, nothing would stop Peter from walking his granddaughter down the aisle at her wedding.

A very warm thank you to Peter’s daughters Martha and Annette for writing this with me. Much of the article came from the four of us, Peter, Martha, and Annette talking one afternoon. Peter’s grandson Brendan Gillis wrote a great report on his heroic grandfather back in 2003 for school, which I used as a template for this article. (He got an A). The article by William Shelton in the Somerville Times on July 1, 2016 was equally valuable to my research on this American Hero. I was honored to read his actual Silver Star citation, awarded when he was still listed as Missing in Action.

John Cuddy served in the US Navy’s Construction Battalions (known as the Seabees) after retiring from the Navy, he used his GI Bill and earned a BA in History and an MA in Economics from the University of Massachusetts on the Lowell Campus. He has been employed in Logistics at FedEx for the last 21 years. If you know a World War II Veteran who would like their story told, please email him at John.Cuddy@Yahoo.com. ◊