By ValleyPatriot on April 15, 2013Comments Off on Valley Patriot of the Month – Hero in our Midst: SGT ROBERT A. HUNTER, U.S. MARINES 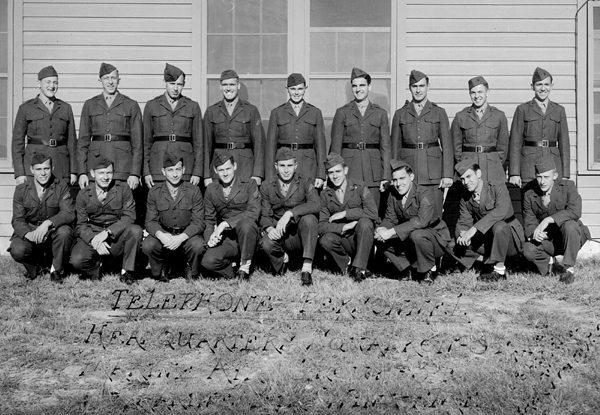 The “island hopping” strategy in the Pacific had proved successful as the Marines secured one island after another in their advance toward the Japanese mainland: Roi and Namur in the Marshall Islands (February 1944), Los Negros (March 1944), Wake Island (May 1944), Saipan and Guam (July 1944), and Tinian (August 1944).

But instead of Peleliu, Bob and half his group ended up on Midway Island that September with the 3rd Marine Aircraft Wing, VMF-324 (fighter bombers). Their job: retrain land-based Corsair F4U fighter pilots to operate from aircraft carrier decks—even more urgent since Japanese “kamikaze” (suicide) pilots began attacking U.S. ships.

Bob was bitterly disappointed. He requested a transfer to Peleliu with the ground troops. His commanding officer grew livid. “Rising slowly from behind his desk—he looked 7 feet tall!—the veins in his neck and arms bulged.

A deep red flush crept up his neck and spread across his face. Clenched knuckles gripped the desk. Finally, he barked, ‘Get back to your barrack! Get down on your knees and pray you’ll eventually make it Stateside!’ ”

Bob’s CO, it turned out, had been a fighter pilot at Guadalcanal when he was captured by the Japanese and tortured as a POW. He finally managed to escape. The CO’s decision probably saved Bob’s life. The Battle of Peleliu in September 1944 turned out to be one of the bloodiest battles in the Pacific War, with reportedly the highest casualty rate of any amphibious invasion. Some 80% of the Marines who had trained with Bob died in that battle.

Bob’s life was spared for a purpose. Like many veterans, he wondered why. The answer, in part, would come decades later. 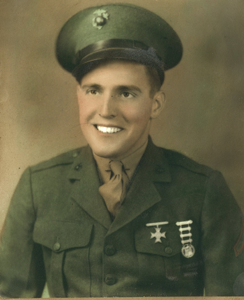 Since April 1944, when the Corsair F4U was finally cleared for carrier-based takeoff and landing, there had been a scramble to retrain land-based fighter pilots. Since existing carriers could not be spared, and were also subject to submarine attacks, one solution was to convert the paddle-wheel steamers on the Great Lakes into training vessels—in the safety of Lake Michigan. Their decks, however, were only two-thirds the length of a fleet carrier’s.

Midway Island, half-way between San Francisco and Tokyo, had access to complete aircraft facilities since Pan-Am World Airways used it as a stopover and refueling station. Its paved runways were marked off to the precise dimensions of a carrier deck.

It was there on Midway that the “Bent-Wing Gull”—the Corsair F4U fighter-bomber with folding wings—met the Albatross or “Gooney Bird,” so-called because of its hilarious 25-step courtship dance, shrill whistle, and comical antics.

The Japanese called the Corsair F4U “Whistling Death” because of its speed (more than 400 mph), maneuverability, 4,000-pound-bomb payload capacity, and kill ratio of 11:1. American troops called it the “Sweetheart of Okinawa.” The F4U became one of the more popular, although controversial, fighter planes.

Since Midway was nesting home to the Albatross and dozens of other species of birds—including the bo’sun bird that can fly backward—paving the runways helped drive the Albatross to relocate. Inevitably, however, flocks would return, flying onto the runway.

“We were very careful, very protective of those birds,” Bob Hunter recalls. “They loved to perform by dancing together. They strutted and pranced around, whistling or making gurgling noises in their throat.” Whenever the “Gooney Bird” met a man or a 10-ton truck, it would bow low but refuse to get out of the way. They had absolutely no fear of man.

The island’s rats were another matter. “We slept next to the aircraft in revetments—tent-shaped dugouts covered with sandbags. Rats crawled over us at night, gnawing on our fingers if our hands were exposed,” he recalls.

Although a land-based telephone communications specialist, Bob went on one surprise “bombing mission.” It’s one he will never forget.

On Midway he ran into an old friend from Tewksbury High, a Marine pilot of the Dauntless SBD-2 dive bomber. SBD-2 fighter pilots trained by dropping bombs on Wake Island after the Japanese had reclaimed it. “C’mon. I’ll take you for a spin,” he said. Bob couldn’t resist the offer.

The SBD-2 was the chief Allied dive bomber in the Pacific Theater. From an altitude of 25,500 feet, the pilot literally dove at a steep angle over the target—dropping up to 2,250 pounds of bombs. It sank more enemy ships than any other aircraft in the Pacific.

Little did Bob know that he was in for the ride of his life. “Now when I drop my bomb and pull out of my dive,” his friend said, “you yell as loud as you can and open the canopy above your head. That will help me regain altitude…” Of course, it was a joke, and the force of gravity left Bob totally speechless and unable to lift a finger!

Saving lives one at a time

After the war, Bob joined the family business as an orchardist, caring for acres of fruit orchards. A powerful truth came alive for him. Good trees, like good people, bear good fruit. Bad trees bear bad fruit. Bob knows his life was spared for a purpose and he reached out to help others, counseling teenagers and visiting the elderly in nursing homes.

Along the way he learned some lessons.

At the age of 30, Bob returned to finish college, got his Master’s, then earned an advanced certificate toward a doctorate in education and counseling. All the while he worked several jobs to support his growing family. “I became a workaholic. I focused on making money. I even accumulated quite a tidy sum—only to lose it all virtually overnight. Since then I counsel young men, ‘Spend quality time with your family. Don’t let ambition or the love of money consume you.’ ”

A former school guidance counselor who practices “active listening,” Bob has seen lives transformed. A struggling young girl, later diagnosed as a schizophrenic, was directed to the therapist who helped her. An 18-year old boy, a high school dropout hooked on alcohol and drugs—who looked on Bob as the father he never had—took Bob’s counsel. He got help, then entered a special high school diploma program (higher than a GED) that Bob had helped to establish at Middlesex Community College. He graduated as class valedictorian, received a $500 college scholarship, and studied culinary arts for a future in restaurant management.

Recently, Bob took in a destitute man—without money, job, or place to live— who had spent his life savings caring for his elderly, terminally ill father. He found the man a home, a job, and soon the man will be baptized at First Baptist Church of Tewksbury, where Bob is a trustee.

New life. New hope. Jesus said, “Do not lay up for yourselves treasures on earth, where moth and rust destroy and where thieves break in and steal; but lay up for yourselves treasures in heaven, where neither moth nor rust destroys and where thieves do not break in and steal. For where your treasure is, there your heart will be also” (Matthew 6:19–21).

Thank you Sgt. Hunter for all you have done for our country and being a Hero in Our Midst.