By ValleyPatriot on January 23, 2013Comments Off on Valley Patriot of the Month – Lawrence Native Fred Pietrowski, U.S. Navy

LAWRENCE – It was early 1961 during the Cold War. The United States had just closed its embassy in Havana, Cuba. The Cuban Missile Crisis would not come to a head until one year later, in October 1962—the closest the U.S. and the Soviet Union ever came to a global nuclear war.

Fred Pietrowski, U.S. Navy, of Lawrence, Mass., was an electrician aboard the submarine USS Angler (SS240) when a goodwill tour to New York suddenly turned into a chase to drive off two Soviet diesel subs and capture a Soviet nuclear sub. Few know about that incident in early 1961 when Pietrowski discovered three submarines hiding near the Statue of Liberty, long before any major confrontation between the two world powers.

From the port lookout, Fred had focused his binoculars on the Statue of Liberty, only 800 feet away. Suddenly he saw a Soviet periscope pop up out of the water only 300 yards from the Statue. When reported to their New London, Conn., base, the order came: “Chase him!”

Minutes later, Fred saw a second Soviet submarine hiding only a half-mile from Wall Street! Again the order: “Chase him!”

Then they heard the turbine whine of a nuclear sub. The unmarked sub refused to identify itself! This time, they were told: “Ram him!”

Instantly, five U.S. submarines sped to the scene. All six American subs spent three days, 24/7, trying to capture the Soviet nuclear sub for its technology. “We chased it all the way down the coast to Virginia, where it took off.”

Three Soviet subs hiding, undetected, in New York harbor! “Each missile on a submarine has 157 nuclear warheads—enough to blow up the East Coast from DC to Boston,” Pietrowski points out. “Surely, God was protecting us.”

Fred joined the Navy in 1959, after graduating from Central Catholic. His life in the Navy and civilian life has been a series of miraculous escapes from the jaws of death, literally.

In October 1962, Fred was deployed to the Mediterranean on a three-week patrol, a secret mission, aboard the submarine USS Entemedor (SS340). Under Sealed Orders.

“Not even our captain knew where we were heading or our destination. If anything happened to us, we were told, ‘You were never there!’ ”

Unknown to them, it was the beginning of the Cuban Missile Crisis.

“We went into ‘ultra quiet mode’—like a ghost ship floating through the ocean depths. No air conditioners. No unnecessary movement. I took only twenty-one steps from my bunk to my workplace, and only seven steps to eat. No emptying garbage at sea (the enemy could track us).

“For three weeks we endured suffocating heat without a shower—140 degrees where I worked, 125 degrees in the rest of the boat. It hurt to breathe though my nose. The stench of rotting garbage filled our nostrils.

“After two weeks, our main electric propulsion motors began to overheat. Now at 179 degrees, they would automatically shut off at 180 degrees, forcing us to float to the surface—like a “sitting duck!”

“We took photos through the periscope for intelligence gathering—without any idea of what we were photographing—missile sites, installations, or vessels. We laid 36 mines at a time. Finally, mission accomplished, we left the area undetected and surfaced. 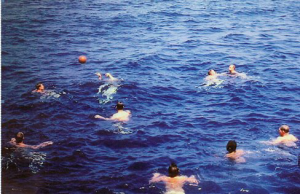 “Once far removed from our mission zone, the captain stopped our sub and with engines running let us cool off with a swim. Two men were posted on shark-watch, armed with M-1 rifles. We splashed around, playing basketball with the five officers.”

“I saw a gigantic black fin, over a foot high, moving swiftly toward us! It was a 35-foot long Great White Shark, our captain later told us. At the slightest movement in the water, it will attack at speeds to 15 mph.

“A football field away lay our submarine…

“To the torpedo-shaped shark, our submarine looked, and smelled, like its prey, a large black whale: round, with wide black diving ‘fins’ in the front and back. The exhaust of our diesel engines sprayed fishy-smelling bilge water along with smoke.” The Great White, naturally curious, swam up alongside the sub and kept taking sample bites of the submarine—first circling one way, then the other—hour after hour. “Whenever the shark swam to the other side, we would swim toward the sub. Whenever he came toward us, we formed a tight group and floated, holding still.”

One hour went by. Two. Three…After six hours, with the hungry shark still circling the sub, the captain yelled, “It’ll be dark soon. Come in, or I’ll have to leave you here…”

“We had no choice but to swim toward our sub—and the hungry shark.

“When we were 100 feet from our boat, we made a dash for it. But there was only one set of foot holes leading up to the deck—and sixty-five men in the water!”

Fred was among the last twelve remaining in the water when he heard, “Here he comes!”

“The Great White headed straight for me, passing right under my bare feet! His mouth opened wide—exposing multiple rows of 300 serrated teeth!

“At one point he was only 8 feet away, staring at my chest!

“Miraculously, we all made it to safety.”

Leaving the Mediterranean from that mission, the Entemedor headed straight into the North Atlantic Ocean and into the teeth of Hurricane Ella, with its 115-mph winds that tossed them like a toy boat for days. “With less than one day’s air supply, we could not submerge. We had to ride out the hurricane.”

“On day four, a 120-ft high rogue wave—an almost vertical wall of water—slammed us broadside. I was tossed 20 feet through the air. Our sub rolled radically to the right—stopping at a 57-degree angle (a 54-degree angle is the point of no return). All oil drained out of engines. We lost power. There we hung, in total darkness!

At that radical angle, over a thousand gallons of sulfuric acid would spill out from batteries. If mixed with salt water, it would form a deadly chlorine gas that spelled instant death.

“In that darkness, with hydraulic oil flowing all over the tiled deck, I crawled over pipes and cables, feeling my way to the main battery switch, finally found it and turned it on. Immediately the lights and power came on, the engine propellers began to turn. Slowly the submarine rose to a vertical position. The fact that we survived is a miracle.”

It took them eleven days to cross the Atlantic.

“Before arriving in New London, we posted armed guards. This was unusual. Waiting at the gate were Marines, standing shoulder to shoulder, armed with machine guns. The Cuban Missile Crisis, we learned later, had begun.”

Fred’s escapes from death also include: Almost falling on the back of a 16-foot shark. Being trapped in a sealed compartment filled with 12 feet of water. Submarine rammed, cut in half, and sunk—twice. A head-long fall that split open his skull, with doctors giving him up for dead.

Fred bears witness to the Navy hymn, “Eternal Father, Strong to Save.” From experience, he knows the Biblical truth: “The eternal God is your refuge, And underneath are the everlasting arms” (Deuteronomy 33:27).

Thank you Fred for your service to our country. You are truly a Valley Patriot and a Hero in Our Midst!