By Tom Duggan on February 5, 2010Comments Off on Valley Patriot of the Month: Robert “Bob” Ahern

Hero in Our Midst 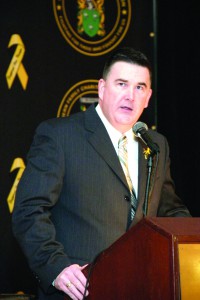 A hero is often considered to be someone in the forefront of a scenario and highly visible to a large audience. I want to tell you about a more behind the scenes kind of hero– the type of hero that so often goes unnoticed. This particular gentleman, whom I had the privilege of interviewing, is perfectly content not to be recognized, but simply wishes to make a difference in the lives of America’s most forgotten homeless Veterans, and for the deployed troops and their families.

Robert “Bob” Ahern is that type of hero. He grew up in a military family. His Father was a Sergeant in the Marines. Shortly after high school Bob decided to follow in his father’s footsteps and enlisted in the Army where he served as a specialist. After completing military service he became a State Trooper for Massachusetts—a career he has had for twenty-two years. His younger brother, Steven, also served in the Marines as a Sergeant, and then went on to become a Police Officer and also serves in the National Guard. Another brother, Chris, works as a Police Officer. Public service is clearly at the heart of this family. Bob lives in Stoneham, Massachusetts with his wife Eileen and their three daughters: Riley 16, Shannon 15 and Karrin 13. Bob had planned on attending a special event honoring Medal of Honor recipients that was to be held on September 14th, 2001. We all know how devastating September 11th turned out to be that year, and the event was rescheduled until later in October. Bob says he was deeply moved by the patriotic speeches, and one in particular about the ongoing plight of our homeless veterans caught his attention. He fell asleep that night thinking about it.

When he awoke the next morning he suggested to his wife that they should host their annual Saint Patrick’s Party at a hall instead of their home and charge a fee to donate to the homeless veterans. His wife agreed, and she was thrilled to not have to do the dishes and all the clean up. That is when his vision came to life. Bob went to the Montvale Plaza in Stoneham, Massachusetts, and explained what he was doing. The staff there thought his idea was great and told him to expect about a hundred people. The hall that could hold three hundred was filled to capacity, and he raised $10,000. The year following the start of the war in Iraq Bob moved the growing fundraising event to the Burlington Marriott. He then filed for non-profit status making the “Ahern Family Charitable Foundation” official. During his second and third years he was raising $40,000 and selling out the 500 seats. By the 4th year he once again had to find a larger hall– the Quincy Marriott. Now in its ninth year, attendance reaches six hundred and is a jacket and tie or military dress occasion with dinner and dancing as well as guest speakers. This year Bob has two Medal of Honor recipients being flown in to speak at the event: Tom Kelley, Secretary of Veterans Affairs who served in the Vietnam War and Tom Hudner who served in the Korean War. They were both in the Navy.

Each December Bob also hosts a smaller family style event called “Operation Ensuring Christmas” at the Bostonville Grille in Lynnfield Massachusetts. This Army / Navy event offers a football type luncheon where kids can play video games while parents socialize. The money raised provides gifts to military families having difficult times financially. As Bob points out many who are called up for duty leave behind jobs where they were earning as much as $1000 a week and now on active duty may only be making $1500 a month. This leaves a lot of stress on the families, especially in the current economy. Sacrifices are truly made all around.

The foundation spreads its funds around each year helping out various military organizations here in New England– from homeless shelters to groups that send care packages overseas to our currently deployed troops. This year’s event will be on March 20th and tickets are available for a donation of $75 each. Booklets are also printed in which businesses can advertise. The main organization that will benefit from this year’s event will be The Fisher House in Boston Massachusetts. Some of the funds will support “Local Heroes of Wilmington,” “Pack It Up” of Boston, and “Helping Our Troops” of Stoneham. All donations of any size are always welcome. For tickets to the events or if you wish to advertise you can contact Bob at 1-617-212-1508 or you can visit the website at www.ahernfoundation.org.Bobs motto is simple and to the point,” Fighting for those who fight for us.”