By Tom Duggan on February 8, 2005Comments Off on Valley Patriot of the Month! Sylvio “Sy” Uliano – Heroes in Our Midst 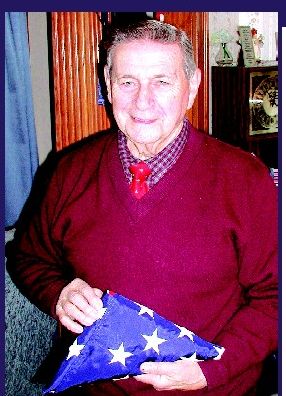 Cpl. Uliano can still hear General George C. Patton telling the troops not to worry about going into combat. Patton told them, “First, the enemy fires and you duck. Then, you fire and the enemy ducks.”

This quote seemed humorous when Sy Uliano relayed the story, but I’m sure it was less humorous at the time. Other Patton quotes, while pretty much right on the mark, were more chilling. For example, Patton also told them, “The reason we’re here is to kill German soldiers. The sooner we kill them all, the sooner we can go home.” And, go home is just what Cpl. Uliano and his fellow soldiers wanted to do. To do that, Sy and the 3rd Army followed Patton’s strategy, “Attack! Attack! Attack!”

Sy Uliano’s military career started out quite modestly before the war. He signed up for the National Guard in 1940 so he could earn $1 for each Sunday drill session. You had to be 18 to join the Guard, but 17-year-old Uliano wasn’t fazed; he just lowered his birth year by one on the signup form.

With war clouds looming, Sy was called up for one year of training as a forward artillery observer and was now assigned to the Yankee Division (102nd Artillery Battalion, 104th Combat Team).

Sy arrived in France shortly after the D-Day invasion and was quickly put to work helping supply Patton’s 3rd Army, which was doing its best to outrun its supply lines. Initially, Sy drove trucks as part of the “Red Ball Express” but his career as a truck driver was short lived. The Army had a more exciting assignment in mind. It was time to join Patton’s 3rd Army as a Forward Artillery Observer … the job Sy was originally trained for. 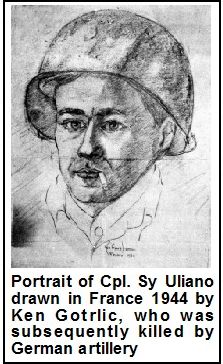 Sy remembers the day he first saw General Patton … it was the day Patton spoke the words previously quoted. These words struck home. While Artillery units were typically located several miles behind the front lines, as a forward observer, Sy would only be 25-50 yards from the infantry engaged in eyeball-to-eyeball combat. Recalling his first day of combat, Sy chuckled as he relayed his initial exposure to incoming mortar rounds. When Sy first heard the shells and the accompanying explosions, he dove into a nearby foxhole … right on top of a high-ranking American officer! After dressing down the new arrival, the officer told Sy, “What are you doing? Those are our shells!”

After daily exposure to mortar and artillery barrages, Sy soon was able to tell friendly shells from German artillery. But even experienced soldiers aren’t immune from feeling fear. Sy told of the many times he tried to crawl into his helmet when under fire. Going home was a thought that he must have often savored.

Shortly after Sy’s unit joined the 3rd Army, all hell broke loose. In late December 1944, the Germans launched one of the largest attacks of the war. The two-month-long Battle of the Bulge was under way.

When the attack began, the Germans took 68 very surprised American troops captive. The Germans promptly marched them into a clearing at Malmédy and machine-gunned them (this event was prominently depicted in the movie “Battle of the Bulge”, which Sy noted was generally a pretty accurate portrayal of the battle). 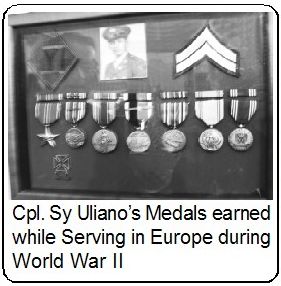 Sy had the unpleasant experience of being in the unit that first discovered the murdered American prisoners. The bodies were immediately inspected to see if any soldiers were still alive. Sy was surprised to discover one of the two American soldiers who miraculously survived the ordeal.

While German prisoners were generally treated well by American soldiers, Sy related that, after particularly gruesome displays of German cruelty were uncovered (such as at Malmédy), it was not uncommon for angry American infantry to dispatch German captives. The practice never lasted long because higher-ups desperately wanted enemy soldiers brought in alive to secure much-needed intelligence.

Patton, of course, was known for his aggressive military campaigns. Sy recalled that if Patton saw a unit stalled by the side of a road, he would tell them they had three minutes to get moving or they would be busted in rank.

Once, when Sy’s unit was waiting to cross a bridge over the Rhine that was under attack by the German Luftwaffe, his Captain told Patton they were waiting until nightfall or until the attack ceased. Patton responded, “This is what I think of the Germans.” He walked over to the bridge and, fully exposed (in more ways than one), urinated in the river. He then ordered them to cross without delay. 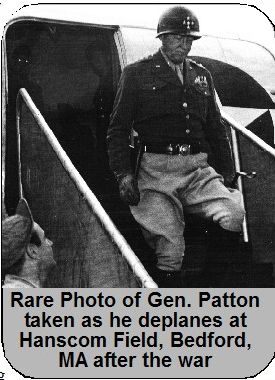 By the time it was Sy’s turn to cross the bridge it was dark, but the German attack continued. When Sy was half way across the bridge, the convoy stalled. Sy prepared to jump in the river if an attack came, but was told he would never be rescued in the dark. Luckily, the traffic jam broke and he made it across safely.

Once, when entering an enemy-occupied town, the word came that Sy and his unit were surrounded and they were ordered to turn around and fight their way out. Gunners were told to fire at anything that moved in any of the buildings. Sy stopped in the middle of this story to note that he prayed to the Lord five or six times every day that he would survive. Pointing skyward, Sy said, “Someone up there was listening.”

Seven months of combat were concluded with the surrender of Germany in 1945. By the time the war in Europe was over, Sy had toured France, Belgium (including a stop in Bastogne), Luxembourg, Germany, Austria, and Czechoslovakia. He earned numerous medals including the Bronze Star, the American Defense Service Medal and the European African Middle Eastern Theatre Campaign Ribbon. Sy remained in Europe for two months following the war to help with post-war reconstruction and finally returned to the U.S. in August of 1945.

Sy lives in Methuen with his WWII sweetheart, Dora, whom he married in 1947. Sy remains active as a youth baseball coach in Lawrence, a passion he has pursued for 36 years. Near his home in Methuen is the Sy Uliano baseball field that was dedicated to him in 1994.

Sy, thank you for your service in defense of our country and for your continuing contributions to the Merrimack Valley.

Bronze Star Dates: 8 Nov. through 12 Dec. 1944 Place: East of Nancy, France Partial Citation: “During the offensive operations against the enemy … Corporal Uliano, Artillery Liaison Noncommissioned Officer, performed his duties in an outstanding manner, despite adverse climactic conditions and difficult terrain often times under enemy fire… His performance contributed materially to the successful execution by his Battalion of its fire missions. His courage, initiative, and unusual devotion to duty reflect the highest credit upon Corporal Uliano and the armed forces of the United States.” – Award of Bronze Star, HQTS 26th Infantry Division, February 1945.

Valley Patriot of the Month! Sylvio “Sy” Uliano – Heroes in Our Midst added by Tom Duggan on February 8, 2005
View all posts by Tom Duggan →