By ValleyPatriot on March 25, 2018Comments Off on Valley Patriot Readers Give $3,300 Scholarship to Lawrence High JrROTC Student Darlene Santos

Lawrence High School Senior Darlene Santos joined her fellow students in the JrROTC and marched into the Valley Patriot’s 14th Anniversary BASH last week as the JrROTC has done every year at the beginning of the scholarship portion of the event.

But this year Valley Patriot Publisher Tom Duggan had a surprise for Santos after the JrROTC stood in formation at the front of the stage.

Duggan walked in front of the formation and asked, “which one of you is Darlene Santos?

“Can someone please relieve her of colors?” Duggan asked as he pulled Darlene out of formation and brought her to the front. 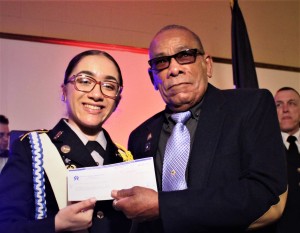 “Every year we give a scholarship to a couple of Lawrence High School kids and this year a gentleman named Eugene Smith came to me, he’s an Army veteran and runs a non-profit called Military Connections he also sits on the board with me at the Lawrence Lions Club. He said to me a few weeks ago that he came to the bash last year, I think it’s amazing what you do for the kids, so I wanted to give you $1,000 this year for an JrROTC kid. As soon as I posted on line a ‘thank you’to Eugene a whole bunch of people chimed in and said they wanted to contribute to this scholarship as well,” Duggan said.

Tonight Darlene there are a lot of people here whom you have never met who are rooting very hard for your success as you move forward to your college career and they are all here todnight to cheer you on. But, the reason you are getting this award is because our friend, US Army veteran Eugene Smith started us off with $1,000 from his non profit MILITARY CONNECTIONS and asked that it go specifically  to an ROTC student at Lawrence High School so thank you Darlene for all you do and thank you Eugene for making this all possible.

Eugene Smith then presented Santos with his check and each of the donors listed below also gave their checks to Darlene Santos for her college education.

After the event more contributions were made to Darlene Santos’ ROTC Scholarship bringing a new total to date of: $3,300.00