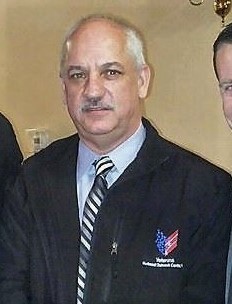 Ratka was a member of The Valley Patriot family and received the 2016, Valley Patriot Hero Veteran Award for all the work he has done to help homeless veterans, and provide services for veterans in need.

Ratka was a staple at the Valley Patriot’s annual charity BASH! and was always there to help us honor veterans who have been overlooked.

John Ratka had a distinguished 26-year career in the United States Navy.

He enlisted in the Navy in 1972. He completed 21 submarine deployments, numerous surface ship deployments, and attained the rank of Command Master Chief.

John was appointed to the position of Executive Director of the Veterans Northeast Outreach Center (VNOC) in Haverhill, in October 2002. Under his leadership, they established great partnerships with the Veterans Administration, Bedford, the VA, the MA Department of Veterans’ Services, Housing and Community Development, the Department of Housing and Urban Development, Veterans’ Services Officers and many local community agencies.”