By Tom Duggan on August 21, 2013Comments Off on Valley Patriots Clinch First Place Head to the Playoffs in Over 30’s Girls Softball! 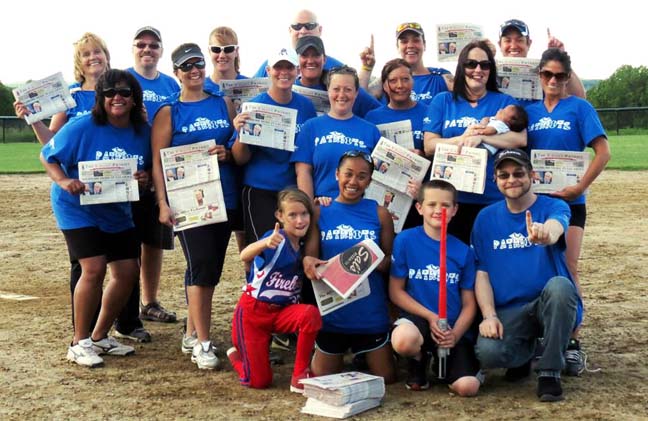 In their second year in a row as a team The Valley Patriots have once again clinched the 1st place spot and head to the playoffs in the True Vision, Over 30 – Girls Softball League. Last year The Valley Patriots not only captured first place in the league but won the 2012 World Series Championship in their first season as a team.

The Rebels placed 2nd in the league at 10 and 3, with the Devils and All Americans tying for third place in the league with 9 wins and 4 losses each.

“I”m very proud of my girls,” said Tom Duggan publisher of the Valley Patriot newspaper and sponsor of the team.

“Last year was our first year as a team and I know nothing about sports so, it was quite a thrill to not only come in first place but win every round of the playoffs as well as the World Series Championship game. Now, we are headed to the playoffs again our second year in a row and with the addition of our star rookies Beth Pickles and Joselyn Bengtson, I think we are ready to repeat our World Series win of 2012. What a thrill for the girls, they all work hard, they all play hard and they take this almost as seriously as I do.”

Duggan  named shortstop Courtney Gagnon as the 2013 season MVP for her consistency in the field and at the plate.

“We have an entire team of star athletes, who know how to give a team effort. It’s never about any individual on the field it’s how they play together just like our work ethic at the newspaper and I think that is why we are so successful on their field. I just love watching them play together and I am really proud of my girls!”

Game one of the playoffs will be Friday, August 23rd at 5:45pm at Page field in West Newbury.

Valley Patriots Clinch First Place Head to the Playoffs in Over 30’s Girls Softball! added by Tom Duggan on August 21, 2013
View all posts by Tom Duggan →