By Tom Duggan on June 7, 2005Comments Off on Valley Patriots of the Month Charles & Edward Boddy

They were literally the lifeblood of the American troops fighting against the Nazis and Japanese during World War II. The mariners of the Merchant Marine may have been civilians, but their task of supplying food, arms, medicine, and supplies was critical to the war effort.

Often facing Japanese subs or German U-boats, these brave men gave life to the battlefield for American soldiers and kept them one step ahead of the enemy. When they finally returned home, however, their status as civilians prevented them from receiving many of the benefits that the government rightfully gave to our military veterans.

Charles and Edward Boddy were young and energetic when World War II broke out. They were also patriots. Growing up in Lawrence, they were part of a group of friends called “ Tally Ho,” because they hung out at a lounge called The Tally Ho. All their friends were between 21 and 30 years old. Before the war they went to the beach, played hockey at Hills Pond and visited Hofreau’s to see the latest bands play. 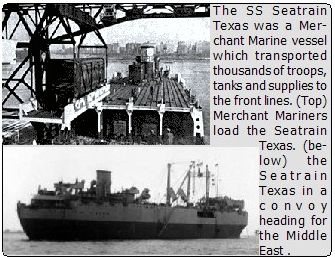 But on Sunday, December 7, 1941, their lives would change forever. That was the day when the Japanese launched a sneak attack on Pearl Harbor, and the “Tally Ho” friends were deeply moved by this treacherous act and all the terrible events going on in the world. They talked about what Pearl Harbor meant to them and felt they had to contribute to the national defense. By the end of December 1941, Charles Boddy and 25 young men from their group joined the war effort.

Charles Boddy says he saw an ad in the local paper which said “Maritime needs sailors, $75.00/month.” On December 27, 1941, he signed up to join the Merchant Marine. He said he wanted to wait until after Christmas so that he could spend what might be the last Christmas holiday with his family.

A week later, on January 3, 1942, Charles was off to Hoffman Island in New York Harbor for three months of basic training. Then, on April 13, 1942, he was assigned to serve on a United States Navy Transport named the USS Siboney. On its first trip, the ship carried 2,200 GI’s to Belfast, Ireland where troops and supplies were desperately needed. The mariners then sailed to Scotland, transferring more supplies before returning home to New York. 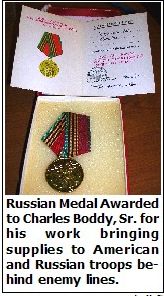 Charles completed nine other trips during the war, watching fellow mariners lose their lives trying to keep troops stocked with food, ammunition and supplies. For six months, in the harsh and inhuman winter conditions along the Arctic Circle, he carried troops to Labrador, Greenland and Finland. He participated in convoys bringing shells and explosives to our Russian allies at Odessa so that the eastern front could be defended against Hitler’s invading forces. At that time, supplies could not be funneled through Nazi controlled Western Europe and the transports had to travel behind enemy lines and risk submarine attack to supply Russian forces.

He made two trips aboard the SS Seatrain Texas to North Africa where he delivered locomotives, railroad cars and over 180 tanks to our Allies fighting the forces of Rommel, better known as “The Desert Fox.” Historians attribute the delivery of these Sherman tanks as a decisive factor in the Allied victory at El Alamein.

Charles said his most memorable and dangerous trip was carrying 4,200 tons of one-hundred pound bombs to our allies in England. The bombs eventually made their way to Germany via air force bombing missions over Berlin. “The ship had six hatches and every one of them was filled with bombs. It was very dangerous,” Charles said. “We were on a ship filled with bombs! One mistake, one problem and we all would have blown into the sky”!

Charles recalled another harrowing situation: “For about eight weeks we were exposed to the enemy’s buzz bombs when our ship, the USS James Gunn, was involved in a collision in Belgium. We were forced to discharge the cargo and repair the ship right there. “

By 1943, Charles had accumulated enough sea time to attend officer’s training school at Fort Trumbel in New London, Connecticut. He graduated in November and shortly thereafter signed on to the USS Alabama out of Boston. Charles sailed until December of 1944 when he went to Maritime School in Boston for his Second Officer’s License. His last trip with the Merchant Marine was on July 28, 1945. “One of my proudest and most patriotic feelings was looking over a convoy of 100 ships and thinking of the contributions we were making towards winning the war,” he stated.

In September of 1942, at the age of 20, Charles’ younger brother Edward “Ward” Boddy also enlisted in the Merchant Marine. Prior to joining up, he had worked as a welder in the Bath Shipyard and then built invasion barges at the Boston Navy Ship Yard.

Ward was subsequently sent to Sheepshead Bay in New York for his basic training. He never could have dreamed of the dangers he would face on the open seas. He trained for three months before going to work for the Standard Oil Company on a gasoline barge. The barge was towed by a tugboat and supplied oil, gasoline and other fuels to U.S. ships. “The fuel we were carrying was highly flammable… there was no smoking at all on the ship … one spark and we would all be dead,” he said.

While overseas, Ward’s father had a heart attack and stroke, which allowed Ward to return home where he was able to sign on to a barge with Standard Oil in Boston so he could care for the family.

When things settled down, Ward left for New York where he worked for Alcoa Aluminum, hauling food, flour, mail and cars to Trinidad – still dangerous waters for the Merchant Marine.

His next adventure was an invasion run aboard a U.S. Army transport bringing troops to Liverpool. There, they picked up more troops and brought them to Normandy for the now famous “D-Day” invasion. On the way, the Merchant Marine lost one of their ships, the Susan B. Anthony, when she hit a floating mine and sunk. Fortunately, the troops and crew were rescued with no loss of life.

Ward was also stationed in Belfast Harbor for a month, but says his most memorable moment was aboard the SS Lewis Luckenbach. “I loved to play the piano and I was pretty good at it,” he now says, humbly. “The Luckenbach had been converted into a hospital ship [the Louis A. Milne] and transported wounded soldiers back to the states from different battlefields. On the day the hospital ship was christened, Kate Smith came to sing ‘God Bless America.’ It was such a thrill because it was one of the first times she had ever sung it for the troops,” he said.

Ward’s piano playing onboard the Lutinback was a great morale booster for the wounded soldiers, proving that whether delivering supplies, fighting on the battlefield or providing comfort to wounded soldiers, every contribution made by Americans during the war effort played an important part of the ultimate victory over the Japanese and Nazis.

For his service in the Merchant Marine, Charles Boddy received several medals, including the Russian Medal for transporting munitions and supplies across the Arctic Circle and behind enemy lines to Russian ports. His brother Ward received three North Atlantic Combat medals and several citations.

After the war ended, Ward joined another brother, Raymond, in the furniture business at Boddy Furniture in downtown Methuen. Raymond had also subsequently joined the Merchant Marine. A fourth brother, Leonard, served in the army. “Leonard went in as an enlisted man and came out as a captain,” Charles said.

Charles’ daughter, Ann Haggerty (a former Valley Patriot of the month), is presently in the army reserves and served in Operation Iraqi Freedom. She is an assistant principal in the Lawrence public schools. Charles’ son, Charles Boddy, Jr., is the City Solicitor for Lawrence.

Charles (Sr.) and Ward Boddy are now actively trying to get a bill passed in Congress, H.R. 23. While other World War II veterans received the GI Bill, home loans, health care benefits and other rewards for their wartime service, the heroes of the Merchant Marine were denied these benefits. H.R. 23 is called “The Belated Thank You to the Merchant Mariners of World War II Act of 2005”.

It provides $1,000 per month to WWII mariners or their widows in lieu of benefits not received after World War II. Charles and Ward hope that our government will recognize the contribution of fellow mariners with the passage of this bill.

The Valley Patriot wants to honor and thank all the Boddy brothers for their patriotism and service to our country at one of the most dangerous times in our nation’s history. We also urge our readers to contact their congressman and urge support of H.R. 23. For additional information, visit the Merchant Marine web site at www.usmm.org.