By ValleyPatriot on August 25, 2014Comments Off on Valley Patriot’s of the Month ~ Heroes in Our Midst: The Moran Brothers 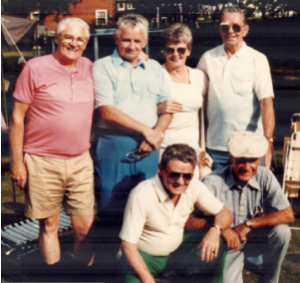 Webster’s dictionary defines a patriot as one who loves his or her country and supports its authority and interests. The Moran family was such a family; one of the many families, over the years, that has shown its support for its country. Born and raised on Willow St. in Lawrence, Massachusetts, the Moran boys learned very early what it meant to serve your community.

Their father, John A. Moran, was a firefighter for Lawrence for over 41 years and retired as a lieutenant. The family was made up of 5 boys: John, Freddy, Joe, Howie, and Moe, and one girl named Grace. All five of the boys served their country in the armed services. At one point, in 1944, four of the five boys were serving at the same time. John was the eldest. His brothers always referred to him as the luckiest of them. John was drafted in 1944 and only served until the birth of his third child, about 6 months later. During his short stint in the Navy, he served on the aircraft carrier, the USS Lexington as a second-class seaman. Returning home to his wife and three children, he went to work at Davis and Furber of North Andover.

The next three brothers were the middle brothers and together saw the most action in the war. Joe was the first one to enter the war. He entered in 1942, at only 17 years of age. He was assigned to the U.S.S. Elmore as a 3rd class radio man. The Elmore was an attack transport which transported close to 1500 troops at a time. He later also served on the U.S.S. Turner and U.S.S. Fisk, both of which were destroyers. Joe served in many places during the war, among them the Marshall Islands, Guam, the Philippines and Okinawa. Joe served until 1945 and was honorably discharged, returning back to work at the Arlington Mills. 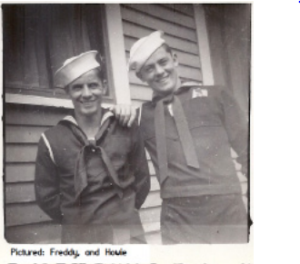 Joe was joined by his brother, Freddy, in 1943. Freddy was the only of the four brothers who fought in the Air Corps during WWII, rather than the Navy like his brothers. Freddy was a corporal in the US Army Air Corps. Freddy spent most of his 3 years in Guam and the pacific theater as a radioman, with the 10th air force dealing mostly with P38’s. He was honorably discharged in 1945. In 1950, as the Korean War started, Joe was called back into the service and gave 3 more years to his country and was again honorably discharged in 1953. Joe was also the recipient of the Bronze Star, and several battle stars.

In 1944, Howie joined the others in service to his country. Howie left boot camp and headed out to Treasure Island, located in San Francisco, California. As fate would have it, this was at the very same time that his brother, John, was being discharged and was on his way home. John also happened to be passing through San Francisco. Neither of the two brothers knew that the other one was going to be there. It was just by luck that they both happened to be out one night and bumped into each other. It came as a shock to both of them that they were clear across the country and happened to see each other.

Howie continued on to serve most of his time in Okinawa, Japan. He was a 3rd class store keeper and was in charge of about 33 men. He also served on the U.S.S. Ajax, a small repair ship that held close to 200 men. In 1948, Howie was hospitalized at the San Diego Naval Hospital and was discharged from there soon after. After coming home he went back to work with his brother, Joe, at the Arlington Mills and eventually went to work with the Lawrence Rubber Company, and then for the city of Lawrence in the Parks Department for 33 years.

The 5th and youngest brother, Moe, served in the US Army from 1958-1962. He was a private 1st class and spent most of his time serving in Germany. He was involved with a lot of rebuilding to the country after the devastation that followed WWII. He was the only brother not to be serving during a time of war and was discharged right before Vietnam really got off the ground. Moe, however, continued to serve his community when he left the military; he followed in his father’s footsteps and became a firefighter in Lawrence.

A patriot is someone who loves and supports his or her country. Most of us, when we think of it at all, do think of ourselves as patriots but that feeling, for many of us, is never put to the test. To profess love for one’s county is easy; to prove it, as the Moran brothers did, is a terrifying and life-threatening proposition. Many of us take an interest in the goings on in our community and country. Some of us go so far as to get involved in politics or community groups of some sort. But how many of us have the courage to express our feelings for our country as the Moran brothers did? How many make that ultimate commitment of risking their lives for it? In the years that so many young people are free to go off to college, enjoy the birth of adulthood, friends, family and freedom, the Moran brothers lived without any of that in order to ensure that we, and millions like us, would be free to enjoy our lives as we have. How sad and cruel that, for so many of us who have enjoyed the fruits of their sacrifice, we have done so without a thought for the men who risked, and even gave their lives that we might know such pleasure.

It was an early Monday morning and Joe and Howie, the last living Moran brothers, were sitting in the kitchen of Joe’s house. Over coffee, they told tales of their time in the service, some they shared willingly and others more reluctantly with a request that they not be shared. They talked about engaging in battle on the shores of Okinawa, and the pain of watching fellow soldiers lose their lives in that same battle, of watching a kamikaze headed straight for another American ship and feeling helpless as they watched and prayed for the brave souls aboard the ship. Most of us will never fully understand the horror of such scenes.

Talking to the last two living Moran brothers, Joe and Howie, what is most striking is their humility. They were both reluctant to speak much about their experiences. They expected no gratitude or recognition for all they had gone through. They spoke, instead, of the men, some they had known and many, many that they had not, who had made the last and greatest sacrifice in those times, never coming back to live normal, quiet lives as the Moran brothers had. Rather than accepting any acknowledgement, they insisted that much of the time, it was simply about being at the right place at the right time. For the Morans, it had been a simple equation; their country needed them and they had answered the call. There was never any question of doing otherwise. Rather than seeking any honor for this, they feel that they have already been honored simply by being able to have shown the measure of their devotion to the country they love.

It is exactly this that makes these men real patriots. Between the five of them, the Morans have seen more of war than most families. Yet they did so quietly and without a second thought. And, rather than seeing anything special in what they did, they insist instead, on giving others credit for their brave and, in many cases, heroic actions. The Moran brothers are true patriots. John, Freddy, Joe, Howie, and Moe were willing to give their youth and risk their safety to serve their country honorably and, in the end, they were fortunate enough to have made it home. They consider themselves the lucky ones. Those who know them consider them true patriots.