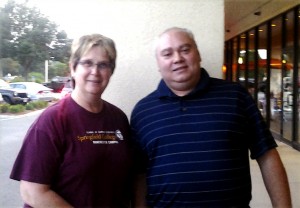 Jay Landry is an adult student at Springfield College who is taking human service courses at the school.

Born and raised in Amesbury, the Methuen resident had no idea when he enrolled in Springfield College to get his bachelors of science degree in human services, that he would be helping to set up a program that would help veterans right here in the Merrimack Valley.

“The first course we had to take was Issues in Research, which is the ground work course before you get into what is called ‘project’,” Landry says. The purpose is for us to create a grassroots community project that will help to make a difference in people’s lives.”

Landry said that a young combat vet from Iraq was in his class and that he wanted to start a veteran project to help other veterans.

Landry is a veteran himself serving in the Air Force stationed in Minot, North Dakota from 1985 – 1989.

I went over to the other veteran and said “I want to be on your team,” Landry explains.

“That’s when I realized the perfect project for the community was a veterans project.”

“We had 6 students interested in the veteran project in which our professor, Cheri Sullivan, advised us we could only have five at the very most.” Landry had always envisioned having a discussion group of some kind with the veterans. The much larger veteran group ended up splitting and Kyle Cunha (the young combat vet) and 2 others formed their own educational group for veterans. Landry says that the discussion in the group kept coming back to forming a peer to peer discussion group amongst returning veterans. Landry and his team of Deb Handschumaker and Tara McKenzie formed The Springfield College Veteran Peer to Peer Community Project Group.

“Almost from the get go the team and I really wanted to frame it on the AA model, with buddy-peer discussion among vets themselves to talk to each other and pool veteran resources so they can help each other. But this wasn’t just a group of students having a discussion, we did a lot of research.”

“We saw in our studies that the VA was really backed up in case loads. They aren’t treating vets in a timely manner, and the vets aren’t getting the support they really need. The more we went into the community to talk to the different veteran groups and organizations, the more it helped us realize we could establish and sustain a veteran support group in the community.”

Landry says that on April 18, 2013 he was at a training facility for an addiction training program when he heard a female behind him talking about vets and addiction. “On my break I went over to talk to her and it turned out she was a peer facilitator for a veterans group called New Hampshire Vet to Vet.

“Within a week, Deb Handschumaker and I, one of our project members on the team, were at a Vet to Vet meeting at the Friendship Center in Derry, NH. They gave us pamphlets and facilitator’s manuals and welcomed us. They said why don’t you find MA resources and try to find support for vets in your community and start your own Vet to Vet group. They told us there are 38 chapters in this country for Vet to Vet. So, our first stakeholder was NH Vet to Vet thanks to Jessica Price, and we really couldn’t have done this without her.” Shortly after working with Jessica, Landry goes on to mention that he called JT Torres on a tip given by Islean Carrillo (a classmate in Project and niece of JT). “This “tip” Landry says, ended up being a very important one because I ended up speaking with JT, who is the President of the New England Veterans Liberty House (NEVLH) which is a Lawrence 501 © (3) organization who now host the meetings every Tuesday Night from 6:30pm – 7:30pm at 599 Canal Street in Lawrence, MA.” Landry says he and his classmates have reached out to the Lowell VA, the Bedford VA and every veterans group they can find to make sure they understand the needs of local veterans and make the contacts so they can fill in providing those needs at the local level.

Landry and his classmates have gained support from local veteran service groups, Northern Essex Community College, University of Massachusetts at Lowell, The North East Outreach Center in Haverhill, Starbucks (provides free coffee at meetings), The Valley Patriot Newspaper and local businessman, Geroge Saragas, from Heavenly Donuts who is an official sponsor and stakeholder for the local Vet to Vet project.

“Heavenly donuts will be providing much needed support and sponsorship to help advertise and raise awareness in the community so that veterans know we exist and can come to our meetings for whatever help they need,” Landry said. There are so many people I would love to thank but you can’t thank everyone, George, however is one man in this community who really cares about our veterans and I want to make sure I thank him publicly because we need more people like George and more businesses.”

Vet to Vet Services Comes Alive in Lawrence as Part of College Project added by Tom Duggan on September 19, 2013
View all posts by Tom Duggan →