By Tom Duggan on May 7, 2022Comments Off on Veteran Jason Gilbert of Clear Path Receives the John Ratka Hero Veteran Award 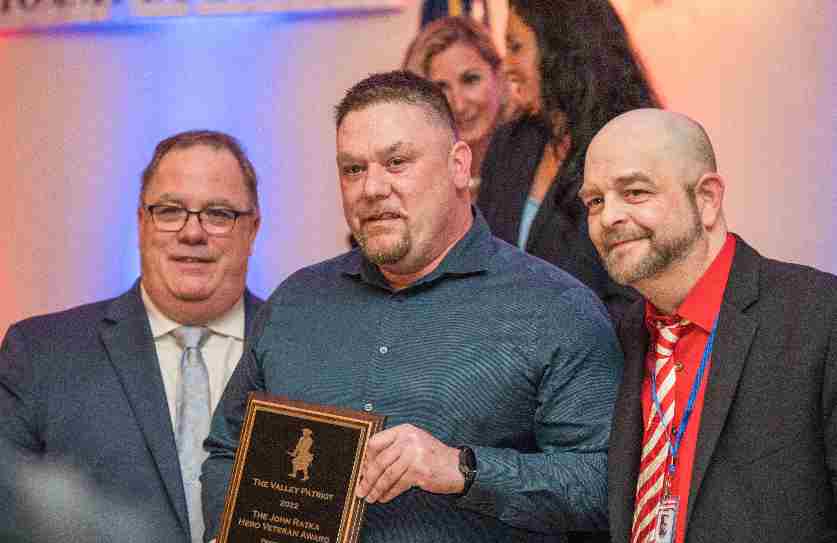 Because honoring veterans is so much a part of what we do at The Valley Patriot, each year we honor people who themselves honor our hero service men and women here at home. With the passing of our good friend and hero veteran John Ratka in 2019 this award was immediately named in his honor as the founder of Veterans Northeast Outreach in Haverhill.

This award is given to veterans who service other veterans as we see that as the highest level of community service.

As an honor to his best friend John Ratka, former award winner Randy Carter of Methuen took the microphone to surprise his friend Jason Gilbert, who worked with Ratka and was very close to him.
Carter talked about Gilbert’s military service and the countless homeless veterans he has helped get off the streets while dozens of fellow veterans looked on and called out Jason’s name.

“Having an award with John’s name on it is… I just don’t know what to say,” Gilbert said choking up.

“I am so grateful for this, thank you to Randy and everyone here.
As an award winner Jason will get to nominate someone to receive this award next year at the Valley Patriot’s 19th Anniversary BASH. Date TBD. ◊