By Tom Duggan on October 2, 2017Comments Off on Veterans Assisting Veterans Hold Rally In Lowell ~ VALLEY PATRIOTS OF THE MONTH

The event was held to raise money for the VAV, a local veteran group that donates 100% of the money they raise to veterans in the Merrimack Valley
“It’s a disgrace that we even need to do this for the men and women who serve our nation,” MacDonald said.

“These brave men and women put on a uniform to defend our country and they should never be homeless, should never worry where their next meal is coming from, and should never be in need of basic services. Sadly, they are. So, Veterans Assisting Veterans and the people who support our efforts are here to try and fill that gap.”

MacDonald told The Valley Patriot that 100% of the money raised from the rally goes to support the programs at Ironstone Farm.

“Ironstone Farm has a great program for veterans who are also first responders, so they can get help with PTSD (Post Traumatic Stress Disorder) issues. We are currently in the middle of a campaign to build a new building at Ironstone to allow first responders to bring their families for a weekend to work with horses and address some of their personal issues.”

“We have veterans who are behind on their mortgage and at risk of losing their homes and the government is doing nothing to help them. This is how we end up with homeless veterans. So, part of what we do at Veterans Assisting Veterans is to identify veterans in that position and help them get current on their payments so they don’t end up in the streets.” 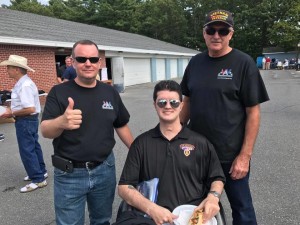 “VAV made a significant donation to wounded veteran Vincent Brodeur, the most severely and traumatically brain injured veteran in the country.He needed additional funding for rehab that wasn’t covered by his insurance so, we made a donation to help ease his financial burden. But, let me repeat what a disgrace it is that our politicians ignore the needs of our veterans and that we even have to do this. We are happy to do it, but what does it say about our government leaders that we do?”

Most of the speakers at the rally took United States Senator Elizabeth Warren to task for “ignoring the needs of Veterans”.

“I’m sick and tired of these elected officials that get into office who sell you a bill of goods when it comes to veterans services, and in the same breath turn around and shoot you in the back.”

Torres also recounted how his State Rep. in Lawrence, Juana Mattias, failed to deliver $25,000 to his organization calling it “a disgrace to our country and a disservice to our veterans.”

“I’m fed up. I think it’s time for all our veterans across the state to stand up. There are 340,000 plus veterans in the State of Massachusetts. If we were ever to unite – oh my God – we would be a powerful force to be reckoned with. I run a small veteran organization and most of our veterans are senior veterans. 80% of our senior veterans go to our facility just for food. We provide 1,600 bags of food per month for senior veterans. It’s heartbreaking to see this every single day; veterans who are hungry. But, at election time these politicians promise us the world and never deliver.”

“If you are a veteran and you call up Senator Elizabeth Warren’s office or you email her, she’s going to send you a form reply, and the form reply is basically, ‘if the phone don’t ring you’ll know it’s me!’”

“This is a serious matter here, and it’s great to come to help out the veterans. I think they are trying to get everything under control at the Veterans Administration. It’s been a disgrace the way it’s been run for all these many years. It’s going to take a long time. Talk about a swamp. It’s a swamp deeper than the Mariana Trench.”

Boston comedian Joe Ligotti – The Guy from Boston – who is a frequent guest on ‘Your World with Neil Cavuto’ on FoxNews attacked Senator Warren and told the crowd of over 300 people that there is no shame or bigotry in loving our country or our flag.

“I love this country,” he said to a round of cheers. “I love this country, and I love that flag. I love all our veterans. I think America comes first. I am honored to stand behind that flag, and I say we don’t stop searching for those folks – wherever they fought – until every single one of them is accounted for.”

“I get called a bigot … but, It’s OK to love where you’re from. It’s OK to have pride. That’s called patriotism not bigotry,” Ligotti said to a standing ovation. “That’s what the fake news want us to think, that patriotism is bigotry. They want to divide us. Because divided they can turn this country upside down and inside out.”

Ligotti singled out Purple Heart and Bronze Star recipient, Vincent Brodour.
“We owe you everything, and I apologize for the way the government takes care of you. We’re going to fix that. We have to take this country back.” 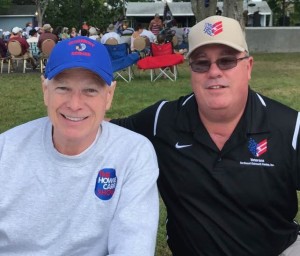 U.S. Senate candidate Geoff Diehl said he had relatives who served in Vietnam and thanked all the Vietnam vets for their service. “We have some great veterans and sometimes they need help, and some of our officials are not doing all they can to help.”

“Earlier this year, I read a newspaper article about VAV, and I was shocked to read that our U.S. Senator was ignoring their needs. So, I called. At the end of the line was John MacDonald, and all I asked was ‘how can I help’? To me, helping our veterans should be job #1 for a United States Senator. Job #1 should not be hoping the president fails and continuing with the gridlock our country is in.

Diehl said that the priority shouldn’t be funding and programs for illegal aliens, but requiring social security numbers for public housing so that veterans are given priority over citizens of other countries.

John MacDonald said he wanted to thank Dennis Moschella, Joe Michado, Kevin Richardson, Mike Miles, Phil Maloney, Eric LaMarsh, Bob Hornbaker, and the folks at the Owl Diner who helped organize and sponsored the event.
He added that homeless veterans and rental or mortgage assistance were the biggest needs they get requests for at the VAV. “Sometimes we are literally stopping people from being thrown out into the streets. So, yeah, sometimes I get angry when I hear veterans are not getting priorities in housing in Massachusetts. There’s a gap in the state and it’s unacceptable.

We can never raise enough money to help all the vets who need it. But, together we are stronger and we need to start thinking about working on both or we suffer. That’s why we are where we are today. We have to start working together.”