By John MacDonald on December 26, 2014Comments Off on Vibrations from Ferguson 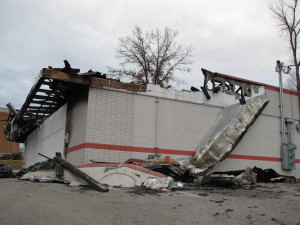 On November 13, 2014, Congresswoman Tsongas led a hearing on police militarization following protests in Ferguson, Missouri in the House of Representatives.

During that hearing she was quoted by the Lowell Sun as saying, “When you saw peaceful protesters being confronted with armored vehicles, having assault weapons pointed at them, that did raise a lot of questions around militarization of local police departments,” Tsongas told The Sun after the hearing. “When you see an MRAP (mine-resistant ambush-protected vehicle) on the street of a small community, you have to ask the question if this is appropriate,” she added.

Winston Churchill was quoted once as saying, “You have enemies? Good. It means you’ve stood up for something, sometime in your life.” Upfront I have no intention of creating an enemy, but I do know that my position on supporting law enforcement, conflicts greatly with Congresswoman Tsongas’s point of view. Also in fair disclosure, several years ago I publically commended her for her passion and support of active duty military and our veterans. Unfortunately, and how quickly… things can change.

As better stated, “What have you done for us lately?” I mean, other than blindly support President Obama and his extreme left wing agenda and forget about those who serve and protect all of us?

Providing our law enforcement with access to life saving body armor, vehicles and weapons as well as computers and technical equipment is essential in helping law enforcement protect its citizens and themselves. The current negative political attitude towards law enforcement by the Obama administration and the extreme left wing of the Democratic Party is disturbing to say the least. From beer summits to the automatic assumption of guilt for a police officer in Ferguson, The President, his administration and his supporters in Congress have subscribed to race based reactionary philosophies that support a blatant distrust for the men and woman in blue. It’s a philosophy that should be rejected and I wholeheartedly stand against.

Any political circle or politician that considers Al Sharpton as their advisor or as their standard-bearer has lost my support.

How many professions do you know of like law enforcement, where when they leave home, there’s a good chance they will not come back alive?

The life threatening circumstances law enforcement faces every minute of the day is inconceivable. Law enforcement is often called upon to protect our citizens from criminals that are often better equipped with illegal weapons and technology than the police asked to serve and protect us. Providing our first responders with weapons and military grade equipment should be supported, not rejected. With the threat of terrorism and ISIS here at home, which is due in part to US/Mexico open border policies, this should be reason alone to supply law enforcement with the tools necessary to combat these threats.

How quickly Congresswoman Tsongas forgets the courageous and heroic actions that took place in Watertown, Massachusetts after the Boston Marathon bombings. If it weren’t for the military grade equipment and the heroism of our men and woman in law enforcement, we wouldn’t have captured one of the worst terrorists in American history.

As a concerned citizen and military veteran, I want our law enforcement to have the capability and protection to do their difficult job. I want law enforcement there when called upon to protect our property and lives. I want them there to protect our children and communities, without hesitation and with the best resources possible.

Finally, I ask our Congresswoman if riots similar to the ones in Ferguson took place in the Merrimack Valley or if the Boston Marathon Bombing terrorists had roamed through the streets near her home, would she have thought it appropriate for our local police to have access to military grade equipment or an MRAP (mine-resistant-ambush-protected vehicle)? My gut tells me she would, and so would the rest of us.

It’s time for Congress to focus on the real priorities and reject a witch hunt by the Obama administration towards law enforcement. It’s time for law enforcement to realize who their friends are in Congress and who is not. It’s time for citizens to stand beside those who serve and protect us, without hesitation, every minute of every day, in every community across the country.