By Tom Duggan on December 24, 2018Comments Off on Violent Crime Plummets in Lawrence

THE CALM BEFORE THE STORM OR A NEW NORMAL IN LAWRENCE? 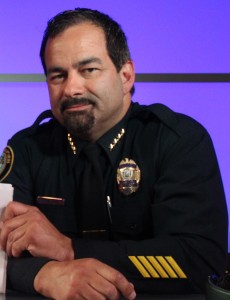 It isn’t a sexy story, so you probably won’t read about it in the local daily newspaper, but violent crime in Lawrence is plummeting and the results are quite noticeable.

Lawrence has a new Police Chief Roy Vasque who certainly can take credit for much of Lawrence’s declining crime rate. Others point to the fact that federal law enforcement has drained the swamp and arrested and deported major drug and gun traffickers headquartered in the city.

Chief Vasque credited his officers and a new approach to police visibility.
“We have a lot of new, young, aggressive officers that are doing a great job initiating enforcement and being visible as a deterrent to crime. More officers walking, and on bikes, has increased our visibility as well.”

“The new gang unit and our continued partnership with the state police and the Essex County Sheriff’s Department has kept the pressure up on the gangs.”
Vasque said on the Paying Attention Podcast in July that regardless of the actual crime numbers “our clearance numbers are really glaring. Sometimes we are triple the national average.”

Lawrence Mayor Dan Rivera told The Valley Patriot that he credits Chief Vasque and the new officers he hired.

“Lawrence won’t be safe until people in every neighborhood feel safe. That being said, the sheer number of police we have added, plus the police department’s leadership and community policing focus, led by Chief Vasque, have taken a significant cut out of the crime that occurs in the city.

The Valley Patriot has obtained the crime numbers for 2018 (as of mid-November), and compared to the previous years, the numbers are staggering.
Last year the City of Lawrence had 12 murders. As of the time we went to print (December 11th) there were only four murders in Lawrence for the year thus far.

“I think that the department is energized right now,” Vasque said on Paying Attention. “it’s up to me to make sure that that happens and I think if you have energized guys who want to go out to the job to get the results, I think that reflects in the numbers.”

“Certainly we reorganized the department, took a look at everybody, we put more bodies on the street going from 3 to 9 community police officers, as an example. We are trying to get guys to buy into a certain area and work that area and talk to the residents. We assigned one officer to be a liaison with the business community. They are spending the money here, they’re trying to open businesses and we want them to have a voice.”

“I think right now the guys are feeling really good about what’s going on, we are definitely moving forward with a lot of new technology, with cameras and we are looking to add a canine unit to help the city. Those canines are a huge tool and we miss them in Lawrence.”