Reward Offered for Information Leading to Arrest and Charging 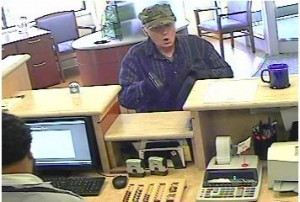 Boston, MASS – A task force of Massachusetts law enforcement agencies is seeking the public’s assistance to identify a bank robber who is alleged to have violently robbed a bank at gunpoint in Cambridge, Massachusetts on October 1, 2013. The robber is considered armed and dangerous.

On Tuesday, October 1, 2013, at approximately 9:05 am, the robber entered East Boston Savings Bank located at 2172 Massachusetts Avenue, Cambridge, MA. As he approached the tellers, he pointed a black pistol at the tellers and violently threatened to harm them if they did not comply with his demand for money. After receiving money from the tellers, the robber exited the bank and fled in an unknown direction.

The alleged robber is a thin, white male, approximately 50 years old, 5’7” to 5’10” in height, with gray hair. During the robbery, he wore a green military-style hat, dark-colored jacket, dark green cargo style pants, and white shoes. He carried a black bag or backpack. He placed the stolen money in a white bag that he removed from the black one.

The FBI is offering a monetary reward for information leading directly to the arrest and charging of the robber. Anyone with information regarding the robbery should call the FBI at (617) 742-5533 or the Cambridge Police Department at (617) 349-3300.

The robbery is being investigated by the FBI’s Violent Crimes Task Force which is composed of the Somerville Police, Malden Police, Saugus Police, Massachusetts State Police, Boston Police and FBI along with the Cambridge Police Department.