By ValleyPatriot on June 30, 2015Comments Off on VisionMax-Cinema 95 in Salisbury to show Christian Film: “Faith of our Fathers” 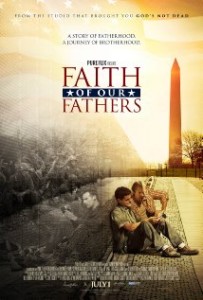 Next month The Valley Patriot will be publishing an interview with one of the writers of Faith of Our Fathers, Tom Saab of Salisbury. The movie will be shown at Visionmax on Rt. 110 in Salisbury, MA on July 1st-5th. Any group interested in purchasing 750 tickets can contact Tom Saab to bring a movie to your city.

On Wednesday, July 1st, VisionMax Cinema 95 on Rt 110 in Salisbury will be showing the Pure Flix Release of ‘Faith Of Our Fathers’ Commemorating 50th Anniversary of Vietnam War. The film stars Stephen Baldwin; Features Duck Dynasty’s Si Robertson and was partly written by Salisbury resident and Methuen businessman, Tom Saab.

Beginning July 1, stand up for faith, freedom and fatherhood as Pure Flix, the studio that created “God’s Not Dead”, presents Faith of Our Fathers. A story of fatherhood. A journey of brotherhood.

“Faith of Our Fathers honors all of those who served,” said Pure Flix Co-Founder and President Michael Scott. “Pure Flix is thrilled to partner with Downes Brothers and Samuel Goldwyn as we commemorate this important moment in our nation’s history.”

The film reunites Stephen Baldwin (THE USUAL SUSPECTS) with the Downes Brothers (Baldwin previously starred in the Downes’ film SIX: THE MARK UNLEASHED), and marks Candace Camer
on Bure’s (Full House) return to feature films. It also features Grammy and Dove Award-winning Christian singer, author and actress Rebecca St. James. For David A.R. White (GOD’S NOT DEAD, THE VISITATION), a founder of Pure Flix, “Faith of Our Fathers” is the latest collaboration with the Downes Brothers. And Si Robertson brings his signature humor to his role as well as his personal experience as a Vietnam vet and man of faith.

“Samuel Goldwyn Films is about unique voices bringing original stories to a wide audience,” said Meyer Gottlieb, president of Samuel Goldwyn. “In that spirit, FAITH OF OUR FATHERS is a fresh look at brotherhood forged in battle and love’s lasting power into future generations.”

Faith of Our Fathers is a moving story of faith and friendship in time of war, and for generations—premieres nationwide July 1 as the nation commemorates the 50th anniversary of the Vietnam War.

With the Vietnam War raging in 1969, two young fathers report for duty. A man of great faith and a doubtful cynic. A quarter-century later, their sons, Wayne and John Paul (David A.R. White and Kevin Downes), meet as strangers. Guided by letters handwritten from their fathers from the battlefield, they embark on an unforgettable journey to The Wall—the Vietnam Veterans Memorial in Washington, D.C. Along the way, they discover the devastation of war cannot break the love of a father for his son.

“FAITH OF OUR FATHERS is coming out at a strategically important time in American history as our nation is currently commemorating the 50th anniversary of the Vietnam War,” said Chaplain (Maj. Gen.) Doug Carver, USA-Retired, 22nd Army Chief of Chaplains (2007-2011).