By Tom Duggan on September 11, 2012Comments Off on Ward 6 Social Club Best (and Safest) Kept Secret in Lawrence

By: Valley Patriot Staff – September, 2012
The Valley Patriot had the opportunity to sit down with the owners, Tony Fiore and Michael Pelletier, of the newly renovated Ward 6 Club earlier this month. Tony shared the colorful history of this private club which was originally founded in 1931 two years prior to prohibition ending. Mike adds the club was a genuine a speakeasy at one time. The Ward 6 Club is one of the oldest bars still operating in Lawrence. Tony says, “So many people from Lawrence have memories of coming to the club when they were just kids with their fathers and grandfathers.” While in the 50’s the club was geared to the polish population of the city, today it does not gear itself towards one nationality, but is proud to be inclusive. 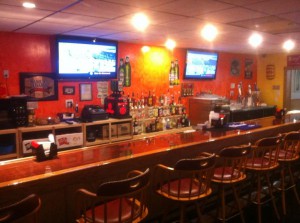 Michael Pelletier, the partner who stumbled upon this opportunity explains the chain of events. “I went into my attorney’s office and he had asked me if I wanted to buy a two family. I asked him. ‘Where is it?’ He said Springfield Street. When he said Springfield I was like ok, am from Spruce street, I can make that work because my background and given I was brought up in the city. I said why not, let’s go take a look. When I did, sure enough it was a two family and then he told me about the bar. They didn’t want any money for the bar, but he said ‘if you are going to do something with it you need to go and get the license fixed right away.’ I brought Tony to take a look at it.”

Tony added, “We got wind that the club was for sale and so we came down and investigated the property. The history behind it was that the club used to be very involved in community and had a large membership. But since there were problems with the neighborhood in the 80’s and 90’s, business dwindled down. Over the past 4 or 5 years the club was stagnant doing nothing. It had a small aging membership and the club did not have any money invested in it in quite some time. It looked like a dive from the 1970s. In fact when we first came into the space it looked like a dive from the 1970’s. It was very old and dated. The ceiling tiles were yellow from smoking and the bar was dark and not very inviting. Mike added that when making the decision to purchase, “We looked at it and got a bunch of advice from people. We said that if we are going to do this let’s do it right, and that’s what we did.”

Tony described the undertaking of the huge renovation. “We pieced everything together and family and friends helped us out. We got it going. We just put it together. I got an artist to give me color coordination’s on the walls. Basically, we went over the entire space. All the walls have been repainted and re-paneled. The bar top is all new. We salvage what we could which was 3 or 4 pieces from the original bar. We added new shelves and ceiling tiles, and we went through the bathrooms; everything is all updated now. The main function room has a new floor.” 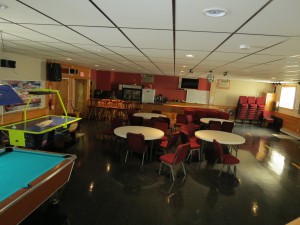 Michael reveals the biggest surprise of the club- the backroom. “You don’t know about the backroom until you look into it and it’s like an Egyptian tent. You look at the building at front and you just see it as a little hole-in-the-wall two family. When you open the door it’s like a huge ‘shandr-la’ type thing. When I went into the back room and saw the oak that had been done, that inspired me to continue the oak to the other side. A little bit of clean up, paint and refurbishing the back hall brought it back to life! We just changed everything.”

“We have a new sprinkler system coming up within the next 3- days and we are rehabbing the downstairs now. Downstairs is going to be for dancing and live bands and live entertainment in general. Some of these underground bands are going to be coming in and we hope to mimic the vibe of the middle-eastern restaurant in Cambridge. We want to being in what people want to listen to which could be anything from jazz to Kenny Chesney to country line dancing.” Mike and Tony both echo the importance of giving the members exactly what they want.

Michael is pumped up about the dart teams! “We also have a very large dart group that plays here regularly. Now that the fall is coming we anticipate darts here 5 days a week. We have become the biggest dart bar in the whole area! The way we did that is by asking them (the dart players) what they wanted and found out what the problems were with the other bars. They would not sponsor them, not give them food, they were not helping them with drinks like giving them the first round, and just did not offer good service. The players came here and just loved it! We will have 16 new dart boards which is the most around and people love playing with the special lighting on the panels.” 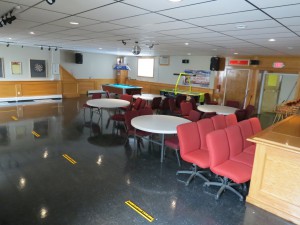 Nicholas ‘The Bone’ Pavone walked in during the interview, who Michael and Tony both jokingly referred to as the chief bartender, the chief of staff and president of the members association. Nick states, “We want to let people know it’s a great place to come down to even though it’s in a rural neighborhood on a city side street. The people are awesome here and they are great friends and everyone who has come here so far has had a great time. They dance, they laugh, they play darts, and they play pool. Cars are safe. Everyone in neighborhood loves us here we help them out, give them ac units when it’s hot, furniture, and help carry their groceries upstairs. They love us. We haven’t had one problem with the neighbors here since we started doing construction here.”

Mike and Tony are proud of their accomplishments on many levels, but definitely on a community level, “We have been able to change this whole neighborhood. Now we are so welcome here because of the clubs generosity and being one on one on one with them (the neighbors) and friendship and mentoring. We mentored several of the kids here with total respect of where they are and where they are coming from that we have changed the feeling of this place as a friendly bar instead of an ‘ us and them’ thing with white guys in here. It’s a neighborhood bar and social club, but its huge on families.”

The owners and management are proud of their working relationship and friendship. Family members pitch in and volunteer at the club. Many of the people who used to work at the old Ward 6 have become members of the bar and talk about the old times, but focus on the negative such as the poor management. Tony l says it’s not like that anymore under their new management, “the staff is good, we are all truthful none of us take off each other and we are friends. Me and Mikey go out tubing on the Merrimack River. Me and Tony go out fishing. That’s the way it should be.”

The Valley Patriot wanted to know if they preserved any of the history of the bar and asked if they had any old pictures. “Yes, check out some of the old pictures we have right here,” said the owners. They would date one picture to the late 50s and 60s from the style of clothing the people are wearing and it’s showing the back hall from two different sections.

There is a lot going on at the Ward 6 Club. The club is involved in the Merrimack Valley’s 45 league. The 45’s tournament starts late September and will be every wed night at 730 PM. Mike and Tony hope to combine the Sunday 45’s with football games and have wings and all eat out and have a great time. Its $ 5 dollars per person to join the league and even non-members can join the 45’s for now, but that may change in the future. They plan to have another pig roast in the near future, BBQ, and are going to do the season opener for the Patriot’s at the club wings. The Ward 6 club is also having a pre-Halloween party the second week of September with costumes.

The newly renovated club has 142 members in less than three months of being open and is showing no signs of slowing down! Come check out The Ward 6 Club located at 57 Springfield Street in Lawrence, MA.
Tom Duggan, Jen Cooper and Kimberly Morgan contributed to this story