By Tom Duggan on December 8, 2004Comments Off on Waste, Overruns & Mismanagement 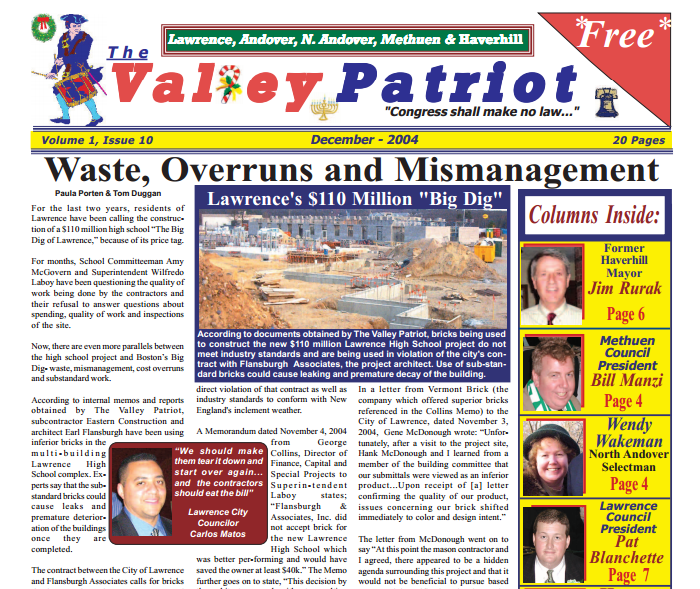 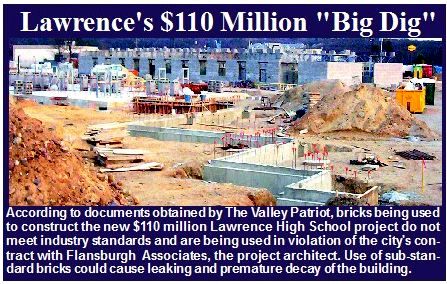 For the last two years, residents of Lawrence have been calling the construction of a $110 million high school “The Big Dig of Lawrence,” because of its price tag.

For months, School Committeeman Amy McGovern and Superintendent Wilfredo Laboy have been questioning the quality of work being done by the contractors and their refusal to answer questions about spending, quality of work and inspections of the site.

Now, there are even more parallels between the high school project and Boston’s Big Dig- waste, mismanagement, cost overruns and substandard work.

According to internal memos and reports obtained by The Valley Patriot, subcontractor Eastern Construction and architect Earl Flansburgh have been using inferior bricks in the multi-building Lawrence High School complex. Experts say that the sub-standard bricks could cause leaks and premature deterioration of the buildings once they are completed. 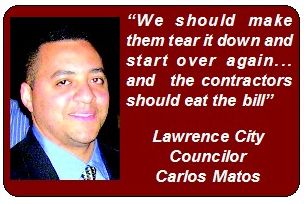 The contract between the City of Lawrence and Flansburgh Associates calls for bricks that have an absorption rate “not to exceed 4%”, but lab testing on the bricks being used to build Lawrence High School show an absorption rate at almost 6%. This is in direct violation of that contract as well as industry standards to conform with New England’s inclement weather.

A Memorandum dated November 4, 2004 from George Collins, Director of Finance, Capital and Special Projects to Superintendent Laboy states; “Flansburgh & Associates, Inc. did not accept brick for the new Lawrence High School which was better performing and would have saved the owner at least $40k.” (Collins Memo 11/04)

The Memo further goes on to state, “This decision by the architect was made without consulting the owner.” The owner of the project is the City of Lawrence, under the control of the School Department. 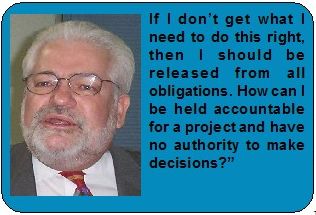 In a letter from Vermont Brick (the company which offered superior bricks referenced in the Collins Memo) to the City of Lawrence, dated November 3, 2004, Gene McDonough wrote: “Unfortunately, after a visit to the project site, Hank McDonough and I learned from a member of the building committee that our submittals were viewed as an inferior product…Upon receipt of [a] letter confirming the quality of our product, issues concerning our brick shifted immediately to color and design intent.”

The letter from McDonough went on to say “At this point the mason contractor and I agreed, there appeared to be a hidden agenda surrounding this project and that it would not be beneficial to pursue based on potential ramifications by the parties involved.”

Superintendent of Schools Wilfredo Laboy said that he was just as frustrated with the high school situation as members of the Lawrence School Committee. Laboy is often blamed for cost overruns and accused of hiding information about the project. “It’s nearly impossible to get any information from the contractors about the work being done,” Laboy said. “I knew nothing about this brick situation until recently and that’s because they refuses to work with us. We don’t get the reports we need, they refuse to justify expenses and they expect us to pay the bills, no questions asked.”

“Nobody is holding them accountable,” he continued. “We are going to put an end to it. There are a lot of people gouging us. The children are not on their radar screen, it is clear. This is going to stop.”

Laboy said he was concerned about the city’s lack of control over the project and the role he is expected to play.

“I am expected, as the legal owner of the project, to sign the bills and approve the spending. But any time I ask questions about the bills they submit, I am told ‘we don’t answer to you’. How am I supposed to do my job and provide oversight on this project when the contractors are going around me?”

Not only has Flansburgh Associates and Eastern Contractors purchased substandard brick at a higher price, the architect (Flansburgh), Heery International Inc. (the management firm which oversees the architect) and the General Contractor have “refused to provide inspectional services of the project and refused to hire the appropriate firms to conduct weekly site visits to observe the installation of mechanical, electrical, plumbing and fire protection.”

This was stated in a memorandum dated November 4, 2004 from George Collins to Flansburgh Associates, Inc. (Collins Memo 11/04)

Because of these refusals, City Solicitor Charles Boddy, Jr. has been asked to render a legal opinion to confirm a breach of contract, which could result in the City of Lawrence firing Heery International, Flansburgh Associates and Eastern Contracting. Lawrence Mayor Michael Sullivan has defended the contractors and publicly ridiculed School Committee member Amy McGovern whenever she questioned the contractor’s actions. McGovern has long questioned the cost overruns, the lack of oversight and what she has called “dishonest” and “stonewalling” when she tried to get information about the project.

Now, sources close to the project say they expect the city to fire Flansburgh and Heery for breach of contract, a notion Laboy would not rule out. “This is about accountability,” he said. “There just isn’t any. I believe there needs to be some redirection on this project and I will do whatever it takes to make sure this project is done on time and on budget. The citizens of the Commonwealth deserve to get their money’s worth. Nothing less than that is acceptable.”

When pressed about the possible firing of Flansburgh and Heery, Laboy responded, “All things are possible at this point, we are looking at the performance of all contracts and asking for authorization to do what needs to be done.”

Laboy denied that Sullivan was holding up the final agreement outlined in the memo of understanding, saying, “The mayor has a strong desire to get this on track and on budget. From what I’ve seen, he has every intention to make this a team effort. But, just as he has entrusted me to run a $110 million dollar school system, he should see that I am capable of handling the high school construction project.”

Asked what would happen if the mayor refused to give Laboy complete control of the project, he replied, “Look, there has been a question about who is in charge of this project from day one. It has never been stated clearly to all parties. If I don’t get what I need to do this right, then I should be released from all obligations. How can I be held accountable for a project and have no authority to make decisions?”

Lawrence City Councilor Carlos Matos said this could have been avoided long ago if the mayor was holding people accountable and paying attention along the way. He drafted a city ordinance months ago that would clearly define who was in charge of the project and spell out the responsibilities of all parties involved. Matos is waiting for the City Attorney to draft official language.

“Even if the ordinance passes now we have a big problem on our hand with this high school. They should tear down the whole thing and start over,” Matos said about the brick situation, “and…the contractors should eat the bill. What we are getting is not what we contracted for and it’s certainly not what we are paying for. This whole project has been mismanaged from the very beginning.”

“This could lead to long term problems with leaks and mold getting into the walls. We could have a disaster on our hands in a few short years. This has to be rectified now,” he concluded.

Superintendent Laboy said he was weighing his options on what to do next, but promised that the City of Lawrence “will recover damages.”

He said there was little chance that the existing project would be torn down but added, “it is hard to get to the bottom of everything that is going on when the contractor treats you like you don’t exist. I know the School Committee is very concerned. We are all working to resolve this situation, but I need these other matters resolved before we can get a full understanding of what happened and how to resolve it.”