By Tom Duggan on May 5, 2010Comments Off on We support south Park… Horrified by Comedy Central Censorship 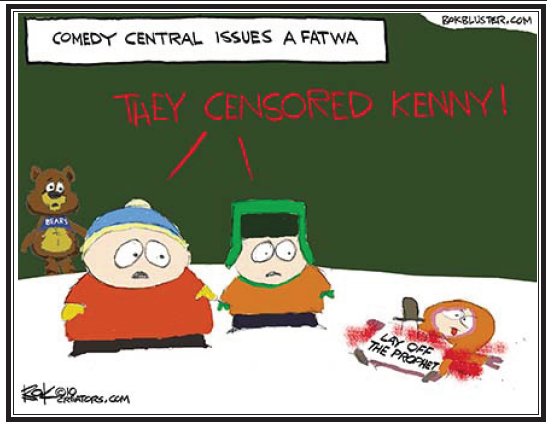 Will our president protect our rights here at home?

Last month, Muslim terrorists headquartered in New York City made death threats against the creators of Comedy Central’s cartoon, “South Park”. The threats came in response to an episode where Muslims were made fun of for threatening death upon anyone who depicts their “prophet” Muhammad.

Within hours, Comedy Central executives decided to appease the terrorists and censor the cartoon when it re-aired.

We are outraged that Americans exercising their free speech in this country are under threat of death for daring to violate the terrorist demands that non-Mulsims adhere to their satanic religious practices.

We are also outraged that the executives at Comedy Central have significantly chilled the free speech of every American in this nation. By giving in to these demands they have emboldened the Muslims to threaten other Americans who offend them. But, what outrages us the most is the fact that a terrorist Muslim group is operating in New York City with the blessing of our government.

With millions of satanic Muslim terrorists clamoring to wipe out our people, exterminate Jews and take down our government; allowing any radical Muslim group to operate on American soil is nothing short of suicide.

President Obama may not be at war with the terrorists who have made it to this country (and are trying to take us down from within) but they are certainly at war with us.

Comedy Central giving in to the demands of terrorists dealt a major blow against the freedom we cherish within our own country. And the inaction of the Obama administration have all but guaranteed that our free speech rights are no longer protected by our government.

The Valley Patriot supports Matt and Trey, the creators of South Park. We stand with their AMERICAN free speech right to offend Muslims, Jews or any other group they choose. We are horrified that our government does nothing about Muslim terrorists who are infiltrating our country, living among us and successfully intimidating us for not following the primitive satanic practices of their “religion”.

What a travesty it will be when our brave troops win the war against Muslim terrorists in the Middle East, only to come back home to a country that no longer represents the freedom they put their lives on the line to protect.

We implore the executives of Comedy Central to re-air the Mohammad episode of South Park, unedited. Moreover, as American citizens we demand that our government officials (from the president on down) protect our rights here at home before it is too late. We must protect the creators of South Park and eradicate any Muslim terrorists who operate on our own soil.

Otherwise, we might as well just surrender to satanic Muslims, bring home all our troops, turn over every Jew in America and start studying the Koran.