By Dr. Charles Ormsby on October 23, 2014Comments Off on What Are They Putting in Haverhill’s Water? ~ Thinking Outside the Box with Dr. Ormsby 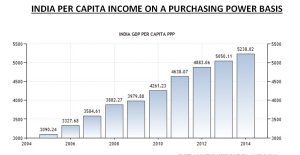 In our September issue, Michael Veves of Haverhill weighed in with a critique of my August article, entitled “Can You Resist the Devil’s Brew.”

I typically let such attacks pass and permit the readers of The Valley Patriot to make their own assessments of the veracity of such commentary. In this case, I will provide a brief response since Michael questioned the factual basis of my article and complained about the lack of listed sources. I will ignore Michael’s editorial commentary at the end of his critique and let the facts speak for themselves.

Michael starts out by taking issue with my statement that “the scourge of famine has never existed in any capitalist society.” His counter example is India where he states that “food is a scarce commodity for millions” and then declares, “Last time I checked, India is a capitalist economy.”

All I can say is that Michael needs to learn how to check his facts more carefully. In the latest index of economic freedom (source: Heritage Foundation & Wall Street Journal), India ranked 120th out of 178 countries.

As bad as its ranking is, India has substantially improved its economic freedom score over the last decade, but it is hardly a capitalist economy, ranking below Cambodia and Moldova. That being said, becoming “more free” (more capitalistic) does make a big difference.

Let’s see how India is doing in per capita income (on a purchasing power basis). The accompanying chart for India is provided by Trading Economics and the World Bank (Michael likes sources). It looks like more freedom leads to more prosperity … just the point I was making in my article.

INDIA PER CAPITA INCOME ON A PURCHASING POWER BASIS

By the way, thanks to statists like Michael, even the U.S. is no longer largely capitalistic. We lost that distinction nearly a century ago and today rank 12th in the world in economic freedom. In fact, we are no longer even in the “free” category. We now rank 6th behind Chile, Ireland and Denmark in the “mostly free” category and, for the last five years, our rank has consistently declined.

Elections do have consequences, sometimes painful ones.

Michael then takes issue with my comment that “countries ranked ‘mostly free’ have four times the per capita income of countries ranked ‘mostly unfree.’” He backs up his argument with the statement “Many countries south of our border, marked free or mostly free, do have four times the per capita income … all at the top tier of society, that is, the most wealthy.”Michael, Michael, Michael … countries are not “marked” free or unfree, they are ranked. The rankings are done annually by the Heritage Foundation and The Wall Street Journal.

Second, there are not “many countries” south of our border ranked free or mostly free … in fact, there is just one, Columbia, and it is the lowest of those ranked “mostly free.” It ranks 34th in the world. No other Central American or South American country is listed as free or even mostly free.

Third (pay attention, Michael) the comparison being made was between freer countries and less free countries, not between groups within a country. But yes, countries south of our border do have substantial income disparities between the wealthiest few percent of their population and the bottom 25%. Welcome to the non-capitalistic third-world where state run enterprises and political pull control the economy and limit the upward mobility of the vast majority of people. Unfortunately, we are heading down the same statist Hell hole.

Next, Michael complains about my claim that “In Communist China, before the introduction of market forces, hundreds of millions of Chinese lived on less than $1 per day.” He wanted my source for this claim. Well, per capita income in China was at or below 50 cents per day until the mid-1970’s and didn’t break through $1 per day until around 1986 (source: Trading Economics and the World Bank).

Michael, are you happy now?

But life in China is improving significantly. Now that market forces are allowed some freedom to operate in China, its per capita GDP has grown 10-fold over the last 25 to 30 years from around $1/day in 1986 to approximately $10/day now. Again, FREE MARKETS DO MATTER.

Then Michael complains about my statement that “the poorest 10% of Americans live more comfortably today than the monarchs of the pre-capitalist period.” I submit the following in support of my claim: flush toilets, anesthesia (and the rest of modern medicine), automobiles, TVs, computers, refrigerators, telephones, iPhones, airplanes, and Lady Gaga. Oh well, nine out of ten is pretty good.

Finally, Michael exhibits his utter ignorance of history, economics, and the meaning of the term capitalism. I quote from his critique: “Solid arguments can be made that before the coming of Christ, the Romans, Greeks, and Egyptians thrived in a capitalist economy. Millions were enslaved under the Romans whose elite lived in luxury.”

Write this down Michael: Capitalism is a social system based on the recognition of individual rights, including property rights, in which all property is privately owned. Millions enslaved under the Romans (and Greeks and Egyptians) hardly qualifies as capitalism.

Michael should get up to speed on economic history and learn that capitalism only began to emerge around 1700 AD (yes, that is after Christ) and that it took the better part of the next 100 years for mankind to begin to understand it (starting with Adam Smith’s The Wealth of Nations in 1776). The term capitalism wasn’t even coined until the year of Jefferson’s passing in 1826.

I will leave the assessment of the remainder of Michael’s critique to The Valley Patriot’s readers, assuming they think it worthy of their time.

Can someone have the EPA check the Kool Aid level in Haverhill’s water supply?