By ValleyPatriot on February 8, 2009Comments Off on What did he know, when did he know it? 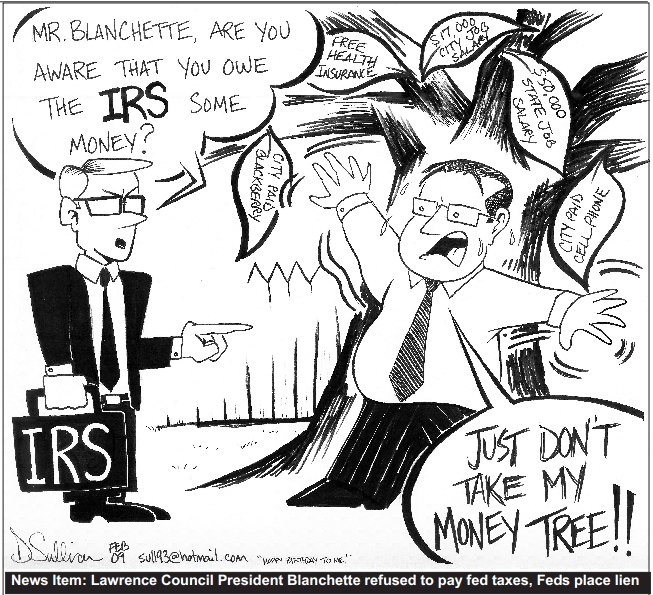 The feds placed a lien on Blanchette and, according to reports, tried to garnish his wages early last year. The IRS sent a letter to officials at Lawrence City Hall demanding that they start deducting what he owes from his city council paycheck every week, but that never happened as the City Attorney Charles Boddy (a long time ally of Blanchette’s) says he suspects the letter was “misdirected” by “somoene” in city hall.

For his part, Blanchette refuses to answer any questions on the issue.

What did Blanchette know? When did he know it? Who received the Blanchette letter in the city’s payroll department? Why wasn’t it processed like every other IRS demand?

Did they act alone?

As a public official entrusted with collecting and spending other people’s taxes, we believe Blanchette has a duty to answer these questions and answer them fully.

In a sad attempt to spin this latest scandal, Blanchette told the daily paper “I don’t have a money tree in my back yard,” adding that he would love to pay his taxes but he’s like everyone else in these tough economic times.

We just don’t buy that story.

Blanchette makes more than $70,000 a year from the taxpayers. He has free health insurance, no mortgage, a city paid cell phone, a travel allowance and a city paid blackberry, not to mention his 401K.

No, Patrick Blanchette is not like everyone else, the majority of his constituents do not make $70,000, do not get free health care, do not have a free cell phone … but they do have one thing in common with Patrick Blanchette … his constituents do not have money trees in their back yards either … yet, somehow they manage to pay their taxes as required by law.