What Happens at the Dump

By ValleyPatriot on October 2, 2018Comments Off on What Happens at the Dump 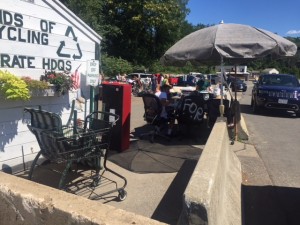 A 2016 posting in the “The Swellesley Report” lamented the moral demise at the Wellesley Dump, otherwise known as the Take & Leave area within the town’s Recycling & Disposal Facility. Apparently certain volunteers on site had turned this genteel Wellesley institution into a contentious environment by looting so much of the reusable items, that hardly anything decent was left for the shoppers.

According to Wellesley old-timers, people were once able to furnish their summer homes from items found at the dump. But a paradise it never was since there had supposedly been “plenty of catfights” over these spoils. The well-intended change to staffing by volunteers, who gave time in exchange for reductions to their real estate taxes, however, brought these different problems. And new rules were established: volunteers were to park in the lot on the other side of the dump to prevent them from easy access to their vehicles and hence excessive looting.

They were also to wear orange vests when on duty, during which time they were prohibited from shopping. Only when their duty time was over and the vests off could they shop for 30 minutes, like everybody else. (My repeated calls for details and clarification to Jeff Brown, RDF Superintendent, weren’t returned.)

But these new rules were not followed and I, having become a frequenter at about this time, after living in town for over 35 years and not believing in taking freebies if I could afford to pay (and if I couldn’t, I did without..) became witness to the spiraling local drama in this picket fence utopia of plenty. An almost Shakespearean spectacle. 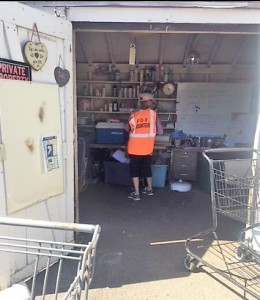 * THEY GRAB AND SNATCH
A truck drives up to drop off gardening equipment and a rabble of volunteers and regulars, most of them seemingly their friends, grab at shovels, shears, an electric trimmer, other items –all are gone before they hit the drop-off table. A hose, still in the original package is grabbed by a volunteer, presumably, I think, to be placed in the gardening area. The man next to me asks whether anyone saw where it went and was directed to the volunteer who took it, only to hear her say she never saw it.

* THEY LIE
Another volunteer interjects that this “other guy” – a man clearly just arriving from the adjacent parking lot- had taken the hose. Walking back to my car the would-be shopper passed me, grumbling: “Lying vultures- that’s what they are.”

* THEY CROWD YOU OUT
Fact is there’s not much useable stuff in the designated areas for children, household, gardening etc. where the offerings once were plentiful. If one wants better items, one needs to stand right by the un-loading area as cars come in. The problem is, certain volunteers get there first. If raised with the manners to wait one’s turn one has no chance at all. The volunteer with the eagle’s eye and pick-pocket’s hand pushes forward and quickly sifts through a bag or box to extract a treasure. If observed by too many, s/he’ll take the entire box and walk off with it, one presumes for distribution, but actually to load it into her/his car.

*THEY PILFER
S/he walks it through the shopping area and, setting it down somewhat out of sight, takes what s/he desires, even tucking items into her/his garment. If followed by would-be shoppers, s/he proceeds to leave some items on the tables and shelves for distraction while hanging on to selected items and continuing to scan the contents along the way.

*THEY DECEIVE
S/he keeps the booty in hand, under the arm-pit or slips it into one of the many discarded bags along the way, then whisks it off into the storage hut or her/his car, parked adjacent, exactly where it’s not supposed to be. Some volunteers have relatives who regularly drive up to collect their loot from the hut.

* THEY WORK IN TEAMS
Some volunteers work in teams, alternating the wearing of vests so one can grab and hand the other one without the vest items to ferry away. Vests are worn and taken off according to their momentary usefulness.

* THEY REGULARS
There are the regulars, folks fascinated by this theater of the absurd, or simply bitten by the freebie bug, – and the hard core hustlers, pickers and dealers.

* THEY LASH OUT
Both pilfering volunteers and the rabble of hard corers resent those who show visible bewilderment over their excessive grabbing. One volunteer at the unloading area piles small boxes under her arm-pit from a container that had just been dropped off. She throws the entire lot at me for merely asking whether she had looked inside to first see the contents. Later she lashes out at me without being able to explain, why exactly she is so furious.

*THEY CONSPIRE
One day an acquaintance tells me that she is afraid to go to the dump since she had complained about not getting any help with unloading a piece of furniture, one of the volunteer tasks, and was met with conspirational hostility by them the next time she showed up. Another person who objected to being shoved by one of the regulars was subsequently pushed by another member of that family.

* THEY BERATE
A patron, unloading several pairs of skis and appalled at the mob going at him asked about the identity of these folks, which I didn’t know. Having stood nearby, however, I was subsequently berated by a regular to “keep your (sic) mouth shut.” Ad verbatim. That’s what you had to do for being accepted, land a spot at the table of the dump elite, rulers over this second-hand kingdom. Sited right next to the storage hut.

* THEY INTIMIDATE
“You talk too much,” one of the volunteers admonished me, presumably after I was seen talking to friends on site or in the parking lot. “What kind of a place is this anyway, where one is forbidden to talk?” I asked. “You know,” he said, “what I mean.” “No,” I answered, “actually I don’t.” – It only occurred to me later that he was concerned I would divulge their unmentionables, having spent considerable amount of time there, in part to collect information for this article.

BUT PEOPLE AREN’T STUPID
Turns out that I wouldn’t be divulging anything new since people really aren’t that stupid. On August 15 someone left a large cardboard sign on the car of a volunteer with the words: SO MUCH GREED.

Above the din of ever louder complaints these few words on a piece of cardboard hit the nail on the head loudest. Whoever had left this sign knew exactly whom to target and had carefully chosen his/her words, which, as language does, distinguished this writer. These words didn’t insult, denounce or abuse but. They were directed at the worst offender personally, simply stating that person’s inability to fathom the voracious greed of the other.

Walking back to my car that day a man passed me with a box of rusty nails. “So glad I found these,” he said to me, “my Hydrangeas will love them – can’t find much else around here no more.”
*THEYdoes not refer to all volunteers but one or several.