Based on Truman’s analysis, the most important unemployment statistic is our own; it is either 0% or 100%.

Of course, that is not what is meant when unemployment statistics are quoted. Unemployment rates represent averages across the population and they are tracked and reported because they serve as a barometer of our nation’s economic well being. They also provide a simplistic scorecard for our government’s economic policies and our personal risk of being unemployed.

Unemployment statistics, along with numerous other measures, are also computed and reported for individual states and municipalities. Our ears always perk up when unemployment statistics are quoted that are directly relevant to the locality where we work (or did work).

Why? Because we are most concerned with how economic swings will affect us and our families. 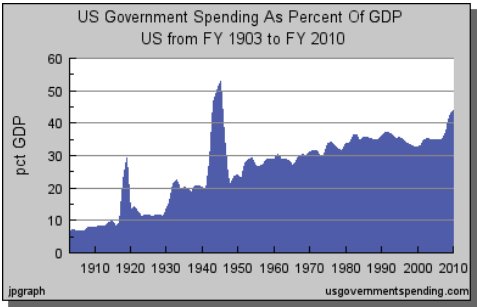 When we read news stories about the economy, we are told that the national unemployment rate is hovering just below 10% (9.6% in the latest report). Often this statistic is qualified by explaining that it only reflects those actively seeking employment. That is because the standard unemployment rate figures do not include millions of discouraged individuals who would like to be employed, but have given up searching for a job. If these individuals were included in the rate, the unemployment percentage would be substantially greater than 9.6%.

Also, the standard unemployment rate does not include other willing workers who may be working part time (8.6 million at latest count), or are otherwise “marginally attached” to the labor force because they cannot find full employment.

The Bureau of Labor Statistics tracks six unemployment rate estimates, imaginatively named U-1 through U-6 (Aren’t those bureaucrats clever?). The one you hear on the news every night is U-3. (If you quote the U-3 rate, say you learned about it in The Valley Patriot!)

A more accurate measure of unemployment is U-6, which includes discouraged workers and those marginally attached. If you were employed as an engineer or a bank manager, and you think working six hours a day at Burger King is an acceptable state of affairs, use U-3. If not, you should pay attention to U-6. 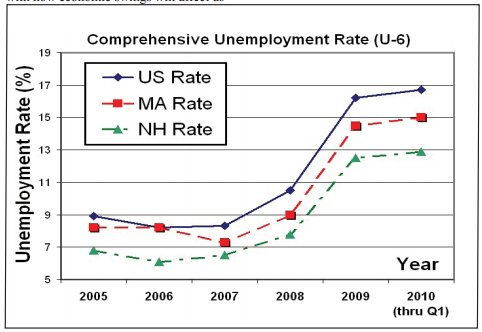 Now we have a good estimate of the real unemployment rate. But is that the end of the story? NO! And here is the secret factor you must consider: Are you a government worker?

The answer to that question is the real key to your unemployment risk. That is the KEY to the vulnerability of your family to the nation’s economic swings.

Because most government jobs are union jobs and because the government disproportionately uses tax dollars to protect and grow both government employment and union jobs, government workers have the special privilege of being nearly immune to the nation’s economic fortunes.

It is not clear whether employees of our intelligence community (CIA or NSA) or such pseudo-government entities as Freddie Mac or Fanny Mae are included in this approximate total.

But it is not just government jobs (jobs that receive government paychecks directly) that are protected. Jobs that reside outside the government but which are directly and routinely supported by tax dollars are also nearly immune to economic fluctuations.

Over a period of years, government support for one project or another will come and go, but the long term funding for public works projects steadily grows (in fact, such funding has historically grown faster during recessions as the government attempts to stimulate the economy). And don’t forget to add in the newly socialized companies like GM, Chrysler, and AIG, which are “too big to fail.”

When President Obama and Treasury Secretary Geithner say that the trillions of stimulus dollars being spent have “saved or created” millions of jobs, just what jobs do you think they are referring to? Not small business jobs, that’s for sure!

So what does this all add up to? What is the impact on your unemployment risk? The answer lies in the totality of government spending as compared to Gross Domestic Product (GDP).

The nearby chart shows government spending as a percent of Gross Domestic Product from 1903 to the present time. The current percentage is nearly 45%, but is rapidly closing in on 50%. If you eliminate the surges in government spending during the world wars, the government is commandeering an extra 4/10 of one percent of the economy every year. Even Reagan wasn’t able slow the onslaught.

If you use the current government percentage of the economy (45%) as a rough estimate of the percent of jobs that are protected and the remaining percentage of the jobs (55%) as representing those that are unprotected – in other words the jobs that absorb ALL of the swings in unemployment due to economic fluctuations – you can calculate the effective unemployment rates for each group.

So what is your unemployment risk? One percent OR over thirty percent?

Are you flying high or going through a depression?

Is it fair to forcibly (via government tax and spend policies) transfer nearly all of the risk of economic swings to half the population, while giving a taxpayer-funded safe harbor to the other half?

We have a chance to fix this on November 2nd.

This is YOUR chance, and maybe your last chance, to change history and bring about some long-needed balance between government and the private sector.