By Tom Duggan on August 5, 2013Comments Off on What We Are Doing About the Drugs in Methuen 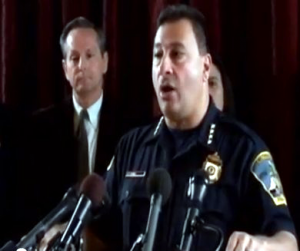 In light of the recent news stories surrounding the increase of heroin use in the Merrimack Valley, (which is a continuation of The Valley Patriot’s ongoing coverage of drugs in Methuen), Chief Solomon wanted to communicate to residents and business owners the efforts that the Methuen Police Department employs in this area of crime fighting.

Unfortunately there has been a recent increase in the use of heroin as an alternative drug for those who have become addicted to prescription opiates. This trend is fueled by the high cost as well as the difficulty of obtaining prescription narcotics along with the relatively low cost of heroin in the region.

The Methuen Police Department attacks crime with a regional approach by collaborating with local, state and federal partnerships. It has long been the Chief’s approach to work with other agencies and attack crime from all sides. Methuen, Lawrence and Lowell police partnered as this approach began years ago by swapping officers to patrol in each other’s cities. Chief Solomon proposed this as a way “to take the anonymity away from the criminal who frequently crossed borders to commit crimes and as a way of addressing the crime triangle.” This additionally helped to forge Law Enforcement interagency cooperation and relationships.

One of the most visible crimes today is that of the using and distribution of illicit drugs. The increase in the use of heroin has transcended age barriers in the greater Merrimack Valley. The Methuen Police Department’s Narcotics Unit, in collaboration with other outside agencies, has the mission of increasing the quality of life for its residents, while significantly reducing the violations of the state narcotics laws. The Narcotic’s Unit works with all agencies and task forces when it comes to ridding the City of Methuen, as well as the entire Merrimack Valley, of persons who choose to come here to distribute, purchase or ingest illegal narcotics. Illicit narcotics use fuels crime on a daily basis to include housebreaks, car-breaks, shoplifting, robbery, purse snatching and prostitution, as well as many other quality of life crimes.

In January of 2013, the Methuen Narcotics Unit underwent a transition. Chief Solomon transferred the unit from the Criminal Investigations Division, which was overseen by their Lieutenant to the Community Outreach Division to be overseen by Lt. Mahoney. Together Lt. Mahoney and Sgt. Gunter, the Narcotics Unit Supervisor, went to work with their team. Prior to the transition, from January 2012 through July of 2012, the Narcotics Units work resulted in 35 narcotics arrests and since this transition of command supervision, the Narcotics Unit for the same time period this year has made 103 arrests. At the request of the unit supervisors, another detective was added to the unit on June 23, 2013 furthering Methuen Polices pledge to this fight. This detective is a veteran officer who has prior experience in narcotics investigation.

Partnerships and community involvement are key components to successfully fighting street drug dealing and related crime. The Narcotics Unit works with citizens and neighborhood groups on a daily basis to gather intelligence and address quality of life concerns that are outgrowths of illicit drug activity. The Narcotics Unit has an anonymous tip line and they encourage citizens and business owners to call in their tips to 978-983-8794. The Methuen Police Narcotics Unit has been working hand in hand with the Essex County Sheriff’s Department on a continuing basis and has had a member of the Sheriff’s Department assigned to assist the unit since January of 2005. The Narcotic’s Unit has also worked with the Cross Borders Initiative based out of Lowell, which is a collaboration of several law enforcement agencies from Massachusetts and New Hampshire and is led by the Drug Enforcement Administration (DEA). Our Unit has also worked with other branches of the Drug Enforcement Administration and had a member assigned to a Boston based DEA regional task force.

In addition to sharing information with neighboring cities, the unit also works with Lawrence Police Department’s Street Narcotics Unit on a regular basis as the drug trade crosses city lines. The Methuen Narcotic’s Unit along with six other agencies assisted Lawrence’s Narcotic Unit on June 19th, 2013 with a quality of life drug sting, which resulted in the arrest of 22 subjects. The Narcotics Unit has also worked with narcotic detectives from the cities of Andover, Haverhill, Lynn, Newburyport and Groveland.

Currently, the Methuen Police Department has a member assigned full time to the High Intensity Drug Trafficking Area (HIDTA), FBI North Shore Gang Task Force which is a regionally formed gang unit and has members from the Federal Bureau of Investigations, the Immigration and Customs Enforcement Agency, the Massachusetts State Police and local law enforcement agencies, including Lawrence Police. This unit has a high presence in the Merrimack Valley area working to combat drug and gang activity. The Methuen Narcotics Unit frequently works in conjunction with the Federal Homeland Security Investigations Department, and the Essex County Drug Task Force, which is manned by Massachusetts State Police.

The Methuen Narcotic’s Unit has been a part of the Haverhill Task Force (HTF) for years; this is a joint task force between the Haverhill Police and Methuen Police Narcotics Unit which focuses on gang and drug activity that crosses city lines on Route 110. This partnership has eradicated the drug transactions in the neighborhoods, which were situated right at the borders of both communities. The Methuen Police Department has maintained its partnership in this task force and has spread the reach of this task force under the Shannon Grant to saturate areas in the city which are considered high crime and high drug areas. This partnership has proven to be an invaluable asset to both cities.

Working with such a wide range of agencies has increased the manpower addressing the problems, increased the skills of the officers participating and has resulted in the arrest of hundreds of subjects for distributing, possessing and ingesting illegal narcotics as well as the seizure of heroin, cocaine, crack cocaine, marijuana, prescription pills, and steroids. This collaboration has also resulted in over 20 search warrants, which resulted in the seizure of large amounts of currency. Currently, the Methuen Police Narcotics Unit is working with several outside agencies on ongoing drug investigations which include Federal Task Forces, as well as local task forces.

As you can see there are numerous agencies and task forces, which have been brought together to battle the drug problem in the Merrimack Valley. Working together with these other agencies has created a partnership that brings great value to the war on drugs in the City of Methuen. The Methuen Police Narcotics Unit is eager to work with any agency in an effort to combat all aspects of the drug trade, which will in turn reduce crime as a whole.

As related today by Chief Solomon, “Experience has shown that even with multiple law enforcement agencies working together, the success and sustainability of any law enforcement activity, particularly the reduction of crime and the maintenance of order, needs the public’s acceptance and assistance, and two-way communications from the police to ultimately make a difference.” The Chief asks “all of our residents and business to join one another in the See Something, Say Something campaign.”

There are various ways to keep up to date and in communication with Methuen Police, below is a list of some of the more popular social media sites and MPD numbers:

In cases of emergency please dial 911