By ValleyPatriot on November 5, 20222 Comments

There’s something about the habits of we military folk. 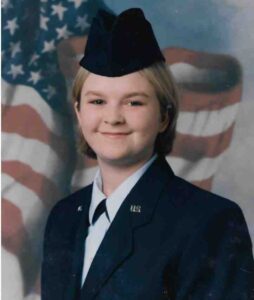 The military teaches and trains us to be methodical from day one. Whether it’s to stand at attention a certain way, the way we should walk, to the way we fold our clothes. This writer still folds and hangs his clothes with near perfect alignment from his days in the military for better or worse. When we wear our clothes, we make sure we wear them a certain way, in particular, our “gig line.” It is the line of your button-down shirt and aligns with your belt-buckle, never off-set. However, never in my wildest would I imagine these habits would become a story in a Massachusetts State Representative race.

Recently, Turtleboy Daily News published a story about a Billerica State Representative Candidate, Teresa English. In the piece, aside from the political banter, Mrs. English claimed she served in The United States Air Force, this writer’s alma mater. What drew my attention was the photo of a political campaign promotion of Mrs. English. In the photo, Mrs. English is in the traditional Air Force Blue uniform, but that’s not what caught my attention. Aside from what looked like a terrible photoshop image of her “cover” (a hat), was also the “U.S.” insignia on her lapel. In The Air Force, enlisted personnel have the U.S. encircled, officers do not, hers was that of an officer. However, her cover, photoshop or not, was plain, that of enlisted status. Officers in the military have a silver or gold embroidery on their covers, depending on their rank. Clearly this was a mismatch.

I commented about this uniform irregularity on social media Candidate English was mentioned in, which incredibly was missed by many, but if you never served in the military, you would be none-the-wiser.

Upon this discovery, many commented to put the entire issue to rest, would be to provide a copy of her DD-214. A DD-214 is what every service member receives upon discharge from the military. As of this writing, Mrs. English has not publicly provided her DD-214. What she did do is block this writer on all her social media upon the discovery of her uniform not being proper.

Is Mrs. English truly a Veteran? We don’t know. The entire episode could be put to rest by simply presenting her discharge paperwork. What this writer does know, and I think I can speak for every Veteran out there that looks at her political campaign promotion carefully, is that her uniform doesn’t add up. Massachusetts General Law Chapter 272, Section 106 is the “Stolen Valor” statute, which carries up to a year in The House of Corrections, a $1,000 fine, or both. Maybe this should be put to the test? Let The People decide.

EDITOR’S NOTE: Teresa English is a candidate for state representative in Billerica whose military service has been called into question due to her improper usage of insignias. She has refused to provide any proof of service. If any Valley Patriot reader has information to confirm or dispute English’s claim of service, please email the Valley Patriot (anonymously if you like) at valleypatriot@aol.com ◊