By Tom Duggan on November 1, 2019Comments Off on Who are the West District City Council Candidates in Methuen 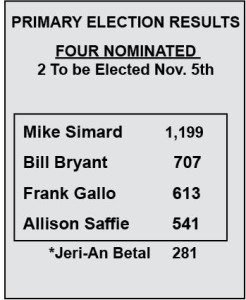 The Methuen City Council is made up of nine members; three city councilors are elected at-large (city-wide), and two councilors elected from each of the three districts (East, Central, and West). In the West End, both incumbent city councilors George Kazanjian and Lynn Vidler are not seeking reelection, leaving two open seats. Kazanjian cannot run again because of term limits.

Four candidates made it through the primary (out of five) to replace Vidler and Kazanjian. In the primary, hero Lawrence Police Officer Mike Simard topped the ticket, beating the second-place finisher Bill Bryant by 492 votes. This means it is most likely Simard will hold that top spot in the November 5th final election.

It also means that Bryant, Gallo, and Saffie will be fighting for that second spot on the city council to represent the West End.

Because a much larger turnout is expected in the November 5th election, all three candidates have a legitimate shot that second seat.

Hero Lawrence Police Officer Mike Simard received the Officer Tom Duggan Hero Public Safety Award last year for his bravery in the line of duty. He has three children in the Marsh School. He is also a veteran of the U.S. Air Force.

Simard got involved in Methuen politics a few years ago when the owner of the Sweetheart Inn wanted to sell his property to a developer that wanted to put in more than a dozen units of housing. Simard appeared before the city council and called Mayor Jajuga corrupt, spoke out against the project, and demanded that the community development board follow the legal restrictions as to how many units of housing are allowed on that property.

Surprisingly, Simard has also been outspoken about what he calls “mismanagement of the police department” and has called Chief Solomon to task saying that what was going on at the police station is not much different than the corruption in city hall. He was overheard at his kickoff party telling supporters that he decided to run for council when he saw Bill Bryant pull nomination papers. “We need to stop electing people with conflicts of interest”, he said.

“That’s what got us into this mess.”

Simard has run a positive campaign, refraining from attacking his opponents and focusing on the issues facing the city. He says he wants to increase the amount of businesses in the city to relieve the tax burden on residential homes. He also said he wants the school department to provide line-by-line information the way the council was transparent with their budget earlier this year.

“City government is a mess; years of waste and mismanagement have led us to this point and it’s going to take objective people with no conflicts to get in there and start fixing things.”

Bill Bryant has lived in Methuen for the past 25 years and is originally from Lawrence. He is married and a father of three children who go to the Methuen schools. His wife works as a teacher in Methuen. He has been active in Methuen sports and is president of the Methuen Boosters as well as the MAIC vice-president.

Bryant originally gained his notoriety on the political scene when he co-hosted Tim Wood’s “Ranger Nation” podcast, and then as co-host of the political show “Looped In Live”. He is the principal of the Crest Collaborative School which gets millions of dollars from the City of Methuen.

Bryant says he understands the problems in Methuen and the lack of communication between officials and the public is a big concern. He promises to be open and transparent and be a voice for the people in his district.

Bryant advocated at a city council meeting, taking money from the police department and giving it to the school department.

Bryant has injected himself into the mayor’s race with his public endorsement of Jen Kannan. He is also a strong political ally of controversial East District City Councilor Steve Saba. With a grueling campaign schedule in a hotly contested race in the West, Bryant had no problem taking time away from his campaign to raise money for the Methuen Boosters last week. he says his focus has always been on the kids in the city and he can better serve their needs as a member of the city council.

Frank Gallo was born and raised in Methuen and owns a construction and plowing business in the city. He currently sits as chairman of the Housing Authority board and has for the past six years. Frank says he is running to bring fresh ideas to the city council and move Methuen forward by resolving the issues that are currently clouding the city.

During the Paying Attention Podcast debate Gallo said he blames the controversy over the police superior officers’ contract squarely on the city council.

He said he doesn’t understand why nobody can answer just how much police officers are making. “I’m a no-nonsense kind of guy,” he told The Valley Patriot. “You mean they can’t tell us just how much people are being paid? I don’t buy that at all. If you want to know the real numbers let’s just take a look at their W2s and this mystery is solved. I just don’t think the people involved want to know the real numbers. It gives everyone deniability and let’s everyone point the finger at everyone else. We need accountability here.”

Gallo joined all the other candidates in this race opposing the Sweetheart Inn project. He said he feels bad for Mike and Leanne Condon, but the voters need to stand behind what the community development board ruled was the standard for two-acre zoning. “You can’t bend the rules for one person,” he said during the Paying Attention debate.

Saffie got involved in the political process during the Sweetheart Inn controversy and opposed the project. She says her number one goal if she is elected is to start holding people accountable. “We have to have these very uncomfortable conversations. Nobody wants to have them, but we are adults and we need to do it,” she says.

Saffie is publicly supporting mayoral candidate Neil Perry and says she is still angry that former City Auditor Tom Kelley refused a direct order by the city council to reveal which councilors he told about the “stacking provisions” in the police superior officers’ contract in 2017.

“I think that’s a problem. There’s no accountability. So, there are people sitting on this council who knew this was a bad contract, there’s evidence that no one read it according to the Inspector General report.”

Saffie said she is sick of city workers getting away with doing whatever they want and if she is elected, she will demand accountability.

Saffie said she was also troubled that the school committee refused to fire superintendent Judy Scannell and then refused to investigate who else was involved and how it happened in the first place. She hinted that a new mayor and school committee can still conduct an investigation after the election if the right people are elected. Saffie says she is eager to hold the school department accountable for what she called out of control spending.

“It’s easy to say ‘we have to move forward’ but you can’t fix anything unless you confront it. We have to hold people accountable because if you don’t, they get away with it and then it is going to happen again. I am adamant about holding people accountable,” she said. She also added that having no family members working for the city and having no conflicts of interest will make it easier for her to do exactly that.

Who are the West District City Council Candidates in Methuen added by Tom Duggan on November 1, 2019
View all posts by Tom Duggan →