By Tom Duggan on February 26, 2020Comments Off on Who Will Enforce the Law In Salisbury? 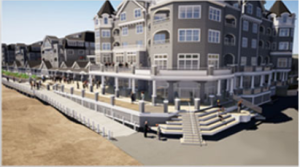 As of right now, it looks like the state Administration’s Seaport Economic Council gave Salisbury a nearly $1 million grant in 2017 to build the 625 foot boardwalk on Ocean Front South, so that in just a few years the Town of Salisbury would consider allowing this public seaside boardwalk to be connected to the deck of the “Big Block” proposed 235-unit Oceanfront condominium complex that are surely to become apartments.

The Big Block Development Group consists of Capolupo, Nabhan and Mulcahy families who initially planned on constructing this project in 2017.

Most importantly, the Town of Salisbury officials were well aware that this proposed “BIG BLOCK” project violates the 1980 State Executive Order 181 Barrier Beaches. That executive order was enacted to strengthen the protection of barrier beaches in Massachusetts, and orders/directs all relevant state agencies to adopt 7 policies regarding mitigating future storm damage to its barrier beach areas.

Also, in 1985 Salisbury officials signed a US Environmental Protection Agency/State of Massachusetts Sewer Special Grant condition agreeing [that Salisbury] shall prohibit connections to the sewerage system from any new development built within a 100-year flood plain, wetland, or barrier beach (Salisbury Beach).

Coastal Zone Management (CZM) and Mass Disaster Recovery Team has raised concerns to the Town of Salisbury that the barrier beach appears to be eroding rapidly in the beach center.

CZM has informed Town Manager Neil Harrington and Town Planner Lisa Pearson that “Based on its coastal setting, CZM is concerned that the potential for storm damage impacts to development in this area is significant and very real, and that inappropriate development will adversely affect the barrier beach resource area’s ability to respond to increased wind and wave energy associated with storms.”

Is there anyone out there willing to force the rogue Town of Salisbury to start following the law? Or will town officials just continue to get away with doing whatever they want to satisfy their money man Wayne Capalupo? It seems only the voters of Salisbury are capable of doing that.

Maybe they will show up at the next Planning Board public hearing at Colchester Room at Town Hall on Feb. 12th and put a stop to it. Given how they voted in the last election, however, I’m not holding my breath.