By ValleyPatriot on October 4, 2011Comments Off on Why I Endorse Al Dinuccio 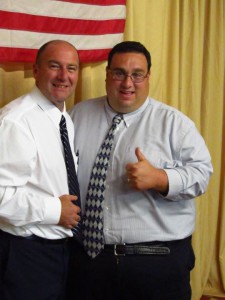 Starting this endorsement article, I would be remiss by not taking this opportunity to personally thank the hundreds of voters who expressed confidence in my candidacy for Mayor of Methuen.

While we ultimately will not advance to the final round, we achieved a strong third place finish, promoted a multifaceted conservative agenda and likely set the table for Al DiNuccio to become the next Mayor of Methuen— a leader who will not be influenced by the self-centered, tax-and-spend machine politics of the past; who will start the process of ending the lawsuits caused by political meddling; and who will give Methuen residents an open and transparent municipal government that they truly deserve.

I can state this political belief with confidence, because Al and I shared the same goals and vision for the City of Methuen, especially since we campaigned as rivals who respected each other and presented bold ideas, including a conservative and realistic approach to balancing the budget, restoring integrity in government, and highlighting public safety.

As we competed in four debates (one radio and three televised engagements), I realized that Al would not back away from his ideals, that he would vehemently challenge the status-quo and that he actually conducted research on the major issues of the day. We both declined union donations and endorsements, and we were proud to not receive donations from individuals found guilty of ethical violations. We pledged not to raise property taxes, vowed to implement term limits, promised adherence to civil service rules and called for managerial studies of the police and fire departments.

During the later stages of the campaign, Al and I formed a mutual understanding that materialized into a verbal commitment—the victor would receive the endorsement of the runner-up. Unfortunately, in this case I achieved that distinction, in no small measure to the late arrival of Jack Cronin, whom I stipulate had a sizable base of senior citizens and independent-minded voters similar to me. When two candidates with similar support networks are competing against each other in a multiple person race for one available seat only, which is obviously different from a multiple seat councilor contest or a school committee race, you often have the split results witnessed during the 2011 Methuen preliminary election.

But, let me make this point perfectly clear—- Jack Cronin had every right to run for Mayor, I do not question his reasoning, I will not attack him personally and I know it was very difficult for many mutual friends to decide between us. I do not begrudge anyone, and I hope my statements in this column reflect the finest spirit of our democracy. I also hope that many of Jack Cronin’s supporters will now cast a decisive ballot for Al DiNuccio in the November election. Many seniors have not experienced a cost-of-living adjustment in four years, have undervalued homes, and are dealing with rising medical and insurance costs.

They are also not pleased with the depleted services in Methuen yet grapple with annual property tax increases. They are not naysayers, but advocates of constructive change. When two of the top three finishers are espousing a plan not to raise property taxes, are traveling door-to-door and listening first-hand to the grievances of hardworking and often lifelong Methuen residents and are advocating constructive changes, the voters are clearly not satisfied with local politics as usual. This column should also not be interpreted that Al automatically will be elected Mayor in November.

Al is not taking anything for granted. He has assembled an extensive grassroots organization, re-opened his campaign headquarters, placed hundreds of signs across Methuen, received the support of ticket topping officials from the City Council and the School Committee, and conserved his resources for the stretch run. Al is also reaching out to different groups to listen intently about their ideas to better Methuen.

He has attended recent forums and debates, and he has attempted to converse with both elected and appointed leaders in Methuen’s government. Al will focus on the issues, prepare for the final debates, build on his momentum and mobilize his troops. Al will rise above any counterproductive personal remarks and any unwarranted attacks on his character.

I am strongly urging all of my supporters, especially those who may have avoided the preliminary election, to join with me in supporting Al DiNuccio for the general election. This is a defining election in our city’s history, because we can move away from costly and divisive machine influence, favoritism, political infighting and closed meetings to an era of televised meetings, office hours at different locations, an open door policy, an end to political interference in the police and fire departments and good faith talks with the various unions without the leverage of union donations and special interest monies. We have much work ahead of us, and I look forward to helping the DiNuccio Team.

Ken Willette is a member of the Methuen School Committee, and a former City Councilor. You can email him at kennethwillette@verizon.net