By Tom Duggan on November 8, 2016Comments Off on Why I’m Voting for Donald Trump for President 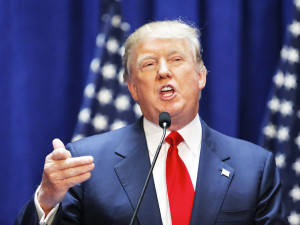 Donald Trump wants to build a wall protecting our southern border with Mexico.

Trump will deport criminals who are also illegal aliens and put them in jail if they come back illegally a second time.

Clinton will make them all citizens and give them welfare.

Trump wants those here illegally to go home and apply for citizenship.

Clinton will make them all citizens and give them welfare.

Trump will stop the flow of immigration from countries that hate us.

Clinton will open the floodgates to those countries and give them all welfare.

Clinton will raise them.

Clinton will significantly expand them.

Trump wants to stop shipping our jobs to other countries.

Clinton wants to outsource as much as she possible can.

Trump believes we are an independent, sovereign country.

Clinton believes we should be part of a one world government.

Clinton thinks your kids don’t deserve to inherit what you leave them when you die.

Trump stands with the men and women of law enforcement.

Trump wants to stop with the political correctness and call things what they are.

Hillary wants us all to check our white privilege.

Trump will spend more money building up our military.

Hillary will spend more money on citizens of other countries.

Trump understands you have to go in and wipe out ISIS like YESTERDAY.

Hillary likes long protracted wars with troops on the ground.

Hillary will support and expand it.

Clinton thinks the Department of Education should dictate curriculum and spending on your local schools from Washington DC.

Trump is a real outsider.

Hillary has decades of scores to settle and favors owed.

Trump will appoint supreme court justices who will apply the constitution as written.

Clinton will appoint supreme court justices who think the constitution is a “living breathing document” that can change to say what we want it to say, instead of what it actually says.

Hillary Clinton not only supports abortion, she supports government funding of abortion and even supports late term abortions in the 9th month where the baby is literally killed as it is exiting the womb.

Trump understands how corrupt and dishonest the news media is at the national level and takes it on.

Hillary benefits from it and says the national news media is fair and balanced… forgive the pun.

Trump lies about stupid things like who said what 20 years ago.

Clinton lies about government actions, her role in them, her own actions, and rewrites history after she is caught lying.

Trump believes our enemies should fear us.

Hillary thinks we can make our enemies in Iran and Afghanistan like us if we are just nice to them.