By Paul Murano on January 11, 2016Comments Off on Why I’m Voting for Marco Rubio ~ BENEATH THE SURFACE WITH PAUL MURANO 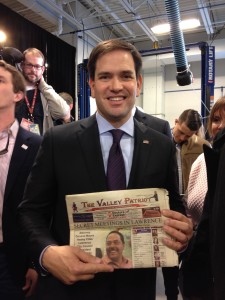 Since I now live in NH, I thought I’d take advantage of seeing the presidential candidates up close and personal this political cycle.  There are two ways I judge candidates: 1) who I think would be best for the country, and 2) who I think has the best chance of winning.

On the issues, my attitude Cheap inflatable water slides on immigration was initially closer to Cruz and Trump, on foreign policy it was closer to Trump and Rand Paul, on social issues I liked what I heard from Cruz, Santorum, Carson and Fiorina, and on the economy I saw little difference in all of them.  Despite all that, after seeing and talking with Marco Rubio at three times, I now have a candidate.

What solidified it for me?

Before I get into substance, I saw a genuine person who lives a genuine life who wants to make his country better, and has what it takes to do it.  I think I can intuitively tell the difference between real and rehearsed ‘genuineness.’  Hillary Clinton is certainly the biggest faker of sincerity, but I also sense it in Cruz and Trump.  On the other hand, Rubio has a peace about him that seems to be rooted in a self-knowledge made possible only through a knowledge of God.  He, his wife, and four children have struggled in living the life many of us have: tens of thousands in student loans, immigrant parents, middle class neighborhood, aging parent who needs special assistance, and trying to raise kids in a world that seeks to destroy their innocence.  His passion and understanding come not from theory, but from experience.

Sen. Rubio is down to earth.  After hearing him and having the opportunity to speak with him I felt that, if he were living in my apartment complex, I’d have a tennis friend and someone who would come down on Sundays to watch football with me and my wife.  He’s a suffering Dolphins fan, but greatly respects what the Brady-Belichick tandem has done over the years.

Sen. Rubio transcends the establishment-insurgent conflict now present in the Republican Party.  No one rightly knows where to pigeonhole him.  He has appeal to both factions, as he does to independents.  He is level-headed, even-tempered, and deeply thoughtful. I now feel a little better about his apparent neo-con hawkishness, and am deeply impressed with his grasp of the deeper problems ravaging our society today relating to family breakdown and disrespect for life.  While other candidates give this lip service, he sincerely understands the root of the problem.  I sensed he could be trusted with making important presidential decisions that could affect everyone. 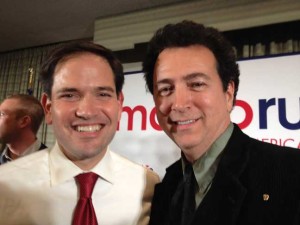 As for his immigration stand, I know many conservatives continue to have a problem with his record, and I am with you on that.  But after hearing him explain his position, I saw that he had a grasp of the bigger picture of it being a national security issue, and a grasp on how best to use current technology to stop illegal immigrants from overstaying their visas, to ensure that American companies do not hire them, and to build a high tech fence to secure the borders.  Yes, Trump and Cruz promise to deport all 12 million people living here despite how many experts question its possibility, and Rubio never denies that he would deport, but he communicates a more comprehensive approach to the problem that will work for our security and sovereignty.

Lastly, Rubio is articulate and can think clearly on his feet.  He will take Hillary’s candidacy apart without seeming like a bully, whereas the approach of Trump or Christie could backfire in her favor (remember her “cry” in 2008 that won for her the NH primary?).  And this is a very important point: There is a reason why so many Democrat pundits do not want to face Rubio in the finals and why so many polls have him as the one candidate who consistently beats Hillary. Next to her he is young, dynamic, has a great story to share, is future-oriented, attractive, has good hair (important in presidential politics), will attract Latino voters, young voters, women voters, independents, and will take the all-important state of Florida from the Democrats.  He’s got some of that JFK appeal that crosses party lines.

While there are many good candidates on the Republican side this year, I have concluded that the one who has the best chance of saving this country from self-destruction (and that’s not hyperbole with Hillary ready to continue the Obama-nation) is Marco Rubio.  Think about it.