Why is There a Left and a Right

By Paul Murano on June 26, 2013Comments Off on Why is There a Left and a Right 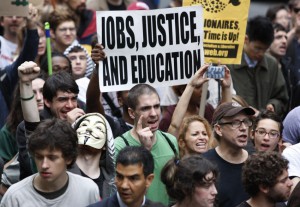 In considering the great left/right divide of contemporary culture it’s important to ponder beneath the surface on the reasons why. There is much debate in the media on surface political issues, yet it is rare to hear discussion on why there are two poles of thought, and why different basic premises of life are adopted by different people leading to sharp disagreement on social and moral issues.

There seems to be two fundamental complementary principles universally recognized throughout history.

The Chinese called it the Yin and the Yang, the Greeks the animus and anima. In popular culture you had Cupid and Psyche, Romeo and Juliet, John Wayne and Marilyn Monroe. Additionally, every unit, body, and organization has a head and heart, authority and generosity, leadership and nurturing.

The two sides of love are justice and mercy, truth and compassion, punishment and forgiveness, signifying the masculine and feminine dimensions that ultimately reflect the two “sides” of God. These two poles reflect the divine by distinguishing themselves as individuals while coming together in unity, resulting in trinity.

For example, hydrogen and oxygen is water, hot and cold is warm, a man and woman make marriage, and male and female reproductive cells create a child. The two become one, to become three. This is the great mystery of life.

One irony of our era is that while the roles of male and female have deliberately become blurred, the masculine and feminine of politics and culture have become much more pronounced and polarized. The left and right today have very different visions of reality, but without a bridge that brings them together.

The masculine and feminine poles in the political realm include liberty and equality, excellence and fairness, law and leniency, obligations and rights. They have become battle lines rather than sources of mutual attraction, and hence American society is divided. At no time since the Civil War has this become so apparent.

Head and heart have lost many of the organic pathways that keep them connected as one body.

While conservatism representing the masculine aspect of society (the head) properly seeks to lead and protect the body, liberalism representing the feminine (the heart) focuses on nurturing the internal and assisting the needy. While the danger in the former is the easy abuse of power, the latter is two-edged sword: While a mother would defend her criminal son and accuse the cop or judge for being mean, so too the cultural left on its own denies unpleasant truths and creates its own subjective reality, often out of displaced compassion. We all want a pitbull mom when we’re in trouble; but when truth, justice and law become higher values, as they tend to be with the cultural right, compassion then takes its proper place.

When objective truth is denied and when the heart is not led by the head there is confusion and chaos.

On the other hand, when the head is not inspired and prompted by the heart, trouble and misfortune often ensues. The head seeks respect, the heart love. Truth without love is harsh, and love without truth is pure sentimentality.

Left unchecked the cultural left will continue to create a false reality out of fear, disordered desire, and displaced compassion, couched in politically correct language and attack-the-messenger tactics. It will continue to feed the moral chaos and culture of death until she is led by a cultural right that is trusted.

Only then will the two poles attract – head and heart, masculine and feminine, right and left – and the balance of order be harmoniously restored.

abortion, left vs right, Paul Murano, right and wrong, why is there a left an a right