By ValleyPatriot on April 10, 2013Comments Off on Will the Real Dan Rivera Please Stand Up? – Valley Patriot Editorial – April 2013 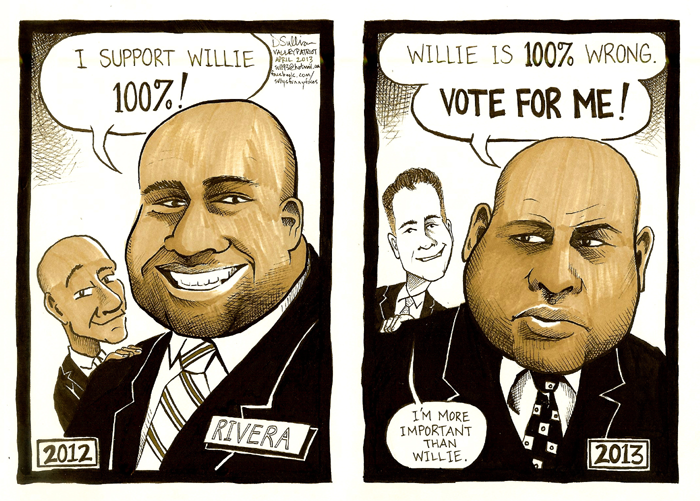 We find that odd.

For the last two and a half years, Lawrence City Councilor At-Large, Dan Rivera has approved nearly every hack appointment made by the embattled Mayor Lantigua. His approvals included the now indicted Deputy Chief Melix Bonilla, and indicted former Lantigua Chief of Staff, Lenny Degnan.

He has made unfounded racial accusations against the motives of City Councilor Marc LaPlante (a tactic Lantigua has perfected to an art form).

He advocated for Lantigua to be able to borrow $35 Million after Lantigua had already spent more than $280 million that the state taxpayers had sent him (in local aid) to run his city. Furthermore, after Lantigua received the $35 Million loan, and spent every last penny of it, Dan Rivera went along with cutting 35 police officers and 34 firefighters, closing two fire stations … and making excuses for Lantigua’s fiscal incompetence every step of the way.

Rivera also testified in favor of House Bill 1441 at a joint house and senate hearing in 2010.

Now, the born again Dan Rivera spends his days and nights coming up with new ways to publicly criticize Lantigua for his spending.

It would be oh so funny if it weren’t oh so sad for the people of Lawrence who have this kind of political theater to contend with while the city is crumbling and crying for leadership.

Working in Rivera’s favor in this race is his valiant military service and a network of political insiders in other communities. He is a former aide to Congressman Niki Tsongas and has the ear of high ups in state government. He is likable, and very bright.

However, the question that will haunt him, and the one that voters will have to square with his record is: How would Dan Rivera be different from Willie Lantigua?

If City Councilor Dan Rivera is going to try and convince voters in Lawrence to reject Willie Lantigua and chose him as their replacement, based on politically expedient attacks on his spending, he underestimates the Lawrence voters, especially Lawrence’s Dominican voters.

To most of Lawrence’s Dominican voters, Mayor Willie Lantigua is still a rock star. They support him, they are active, and they are the largest voting block in the city.

Though Lantigua’s antics have turned off many Dominican voters in Lawrence, most still support him.

If Dan Rivera thinks that he can lure away people who voted for Willie Lantigua in 2009 by becoming a Johnny-Come Lately convert on the “Willie Must Go” bandwagon, he first has to get past the fact that he was a driving force in every one of Willie’s spending “issues” since Lantigua took office

…. or at least until recently.