By John MacDonald on December 29, 2015Comments Off on Will Trump Prevail? 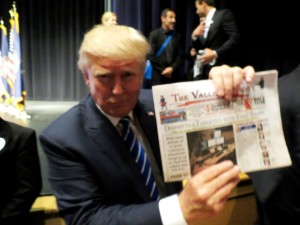 The question of whether or not Donald Trump will prevail as the Republican nominee for president or has a chance to run for president and win is extremely disturbing to the establishment in both parties. Trump has been bombastic, controversial, knee jerk, overly sensitive and unscripted. Everything a traditional politician is not, has never been and it’s working. Despite all of the things he has said, like them or not, politically correct or not, is somewhat appreciated and accepted by a silent majority. Donald Trump is feeding the silent majority that has watched a nation they love and cherish become something they no longer recognize.

President Obama ran on change, and the changes he has made does not appear to satisfy many Americans. Seven years of a progressive agenda has left many conservatives, moderates and even some liberals in a position of uncertainty. Americans have watched events and problems unfold that have been approached with anything but a traditional style or the values the country has held dear for generations.

President Bush was no prize either, and created an environment that made it possible for the country to elect a progressive President Obama. The country was ready for anything other than what resembled another President Bush style presidency. Now after another horrible seven years of anything but Bush, President Obama has created the political environment to usher in a President Trump. Seven years of over sensitive political correctness, disrespect for law enforcement, racial tensions reminiscent of the 1960’s, a soft economy with no real sense of job recovery, homegrown terrorism, ISIS and just plain uncertainty of where we stand in the world has created the conditions for Donald Trump to succeed.

So as “The Donald” continues to identify hot button issues with an almost “Nostradamus” pin point accuracy/nose for critical events, the evolution of his sensationalized campaign for president grows stronger in the polls. For what political experts predicted would eventually wear thin with the American people, instead grows significantly. The more Trump thumbs his nose at the press and a national media that seem to have a left leaning progressive agenda and are no longer trusted, or the more he’s criticized by the established right wing conservatives that throw millions to guys like Jeb Bush… Donald Trump will thrive.

Why? Because Americans really do want to be great again. We’re Americans! We believe in freedom and God. We think we’re the guys who wear the white hats and build incredible things. We pride ourselves on innovation and long hours of working hard. We crave success and are never satisfied. We’re the country that landed on the moon … FIRST! We don’t want to be like Europe or Europeans, because we despise their attitudes and we’re the country that was founded by people that kicked their asses out of Boston. We like winning. We don’t like losing.

Now do you get why Donald Trump is winning? Will he prevail? Time will tell, but as long as he continues to feed the beast of kick you in the crotch American patriotic pride… he just might.