By ValleyPatriot on October 3, 2020Comments Off on Witness at Nuremberg! PFC Joseph Alfred Ducharme US Army Air Corp ~ HERO IN OUR MIDST, VALLEY PATRIOT OF THE MONTH 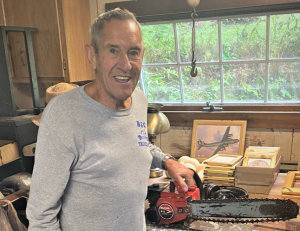 When called to active duty after graduation, while training at Keesler Air Force Base in Biloxi, Mississippi, Joe was informed by the US Army Air Corp, that they had “too many pilots”.

Required by the US Army Air Corp to pick another job to train for, the war had ended in May 1945 in Europe, and was getting very bloody in the Pacific Theater that summer, Joe chose to go to Buckley Field, in Aurora, Colorado to train as a Military Policeman. Sent to Europe after training, he arrived in France, and was put on a narrow-gauge railroad, called a “40 and 8”. Used first in World War I, these rickety trains transported Private First-Class Joseph Ducharme and his comrades to Munich, Germany.

Later moving to Ansbach, Germany, he was assigned to a 12-man squadron, attached to the 9th Air Force, patrolling Germany on 1940’s Harley Davidson motorcycles, specially built for the US Military. The war in Europe was won, but fighting continued with isolated German SS units, and the countryside was filled with armed men from partisan units, armed deserters from all sides, and some armed hard-core criminals, too.

I recall an incident from an earlier Veteran’s interview, on April 29, 1945, when soldiers of the 3rd Battalion, 157th Infantry Regiment, 45th Infantry Division liberated the Nazi concentration camp at Dachau, Germany, three young Jewish men went off to “say goodbye” to their German SS guard, they found him hiding in a shed, and beat him to death with a shovel. General George Patton refused to discipline any of the US Army soldiers who allowed the Jewish inmates to enact justice on their SS captors. PFC Joseph Ducharme was present and worked security at the famous Nuremberg Trials, where he met Rudolph Hess.

In 1948, he married Rita Bennett from Pelham, New Hampshire as well, she was an RN. They have four children, (all with advanced University degrees) five grandchildren, and nine great grandchildren. One of his fondest memories with his wife, was a train trip to Vancouver, British Columbia. His recall of the purchase of their first house in 1950, was uncanny, $3,000 for a house and ten acres. Financed at ¾’s of one percent. A seven-year mortgage with monthly payments of $49. He paid the house off in five years. He and his wife are members of Pelham’s First Congregationalist Church since 1950. He served as Trustee, Deacon, Sexton, and is now a Trustee Emeritus.

He worked at Greg and Sons, owned by the family of New Hampshire Governor Hugh Greg. After the company moved to Canada, Joseph went to work for Sommerville Lumber, finishing his career in Pelham, NH as their assistant store manager. He enjoyed playing golf with friends, coworkers, and customers. Once he scored a hole in one, at Pine Valley GC on hole number 9 in the Lion’s Club Golf Tournament. A Scoutmaster in Pelham, NH for five years, his favorite merit badge to work on with the Scouts was Hiking. He loved the 20-mile hikes! Joseph is very proud to be a charter member of the Pelham American Legion Post 100 and he participated in an Honor Flight on November 5th, 2019.

Now ninety-three years old, he ran for 35+ years, did many a half marathon, and still fishes for Strippers off Plum Island. He cut our first interview off, to go cut his lawn! He cut our second interview short, because he was cutting down trees on his 10 acres with a chain saw. How many of us will be able to cut our own lawn or take down a tree with a chain saw, when we are ninety-three?

The Dracut American Legion asks all World War II, Korean War, and Vietnam War Veterans, to call (603) 518-5368 and sign up for an Honor Flight to the Memorials in Washington DC! Veterans of all eras are asked to go to the American Legion’s Web site www.legion.org, and join the American Legion, preserving our Veteran’s Benefits for future generations.

Witness at Nuremberg! PFC Joseph Alfred Ducharme US Army Air Corp ~ HERO IN OUR MIDST, VALLEY PATRIOT OF THE MONTH added by ValleyPatriot on October 3, 2020
View all posts by ValleyPatriot →