By Tom Duggan on December 20, 2015Comments Off on Woman Calls Methuen Police to Complain Salem Police Trying to Pull her Over ~ Arrested on Fugitive Warrant

METHUEN – Methuen police were dispatched to an odd call Sunday when a woman dialed 911 on her cell phone to complain that a Salem NH police cruiser was trying to pull her over.

According to police communications, the woman was asking for Methuen police to stop the Salem police, from stopping her.

Methuen Police Officers Richmond and Souther handled the scene at 317 Pelham St., to find that the woman had been fleeing Salem, NH police with her minor child in the front passenger’s side of the vehicle.

Police tried to pull the woman over for failing to stop at a stop sign.

Methuen Police say that Salem  police had also contacted them asking for help stopping the vehicle, as the woman fled across the state line from New Hampshire into Massachusetts.

According to the police report, the woman, identified as Michelle Marchant of Garfield St. in Methuen. She was arrested by Salem officer Lawrence and charged with “felony reckless conduct” because she fled police with her minor child in the car.

Methuen Police took her into custody on fugitive charges as Marchant will be transferred to Salem NH for processing. The Clerk ordered her held without bail and she was sent to Middleton prison to be held overnight in the woman’s holding area.

She will be arraigned in Lawrence District Court Monday morning. 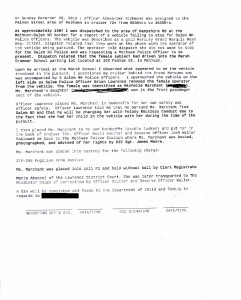 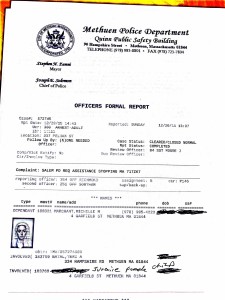 (as with all arrests, suspects are legally considered innocent until proven guilty in a court of law)

Woman Calls Methuen Police to Complain Salem Police Trying to Pull her Over ~ Arrested on Fugitive Warrant added by Tom Duggan on December 20, 2015
View all posts by Tom Duggan →