By ValleyPatriot on October 3, 2020Comments Off on ‘Yellowstone’ Delivers A Terrific Season, Dominates Cable Ratings ~ TV TALK with BILL CUSHING 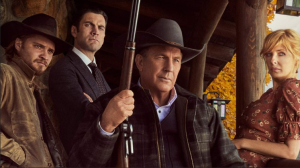 The show centers on the Dutton family, led by patriarch John Dutton (Costner), owners of the largest cattle ranch in the US. John’s kids don’t always see eye to eye with their father. Beth is a tough, ambitious corporate executive; Jamie is a lawyer who wants daddy’s approval; and Kayce is an Army veteran who married Monica, an American Indian, and now lives on the ranch with their son, Tate.

‘Yellowstone,’ like many good westerns, combines gritty action with the dreamy landscapes of America’s lush frontiers. All of the drama occurs in one of the most beautiful backdrops seen on television. This series is a visual feast, with stunning mountains, lovely vistas and spectacular camera work.

It also comes with a great cast. Costner is no stranger to westerns, and he is very comfortable in his role, delivering a terrific understated performance as the head of the Dutton clan. Luke Grimes as Kayce, and Wes Bentley as Jaime are serviceable in their roles.

Cole Hauser as Rip does a great job portraying the mysterious ranch hand who clearly has a history with Beth and who John thinks of as a son. But the scene stealer in ‘Yellowstone’ is Kelly Reilly as Beth. Beth is a ferocious business woman, handling the corporate side of the business, and uses her sexuality and family name like weapons. Reilly is a powerhouse in the role.

Much of what makes ‘Yellowstone’ worth watching is what sets it apart from other TV dramas. It’s the only western series currently on the air, unless you count HBO’s sci-fi series ‘Westworld’ as one. Beyond the simmering father-child tensions, there’s a vast world of stories within ‘Yellowstone’ that you’ll see develop as the series progresses. The writing on the series is top notch too, the dialogue is razor sharp and the characters are compelling.

‘Yellowstone’ was created and written by Taylor Sheridan. Before Sheridan skyrocketed to A-list feature screenwriter status with his Oscar nominated ‘Hell or High Water,’ and ‘Wind River’ (which he also directed), Sheridan was best known for playing Deputy Chief of Police David Hale on ‘Sons of Anarchy.’

Filming is already underway on Season 4, and the season is expected to premiere sometime in June.

‘Yellowstone’ airs Sunday nights on The Paramount Network and all 3 seasons are available On Demand and to stream on the Peacock network. If you’re looking for something to binge on, check it out.

If you have any questions about TV you can email me at BillsTVTalk@gmail.com.  I will answer all of your questions and will feature some of the questions I receive in a future Mailbag column. Follow me on Twitter and Instagram @BillsTVTalk and on Facebook at BillsTVTalk for daily up-to-the-minute TV news and discussion. ◊