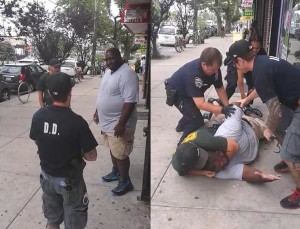 Somewhere in America today there are law enforcement officers that wear the uniform , a gun and a badge and perpetrate the greatest discharge of public trust because they are thugs. There are also criminals-some petty, some serious that perpetually push the envelope of civility through their derelict and lawless actions. In far greater numbers there are law enforcement officers who are dedicated servants of the public, sworn and capable to uphold the sacred trust. There are individuals who make bad choices and find themselves on the wrong side of the law.

There are no constitutional rights for resisting arrest as equally, there are no rights to unlawfully take a life or incarcerate a person by applying false or inappropriate authority. And so in America today the streets are filled with protesters, grand juries have grappled with impossible tasks and divisiveness dominates because justice is elusive.

On the Holy Grail of civil rights many pin their hopes for their version of justice to be meted out. But the reality is that no level of justice will adequately provide the salve to quell the outrage until there is a re-affirmation of trust between those who are in authority and those law-abiding people who believe they are under threat by that authority
There are no easy answers, but there are ideas that will put us all on the path to peace. Community policing is the highest priority and applicable everywhere. Public policy and resources must be committed to it. The use of special prosecutors in police brutality cases is also a must. This is necessary to diffuse the natural conflict of interest held by a grand jury prosecuting team who maintains a working relationship with a law enforcement agency.

And finally, there is due process fairly applied. If one breaks the law, there must be consequences. Those who wear the badge and feel entitled to not uphold the law and those who wage war against them should ultimately bear the burden of justice.

One Response to "You Have No Right to Resist Arrest"