By Tom Duggan on April 11, 2014Comments Off on A BLOODY DAY IN LAWRENCE~Bank Robber, CarJacking Keep Police in Lawrence, Methuen Busy 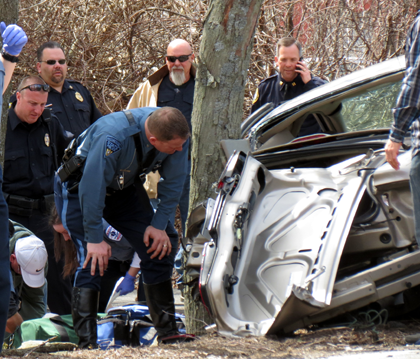 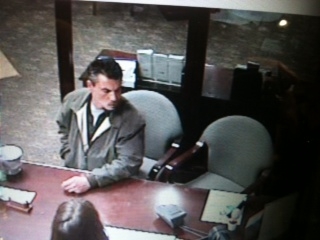 Lawrence and Methuen Police raced through the city early Friday afternoon, first in pursuit of a bank robbery suspect from Manchester NH who robbed People’s United Bank on Elm Street last Wednesday. The suspect handed the teller a note demanding cash. A manhunt ensued for the suspect.

Police got word that the suspect was in Lawrence early Friday afternoon and carrying a shotgun. Within seconds, Lawrence Police had spotted the suspect and began a chase down Lowell Street, through the Tower Hill area of Lawrence and onto Riverside Drive in Methuen where the suspect spun out, crashed into another car and eventually came to a stop at Waterfront Park on the Lawrence, Methuen line.

Police recovered the shotgun as medical technicians attended to his injuries. One officer at the scene said nobody was hurt “except for the bad guy, he’s banged up pretty good.” 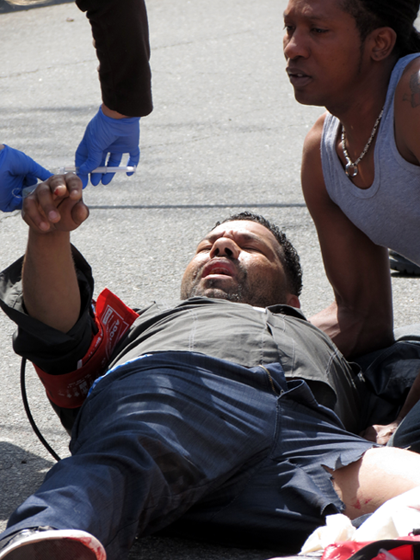 As officers were blocking off Riverside Drive and investigating the scene, a call came over the police radio describing a carjacking on Melvin Street in Lawrence only a few dozen blocks away.

Detectives and uniformed officers raced from the crash scene to the carjacking behind the Essex Street Projects where they found a man in his early 40’s laying on the ground bleeding next to the handgun that was used in the carjacking.

Police say that the victim refused to turn over his car to the carjacker and fought with his attacker(s) before being shot and pushed out of the car  and left to die.

The suspect fled in the stolen car. Police are still looking for the suspect(s).

Lawrence Police say that the man did not appear to have life threatening gunshot wounds but EMT’s worked on the man for more than ten minutes as bystanders looked on. One woman was visibly distraught as they took the victim into an ambulance and transported him to Lawrence General Hospital. 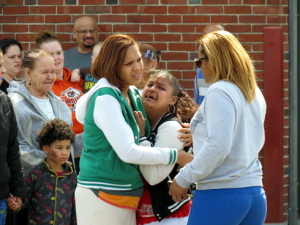 Lawrence Police Chief Fitzpatrick was initially scheduled to hold a press conference this afternoon at Lawrence City Hall but the press conference was cancelled. Lawrence Mayor Dan Rivera’s office says that they will send a press release if any more details are publicly available.