By ValleyPatriot on December 3, 2022Comments Off on ‘Acapulco’~ TV TALK with BILL CUSHING 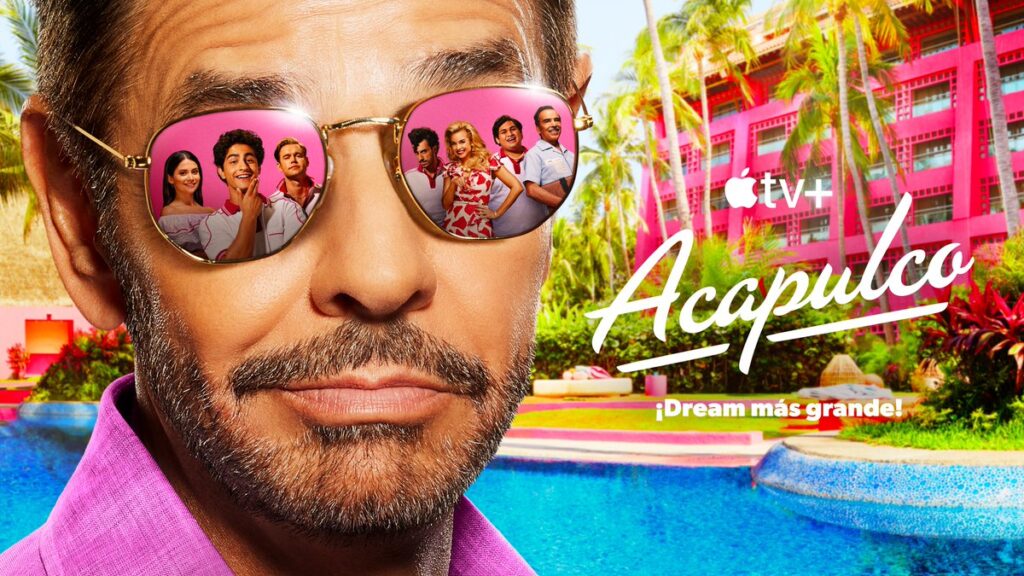 Maximo Gallardo takes in the view of the Pacific Ocean from his sprawling estate on a day off from his life as a financial mogul. He welcomes his young nephew Hugo over for his birthday and begins to tell him the tale of his own teenage days and how he became the man he is today. That is how ‘Acapulco,’ Apple TV+’s delightful bilingual comedy series, begins.

As the show jumps back and forth between present day and 1984, we are introduced to Maximo as a teenager, and to his friends and family. Maximo tells us that his dream job is to work at the fancy beachside resort, Las Colinas, which he sees as a way out of his mundane life, a chance to help his widowed mother and his sister, and a chance to rub elbows with the same ritzy folk that he has looked at and admired from afar his whole life.

Maximo is hired as a pool boy and his natural instincts and charm quickly make him a hotel staple, which helps him towards his goal of funding his mother’s eye surgery. We are introduced to the resort through his eyes, so we get to experience the hotel with the same awe and wonder as he does. The resort is bathed in bright colors that fill up the whole screen and reflects the series’ cheerful outlook on life. One of the show’s most realistic and smartest attributes is how it effortlessly jumps between English and Spanish. The workers at the resort are ordered to speak English around the guests, but they will speak their native language at other times.

Maximo begins to fall in love with the beautiful Julia at the front desk, who happens to be dating the resort’s general manager, Chad, whose mother is a former soap star and owner of the resort. Chad is an obnoxious guy who takes an instant dislike to Maximo, until Maximo helps him get over his fear of proposing to his girlfriend. Maximo also meets Don Pablo, who is the Head of Operations for the resort, and becomes a mentor and role model to him. They form an almost father-son type relationship by season’s end.

‘Acapulco’ is another winner for Apple, who continues to give us quality programming. The series treats us to wonderful heartfelt storytelling, as we see Maximo’s coming of age story unfold, and throughout the series, each episode features the very entertaining Spanish-language covers of various hit songs from the ’80s performed by Las Colinas’ poolside duo.

‘Acapulco,’ created by Austin Winsberg, Eduardo Cisneros, and Jason Shuman, and starring a terrific cast, with Eugenio Derbez and Enrique Arrazon as the adult version and as the 1984 version of Maximo, respectively. Camila Perez is charming as Julia, and Chord Overstreet is the perfect rich buffoon, Chad. Damian Alcazar as Don Pablo, Fernando Carsa as Maximo’s best friend Memo, and Vanessa Bauche as Maximo’s mother round out a great ensemble.

If you’re looking for something to pick you up and make you feel good, while giving you some laughs and nostalgia, watch ‘Acapulco.’
‘Acapulco’ is available to stream on AppleTV+, with new episodes every Friday.