By ValleyPatriot on August 16, 2013Comments Off on Adventures in Lawrence Election Fraud 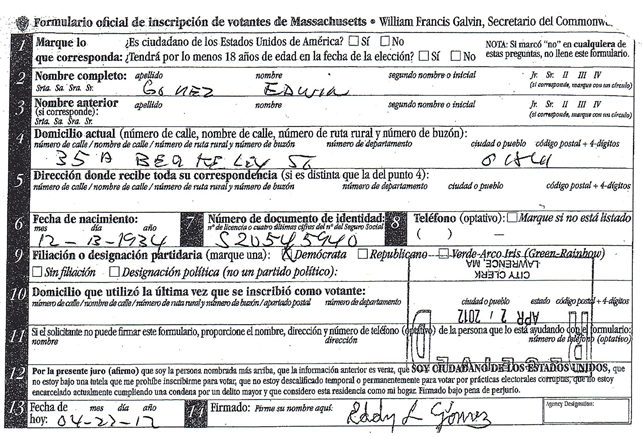 Anyone familiar with the city of Lawrence is aware of the lax record keeping and controls in various city departments, i.e. city garages and Inspectional Services to name two. Does anyone believe it’s any better in the Elections Department? Let me share my findings. I’ve been writing programs to examine the voter registration list and purged election lists (lists of those that voted in an election) in Lawrence for a couple of years. If you can describe it, I can search for it. Of course, my programs can’t really tell if two registrations correspond to the same person. Sometimes there are two people with the same name and birthday, both living at the same address, but rarely. This fall I obtained post presidential election voter registration and purged lists from the city.

I chose to investigate one pair of alleged duplicate voters from November, Edwin and Eddie L; they have the same last name, birthday, and were registered at the same address. Edwin and Eddy L were born in 1934, so their chance of being twins was small. On February 13, 2013, a FOIA request for various documents was filed with the City Clerk and was responded to on March 7, after a letter of complaint was sent to the state. My bill was $50.81 due to 3 hours of administrative time billed at $16.667 per hour with a small fee for copies. It is unclear if two ballots were cast in November 2012.

Although one registration was in person (Edwin: 4/27/2012) and one via mail (Eddy L: 9/14/2012), only Edwin’s registration card was found. I’m assuming that the search for Eddy L’s registration was the cause of my high bill. Massachusetts General Law (Title VIII, Chapter 51, Section 41) states “The registrars shall preserve all written applications, complaints, certificates and affidavits received by them, and all other documents in their custody relative to listing and registration, for two years after the dates thereof.” Ostensibly, I was charged because the Elections Department can’t keep its records in an organized fashion. I should be grateful they only spent three hours looking for it!

Given the different writing styles of the body of the registration card and the signature, it seems this form was filled out by one person and signed by another. An employee at the Secretary of State’s Election Division verified that the only time someone else should fill out the registration card for another is when that person is disabled and can’t write.

Should this registration form have been processed given the different names in the name field and signature field? As both names, Edwin and Eddy L, are on this form, you would think one of the Eddies’ registrations would have been removed from the voting list after researching my request. You would be wrong. Both were still on the voter registration list I received dated May 3, 2013.

What does one have to do to get duplicate registrations off the list? Massachusetts General Laws (Title VIII, Chapter 51 Section 48) states that upon receiving a registration challenge “the registrars shall examine into such complaint and, if satisfied that there is sufficient ground therefor, they shall summon the person complained of to appear before them at a certain place and time before the next primary or election or town meeting to resolve the issue.” On March 26 of this year, I formally challenged two other pairs of registrations that were obvious duplicates. Both in each pair were also credited with voting in November 2012. I thought this route would be cheaper than paying for the research time myself. A letter was sent to the Board of Registrars formally challenging the registrations. A week or so later I was told that the matter was being looked into, but as I had not given my letter in affidavit form nothing official could be done. All four of these registrations were still on the May 3, 2013 registration list.

Knowing Lawrence City Hall as I do, I made sure to call the City Clerk on Monday July 1 to inquire as to the correctness of my affidavit. William Maloney, the City Clerk, informed me that as Edwin and Eddy L had been merged together, there was nothing to investigate. He went on to say that periodically the state sends them potential duplicates to investigate, which leads one to believe the registrations had been merged at some earlier date as part of a routine process. A formal response dated July 3 showed that the Eddies had, in fact, been merged on June 28, the day the affidavit was submitted!

How much does it cost to correct the mistakes of city workers? What does it take to make the Board of Registrars do some work? The City of Lawrence pays Election Department workers a good wage for making mistakes, and well-meaning citizens have to pay to get the careless mistakes fixed. For a city that prides itself on helping the poor, heaven help the poor person who wants some transparency and accountability from the City of Lawrence. Money can’t buy that.