By Tom Duggan on May 7, 2006Comments Off on Al Perry Must Step Down!

Besides his general incompetence on the School Committee, Al Perry is a perpetual elitist insider who opposes reform, defends the status quo and is more concerned with being a member of the Good Old Boy insider’s club than he is in making our school system cost effective and educationally sound.

As if that wasn’t enough, Perry shamelessly voted with former committee Chairman Dan Murphy to hire Harry Harutunian less than one week before Dr. Charles Ormsby’s election, rushing to get a new superintendent on board before Ormsby, a well known conservative, could take office and have a say in the process.

Perry ignored warnings from parents and the media to move more slowly and investigate Harutunian’s background in Reading and Beverly, charging ahead to hire Harutunian despite public revelations by parents in Reading who started their own Web site chronicling Harutunian’s antics there. ( www.iror.org )

Perry also supported and lobbied for Harutunian to get a four year “rolling” contract, complete with mandatory arbitration (meaning, if they ever fire him they will have to pay him, no matter what). Perry then added insult to injury by voting each year to extend Harutunian’s contract by one year, meaning that no matter what, Harutunian would always have a four-year contract buyout deal coming if he was caught behaving badly.

Al Perry supported Harutunian’s budgets, dismissed parents’ concerns about Harutunian’s “creative funding” and then, as if all this wasn’t enough, when it was learned that Harutunian had an affair with his secretary (a secretary he gave hefty raises to, and abused taxpayer-funded cell phones to chat with during the school day), Al Perry then continued to defend Harutunian and negotiated a $187,000 buy-out offer (thanks to the provisions HE supported in Harutunian’s contract). And, as part of the deal with Harutunian, Perry agreed to keep the details of Harutunian’s bad behavior (and the committee’s complicity) sealed and confidential. How convenient!

While the Harutunian controversy was going on, Perry and the School Committee were so bold as to bring on former committee 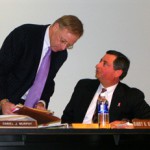 Chairman Dan Murphy as a “consultant” so that he could stay in the loop after leaving office. And if that isn’t bad enough, now we learn that Perry is recommending Murphy to lead the new committee being assembled to actually select our next school superintendent. Huh?

But, here’s the best scam of all: If the details of the Harutunian pay-off (oops, I mean “buy-out”) become public now, the town could be on the hook for yet ANOTHER payout to Harutunian because Perry made sure Harutunian’s legal deal with the town included confidentiality, so that the details of all that may have happened would never be released to the public.

If the parents of North Andover do not demand the resignation of Al Perry before a new superintendent is chosen, the town will be stuck with Perry making the decision on who the next superintendent will be. Another superintendent like Harutunian?

And then the process starts all over again, with Perry and the School Committee approving rolling contracts, $10,000 bonuses, blindly voting for the new guy’s pet projects, vilifying anyone who asks for accountability and a school system where teachers have to buy their own copy paper.

And how can anyone forget the famous Perry Plan? It called for shutting down the Steven’s Library to help fund the out-of-control abyss called the school budget. Even the local newspapers have ridiculed such a plan, now referred to as Perry’s Folly.

Do the right thing Al … Step down for the good of the town.